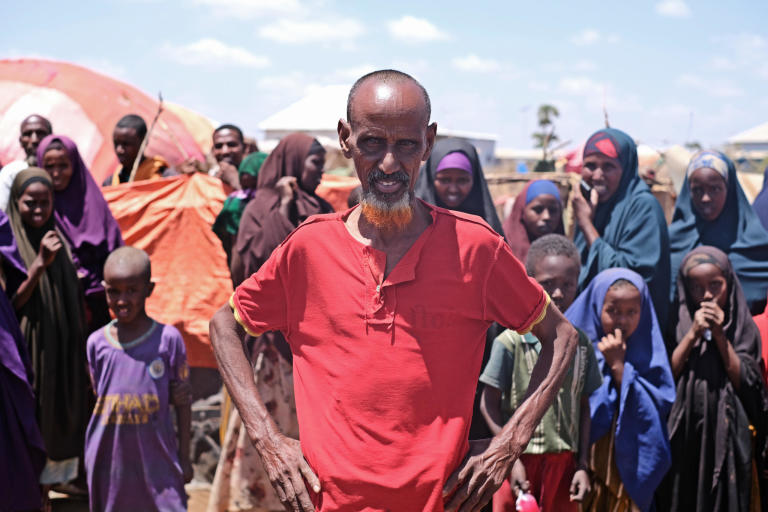 
What is a famine?

Paul Ireland Published 22. Sep 2022
Somalia Climate change Environment Livelihoods and food security
Read caption When his camels died, Hussein fled with his eight children to Baidoa, south-west Somalia. Photo: Abdulkadir Mohamed/NRC
Somalia stands on the brink of famine. After months of catastrophic drought, the United Nations has issued a “final warning”, as the most dangerous period of the crisis approaches. But what actually is a famine? Who decides when a famine is happening, and what does it mean when they do?

On 11 August 2022, the drought in Somalia reached unprecedented levels. For the first time, one million people were registered as having been displaced by the drought since it began in January 2021. “This one-million milestone serves as a massive alarm bell for Somalia,” said Mohamed Abdi, NRC’s country director in Somalia. “Starvation is now haunting the entire country.”

Since then, the situation has worsened. Last week, the UN’s Under-Secretary-General for Humanitarian Affairs and Emergency Relief Coordinator, Martin Griffiths, gave a press briefing from Somalia’s capital Mogadishu. He described the devastation, suffering and death he had witnessed, but explained that “we have not met the technical thresholds for declaring [famine] yet”.

The word “famine” is often used loosely to describe a situation of extreme and widespread hunger. But it also has a more precise definition in a humanitarian context. At the heart of this definition is the idea of “food insecurity”.

The five phases of food insecurity

When we say that people are food secure, it means they can access sufficient nutritious food on a regular basis. When people are food insecure, it means that their food supply isn’t guaranteed. Perhaps they’re struggling financially and can’t always afford to eat well. Or perhaps there simply isn’t enough food to go round in the area where they live.

In 2004, the UN devised a system for monitoring food insecurity in populations. The system is called the Integrated Food Security Phase Classification, or IPC for short.

It describes five levels, or phases, of food insecurity:

Phase 1: Minimal. People can get enough nutritious food without major changes to their everyday lives.

Phase 2: Stressed. People have minimally adequate diets but struggle to meet their other needs.

Phase 3: Crisis. Some people can’t get enough food and have high levels of malnutrition. Others are forced to use up their savings and other assets to support their basic food needs.

Phase 5: Famine. People are unable to access food or meet their other basic needs. At least one in five households face extreme food shortages, and at least 30 per cent of children suffer from acute malnutrition. Each day, at least two out of every 10,000 people die of starvation or malnutrition-related disease.

Why do we need the IPC system?

The main purpose of the IPC system is to provide information to decision-makers so that they can take action to stop crises getting worse. The system looks at different aspects of food insecurity, including urgent medical needs, urgent food needs, and issues that are more persistent or seasonal such as repeated crop failure.

This analysis helps to identify what kind of intervention is needed – for example, whether it should take the form of emergency aid or longer-term development assistance.

Governments, UN agencies, NGOs and other stakeholders work together to monitor IPC levels in parts of the world where food insecurity is a concern. When IPC 3 (Crisis) is reached, these organisations mobilise to take urgent action.

In Somalia, nearly 6.7 million people are currently facing IPC 3 or worse – that’s more than 40 per cent of the country’s population.

What happens when a famine is declared?

The decision to declare a famine is usually made jointly by the government of the affected country and various UN and other international agencies. It’s a complex process involving a lot of analysis and negotiation.

While this process is going on, famine-like conditions may already be afflicting parts of the country. In Somalia right now, for example, some 1.8 million children are thought to be acutely malnourished.

The declaration of a famine doesn’t place any formal obligations on the UN or its member states. However, it does help to focus the world’s attention on the problem – and thus generate emergency funding.

Where is food insecurity an issue?

According to the World Food Programme (WFP), there are more than half a billion people with insufficient food, and 16 countries with very high levels of hunger. Food insecurity is an issue in many different parts of the world, from Central America to Afghanistan, and the picture is constantly changing.

You can view the latest hunger hotspots on the WFP’s online hunger map.

The most common cause of famine is drought. Other causes include flooding, crop disease, conflict, and political neglect or persecution.

Often, a combination of factors comes into play. In Somalia, a long-running conflict has exacerbated the effects of the ongoing drought. In addition, food prices in the country have risen steeply following the outbreak of war in Ukraine. Somalia used to rely on Russia and Ukraine for 90 per cent of its wheat, and has now been forced to find alternative, more expensive, food sources.

Climate change is contributing to more frequent, and more severe, droughts and floods around the world. We can expect food insecurity related to extreme weather to increase in the years to come.

Famines are often thought of as “natural disasters”, but they are usually caused to a large degree by human actions – or lack of action.

How common is famine?

In the last decade, famine has been declared on two occasions.

The famines in Somalia in 2011 and in South Sudan in 2017 resulted in the deaths of tens of thousands of people. These extreme crises were mainly driven by a combination of conflict and erratic weather patterns.

However, it’s important to note that death and suffering linked to food insecurity happen even when there isn’t a famine. In fact, by the time a famine is declared, children will already have started to die because their parents cannot give them enough food to survive.

That’s why it’s important to take decisive action early. In 2017, the international community helped to avert famine in Somalia and other parts of East Africa because it took early action. An even greater effort is needed now if we are to avert catastrophic loss of life.

What is NRC doing to help?

The Norwegian Refugee Council (NRC) has been supporting people displaced by conflict in Somalia since 2004. We also assist those affected by drought and other environmental factors.

Between January and August 2022, we reached 636,768 individuals as part of our Somalia Drought Response Plan, including: