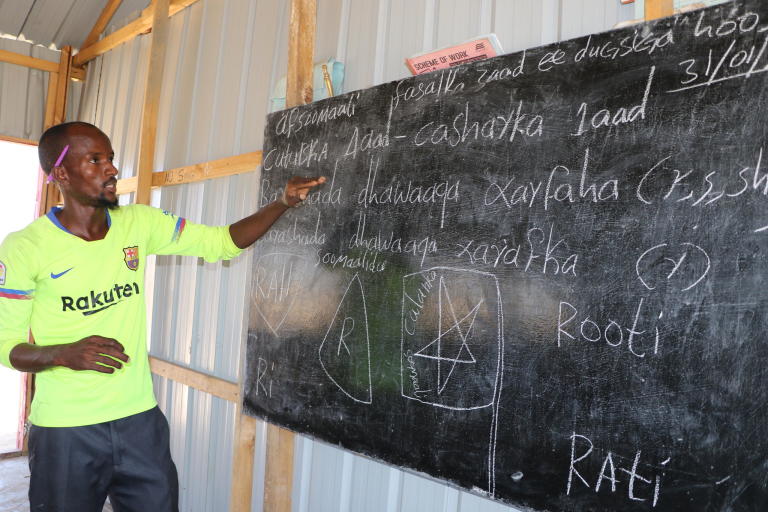 The vital role of teachers: to provide security amid chaos

Ina Eriksen Eines Published 26. Aug 2021 Edited 24. Aug 2021
Global Education
Read caption Abdi believes education is the key to the success of communities affected by conflict and poverty. Photo: Abdulkadir/NRC
We all have that one teacher we remember from our time at school. The teacher who made maths make sense or who made old-fashioned novels come alive in the classroom. For displaced children, teachers can provide security and hope in a life filled with conflict, chaos and uncertainty.

“When I’m in the classroom, I always have a lot of energy and enthusiasm. I want to help the next generation become tomorrow’s leaders.”

It is not without reason that Abdi is so focused on ensuring that displaced children receive an education. As a child, he and his family were forced to flee their home village of Barsanguni in Somalia.

Abdi’s greatest wish was always to go to school, but his parents couldn’t afford to pay the tuition fees. It was hard enough to get food. But this didn’t stop Abdi from dreaming of an education.

When he was 15, Abdi went to Somalia’s capital, Mogadishu, to study. “I have always dreamt of being a role model for children, to give them an education,” he says.

Abdi strongly believes that education is the key to the success of communities affected by conflict and poverty. After graduating, he returned to his hometown of Barsanguni to teach children who would not otherwise be able to go to school.

I get up every morning because I want a better future for my children, and for all the children in Somalia. I believe that education is the only way to get Somalia back on track.
Abdi Abdullahi

Somalia is one of the countries in the world with the most displaced people, and where the fewest children are enrolled in school. Over three million children are out of school. Often, parents cannot afford to pay school fees. In addition, the journey to school can be both long and dangerous for the children.

Did you know that less than half of displaced children go to school? Support our work so that more children can receive an education.

Children and young people who are suddenly uprooted and forced to leave behind everything they know need protection and stability.

At school, children are protected from violence. They are protected from being forced into child labour or prostitution, and from being recruited into armed groups. In a crisis, education can save lives and give hope for the future. It is important to have a safe place to go to when your daily life is filled with chaos and insecurity.

“The children are eager to learn. Some of them walk long distances to get to school every morning,” says Abdi. The school where he works is the only school in the area, and both the morning and afternoon classes are full.

The children don’t have much. But despite everything they are going through, I try to always inspire them to learn so that they can have a better future.
Abdi Abdullahi

For NOK 250 (approximately 28 USD), we make sure that a displaced child receives a backpack, complete with schoolbooks and writing materials.

Education is an investment in children’s future

In Zaatari camp in Jordan, 34-year-old Mohammad is busy teaching.

“I have been teaching maths for five years now. I love teaching, and I love mathematics,” he says.

In 2013, Mohammad himself was forced to flee his hometown of Daraa in Syria. He had been an accountant, but as a refugee it was difficult to find a job. He now works as a maths teacher at the Norwegian Refugee Council’s (NRC) learning centre in Zaatari, one of the world’s largest refugee camps. It houses nearly 80,000 Syrian refugees.

School is important even during a crisis. Having somewhere familiar to go provides children with a sense of security. At the same time, school can contribute to stability and peace in a war-torn country and having an educated population will be important when the country is finally able to rebuild.

Education is an investment, not an expense. If we fail to educate children, it will affect them for the rest of their lives.
Mohammad

For NOK 250 (approximately 28 USD), you can make sure that a displaced child receives a backpack and schoolbooks. Become a monthly donor and support our work for displaced children and young people here.

“The coronavirus made things difficult. Many of the children were stressed, and so were we. But we did our best to reassure them and engage them,” he says.

Mohammad is thriving in his new role as a maths teacher. “I like working with children. They are so innocent and they want to learn. It’s so exciting.”

Schooling is helping to rebuild the country

Zahrah Amin Ahmed Mohammed, 35, lives in the Al-Mishqafa camp in Yemen, where she also teaches at the camp school.

Zahra strongly believes that giving the children an education is the way to rebuild the country.

We teachers are educating a generation, to create a brighter future for our children.
Zahra Amin

Education has been a hobby and a passion for Zahra since she was little. As she got older, she realised that she wanted to be a teacher, that it would be her way of giving something to others. She says that the children she teaches are eager to learn, and that they even sometimes come in during holidays.

For NOK 400 (approximately 44 USD), you can give a child in famine-stricken Yemen school meals for one semester. Become a monthly donor today!

Zahra believes that we must invest in children and their education. Education enables children to learn how to deal with a daily life full of challenges and make progress. She says that it is especially important to prioritise education for children who are out of school.

After more than six years of war, Yemen’s public services face collapse, and more than two million children are out of school. Many more have lost months or years of their education due to the war.

If [the children] receive education and support, they can give this war-torn country a bright future.
Zahra Amin

It is important to get the children back to school. But it is not enough just to have a school to go to. What children learn, and the way they learn it, must be of high quality. Good teaching requires good teachers, which is why NRC invests in teachers.

In 2020, NRC provided education and good teaching for over 1.1 million people. In Yemen, it costs just NOK 2,000 (approximately 220 USD), to train and guide teachers so that they can provide support and care to children living in difficult situations.

Support our work so more children can go to school