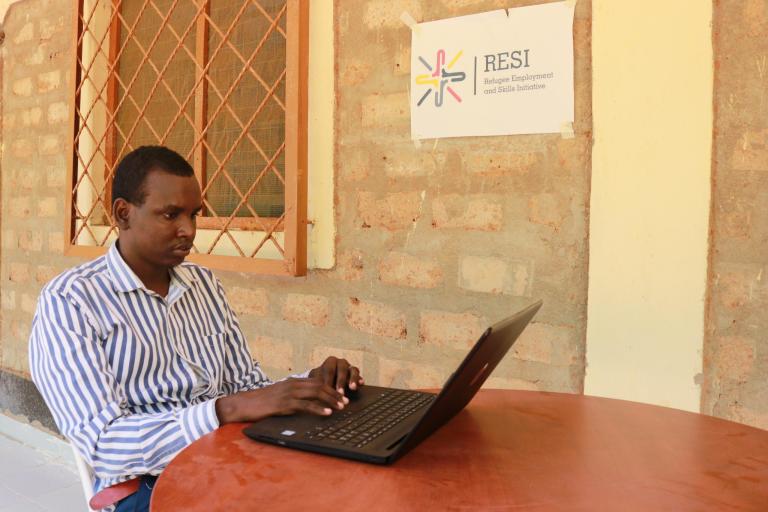 Paul Ireland Published 31. Mar 2021
Kenya Donors and partners Livelihoods and food security Youth Innovation Corporate sponsors Training
Read caption Ali Hassan Abdi is a graduate of a pioneering new NRC training programme that will see hundreds of young refugees become online freelancers. Photo: NRC
With his laptop and stylish striped shirt, Ali Hassan Abdi looks like a typical digital freelancer – someone you might expect to see working while sipping a “flat white” in a smart city cafe. But Ali Hassan’s background is a little different from most freelancers. Originally from Somalia, he is currently living as a refugee in Kenya’s Dadaab camp.

Ali Hassan is a graduate of a pioneering new NRC training programme that will see hundreds of young refugees become online freelancers. Like the other trainees, he is keen to make the most of his new skills.

“Because we now have the knowledge, we are pushing ourselves,” he says.

The Norwegian Refugee Council works to support refugees and displaced people in over 30 countries around the world, including Kenya. Support our work today

Dadaab camp was first established in 1991, when refugees fleeing the civil war in Somalia started to cross the border into Kenya. Today it is home to over 220,000 refugees and asylum seekers, and is so vast that it has been compared to a city.

“A few years ago, Dadaab was one of the biggest refugee camps in the world,” explains NRC’s Area Manager, Robert Inzikoa, who works within the camp. “It hosted over half a million refugees. So many refugees have been born, have grown and gone to school and married here!”

Despite its size and longevity, Dadaab is not a permanent solution for the people who live there. The Kenyan authorities have attempted to close the camp on several occasions, and most residents want to return home as soon as it is safe and practical to do so. But to do this successfully, they need the skills and tools to support themselves.

Training for the global marketplace

Training programmes for refugees have traditionally focused on manual skills, such as welding, carpentry, tailoring and the like. These are useful skills to have in a refugee camp, where the infrastructure is basic and resources are few. However, the rapidly growing digital economy demands a different sort of expertise.

Now, a new programme based in Dadaab is looking to the future. The Refugee Employment and Skills Initiative (RESI), run by NRC in partnership with the International Trade Centre and funded by the Dutch Ministry of Foreign Affairs, is training young refugees in the kind of skills that they can use in the global digital marketplace.

James Wang’anya is an NRC education officer who helps to run the RESI programme. He explains:

The subjects on offer are a world away from welding and carpentry.

“We are offering a range of courses as part of the programme – for example, graphic design, digital journalism, digital marketing, data entry, translation and photography,” says Wang’anya.

New hope for a generation

The programme is bringing new hope to a generation of young refugees. Ely Eraghone Hamuli is one of the students on the programme. He originally fled from the Democratic Republic of the Congo.

“I did my primary and secondary school back in Congo, and I obtained my diploma in Form 6,” he says. “Since I came into the refugee camp – I’ve been here for nine years now – I’ve been living jobless with no hope for the future.”

Since I joined the programme, I’m seeing myself as a part of this world. As someone who is going to achieve a lot.
Ely Eraghone Hamuli, digital trainee

“But when I heard about NRC offering courses like digital skills and graphic design, I said to myself: ‘Now I can achieve my goal. Now I can reach my bright future.’”

“Since I joined the programme, I’m seeing myself as a part of this world. As someone who is going to achieve a lot.”

The programme is targeted at young people aged between 15 and 35, and trainees are expected to have good reading, writing and computer skills before they enrol. The training typically takes between 12 and 16 weeks and is delivered by local digital specialists.

But the technical training is just the start of the process. The trainees then receive mentoring in business skills, life skills and entrepreneurship, to help them set up as online freelancers.

Those who successfully complete the programme join a cooperative called the Dadaab Collective. This is the refugees’ very own digital agency. It allows them to pool their resources so they can market their services to the outside world.

Wang’anya explains: “The Collective is run by the youth themselves. It’s legally registered, with its own bank account and management structure. The Collective allows the graduates to source jobs en masse, and it’s good for motivation and support. Sometimes they even subcontract each other.”

Ali Hassan graduated from the programme a year ago.

“When I did my course, I was ‘onboarded’ with mentorship,” he recalls. “After one month I got my first job in data entry. I did my job and got five dollars.”

“Earning those five dollars really motivated me to go for more jobs because I realised that earning online was possible. It also helped to buy 3GB of data bundles that I used for working at night when I could not connect to the NRC free internet. Most importantly, it helped me provide a proper meal for my family that day.”

Not only me, but many youths in the camp – my classmates from the same cohort – have all earned money
Ali Hassan Abdi, digital graduate

From this small beginning, Ali Hassan progressed to bigger and better-paid jobs. “Right now, I have a lot of projects,” he says. “Not only me, but many youths in the camp – my classmates from the same cohort – have all earned money.”

Freelancing has opened a totally new frontier for the trainees in an otherwise harsh environment with limited opportunities. Dreams are being unlocked. The 30 freelancers who have undertaken projects via the Collective since it was set up in September 2019 have now earned thousands of dollars between them.

Mohamed Omar is a Dadaab freelancer specialising in English-Somali translation. The eldest child in a fatherless family of six, he has earned a monthly average of USD 700 since June 2020 – enabling him to pay for his family’s needs. He has also been able to expand his skills through online courses and venture into photography and videography, funded by his freelancing income.

Another freelancer, Osman Abdullahi, is using his earnings to study for a Diploma in Human Resource Management at the Kenya Institute for Professional Studies (KIPS). In a good month, he takes home USD 500 – which has also helped him to provide for his family and pay the medical bills when his father became ill.

The power of a platform

Key to the graduates’ success is their ability to sell their services online via international freelancing platforms. “There is a platform called Upwork – NRC has helped me to open an account. Not just Upwork, but also Guru and other platforms,” explains Ali Hassan.

View the Dadaab Collective agency page on the Upwork website

As a result, the Collective has managed to secure work not only within Kenya, but in places as far afield as the United States, Egypt, Italy and China.

The feedback from clients so far has been highly positive. Elimu TV is an educational TV channel based in Nairobi that has been working with the Collective:

“Elimu TV was honoured to work with five freelancers from the Dadaab Collective freelancing agency who helped us mobilise northern Kenya to take up continuous learning through our Zoom class and online platform, Edutopia. The freelancers were very committed to the programme.”

Meanwhile, the International Trade Centre has been benefitting from the Collective’s translation skills:

“We hired the agency to translate the content and record the introductions of an online course on entrepreneurship, from English into Somali. The agency is very professional, they were very reactive to our questions and deliver with really good quality, and within our deadlines.”

The graduates of the RESI programme have had a taste of success – and they’re hungry for more.

As with all freelancing, building relationships with clients is key. Ali Hassan is keen to secure bigger projects as his experience and reputation grow.

“I am expecting to go back to my country. In the future I want to go to Mogadishu where I can get stable internet connectivity and the design software I need.”

The initiative has the potential to be a huge win-win for both employers and the refugees themselves – and a model for future humanitarian training.

Read more about our work in Kenya