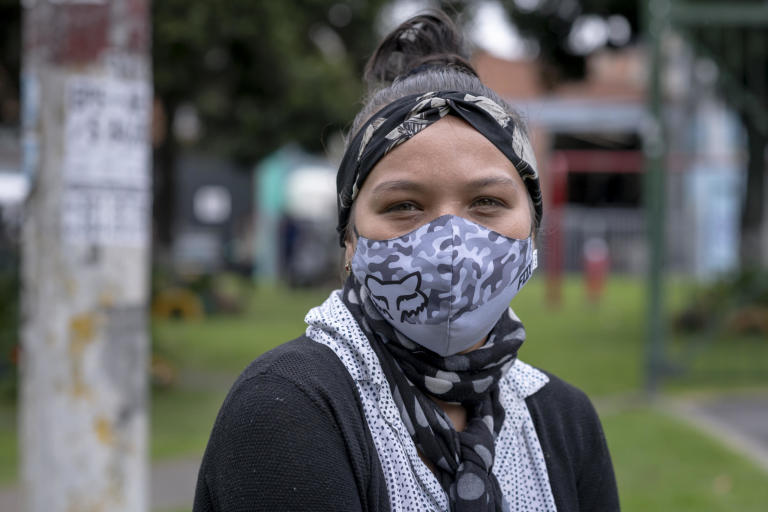 
Voices from a neglected crisis

TEXT: Roald Høvring PHOTO: Nadège Mazars Published 31. Jul 2020
Colombia Coronavirus
Read caption Kendry Castro is among more than five million refugees and migrants that have left Venezuela for other countries in Latin America and the Caribbean in recent years. Nadège Mazars/NRC
“My message to the world: it is sad, it is hard, and it is humiliating.”

This is the voice of Kendry Castro, a 23-year-old Venezuelan living in Colombia. She is among more than five million refugees and migrants that have left Venezuela for other countries in Latin America and the Caribbean in recent years.

The Covid-19 pandemic is now forcing tens of thousands of people like Kendry to live in deep poverty or depend on humanitarian aid, as lockdown measures prevent them from earning a living.

Photographer NADÈGE MAZAR met with some of these Venezuelans as they were receiving a cash grant from NRC in the Colombian capital of Bogota.

Kendry Castro, 23, has two children, aged one and three, and originally comes from Merida in north-west Venezuela.

First her husband left to search for a living in the Colombian capital Bogota. Six months later he sent her money so she could join him, and she came to Bogota together with her two children. She had just finished school, and her dream was to study medicine.

In Merida, her husband had a motorcycle workshop. In Bogota, he found a job working in a fruit shop at the market.

But with the virus, he lost his job. And now, he's out on the street looking for trash to sell for recycling.

Due to the pandemic the schools are closed, and Kendry stays home with her two children.

In the face of such adverse conditions, some Venezuelans have decided to return home as their livelihoods have dried up abroad. As of 30 June 2020, more than 80,000 had returned from different parts of Latin America. Some of them walking long distances by foot.

“We are doing what we can to support and protect Venezuelan refugees and migrants. In Colombia we are providing cash to vulnerable families and to host communities,” says Dominika Arseniuk, Country Director with the Norwegian Refugee Council (NRC) in Colombia.

NRC is giving financial support to Venezuelan refugees and migrants over a period of six months. We are also providing workshops to help them cope with the trauma and stress that many of them are experiencing.

Humiliated and discriminated against

Kendry can’t work, and this is the first time she has received any help in three years. The other day she started crying because she wanted to leave. She called her mother in Venezuela and told her she wanted to go back, but her mother answered: “No! Don't come. Look at the problems. Think of the children.”

When asked what she would say to the world about her life as a refugee, Kendry answers:

Arseniuk explains: “The biggest factor that makes Venezuelan refugees particularly vulnerable is that they often do not have regular legal status in their host countries. This means they have limited access to formal employment, reliable shelter, or public health services.”

Living in the slum

Angie Carolina Burgosa, 33, has been in Colombia for four years. She has ten children.

In Venezuela, the situation had become hard for her family. Food shortages began to affect her children to the point that they lost weight, and they were dehydrated.

Angie stayed on the street for a while. But the social services took two of her kids away from her. Now she is living in a slum called “Paraiso” (“Heaven”), with four of her daughters. Her oldest daughter is 16 and already mother of a two-year-old child.

Selling coffee on the street

Lisbeth Chiquinquira, 53, is a mother of seven and is originally from Maracaibo in Venezuela.

"Here I am working selling coffee on the street. Thank God, I did very well last year, but after the pandemic I have not been able to work. I go out with my thermos, but people are afraid of the virus and do not buy anything,” she says.

One of her sons stayed behind in Venezuela, where the family has a small house.

“I keep telling him that he should not come here. Yesterday he called me and said: ‘Mommy, I want to leave’. But no. The situation is very difficult. Just to get him over the border they are charging USD 100. And right now he might not be able to cross the border at all.”

"After the pandemic everything has changed. I am not really selling anything,” says Javier David Mendez Salcedo, 28, who tries to make a living selling candy on the busses.

He is living downtown Bogota with his wife and two kids. He rents a small room, with a shared bathroom and kitchen, which they must pay for every day. He brings in 14,000 pesos every afternoon, a little under USD 4.

Back home in Venezuela, Javier was a technician working with alarms and security cameras.

“
Since the virus hit, I do not even have money for soap to wash our hands, and If I am lucky, I am able to give my children one meal a day.
Javier David Mendez Salcedo, 28

“When I lost my job, we came here searching for a living and a better future. In the beginning we managed to pay rent and food. Since the virus hit, I do not even have money for soap to wash our hands, and If I am lucky, I am able to give my children one meal a day.”

Javier says that the worst thing is the xenophobia. “Here a Venezuelan is a thief to everyone. Six days ago, I was arrested … and held in captivity for 72 hours. The children were starving.”