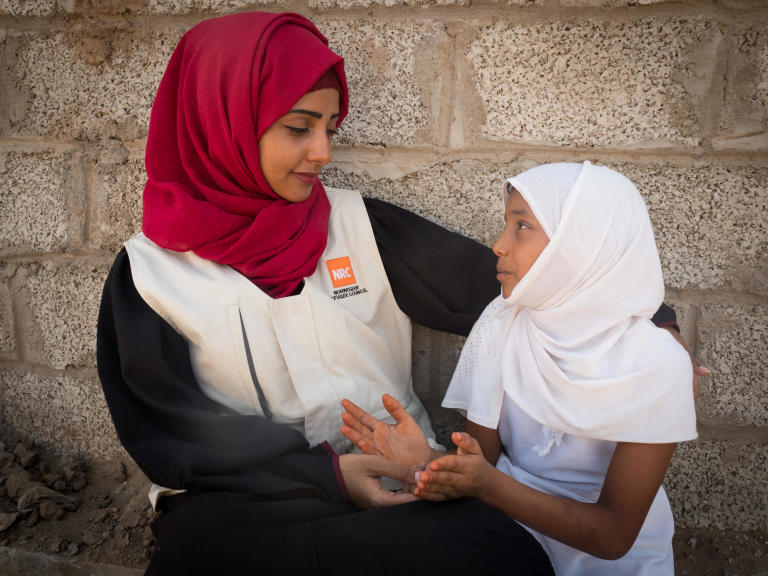 Eirik Christophersen Published 07. May 2019
Camp management Education Livelihoods and food security Information, counselling and legal assistance (ICLA) Shelter and settlements Water, sanitation and hygiene promotion (WASH)
With the help of our supporters, the Norwegian Refugee Council provided assistance and protection to 8.5 million refugees and people displaced in their own country in 2018, spread over 31 countries.

"NRC colleagues reached 8.5 million people in need last year, in areas with massive displacement. Few know how dangerous and difficult it is to serve communities in need within conflict zones. I’m proud to be working with such dedicated colleagues in the world’s worst displacement crises," says NRC’s Secretary General Jan Egeland.

NRC specialises in six main activities in the field. Food security helped most people in 2018, and also saw the largest increase from the previous year. In total, we provided 2.7 million people with food or livelihoods. Clean water and improved sanitation was our second largest activity, and helped 2.5 million people. Shelter, legal aid and education followed and all had an increase from the previous year. Camp management experienced a decline from 2017.

This is how many people we assisted in some of the world’s worst crises:

SOUTH SUDAN: 1,226,000
The humanitarian situation in South Sudan has been critical for several years following the outbreak of civil war in 2013. The peace agreement in September 2018 has given some hope, but the peace is fragile and many dare not return home. In 2018, NRC contributed to food security for 930,000 people. NRC also assists many people from South Sudan in neighbouring Uganda.

YEMEN: 706,000
2018 was a disastrous year for Yemen, and the United Nations describes it as the world’s worst humanitarian crisis today. Conflict, economic deterioration and non-payment of public salaries have left two-thirds of Yemen’s population – over 20 million people – in need of humanitarian aid, and there’s a threat of widespread famine. NRC ensured that half a million people received food and provided clean drinking water to over 200,000.

SOMALIA: 658,000
Somalia has undergone one of Africa’s most prolonged humanitarian crises and the level of conflict increased again in 2018. NRC contributed to providing food security and clean water for 270,000 people displaced inside Somalia, in addition to providing education and legal aid and building homes for thousands of people. NRC also helped Somali refugees in Kenya and Ethiopia.

DR CONGO: 643,000
DR Congo has for many years been among the countries in the world with the most internally displaced people. In 2018, there was a 70 per cent increase in hunger from the previous year. In addition, Ebola broke out at the end of the year. NRC contributed with food security to over half a million people, built homes for over 340,000 and provided education to more than 200,000. NRC also assisted Congolese refugees in Uganda.

ETHIOPIA: 545,000
Ethiopia signed a peace agreement with neighbouring Eritrea in July 2018, and there are positive developments in several areas of Ethiopia. Despite this, there are still millions of internally displaced people in the country because of ethnic-based conflicts. Ethiopia is also host to a large number of refugees from Eritrea, Somalia and South Sudan. NRC provided housing for 200,000 and clean water for nearly 300,000 refugees and internally displaced people in Ethiopia in 2018.

SYRIA: 482,000
More than six million people are still internally displaced in Syria, and even more have fled to other countries. Despite the fact that the fighting in Syria has decreased, it is still unsafe for most people to return. NRC has helped hundreds of thousands of internally displaced people throughout Syria gain access to education, food, legal aid, shelter and clean water. NRC also provides assistance to several hundred thousand Syrian refugees in Jordan and Lebanon.