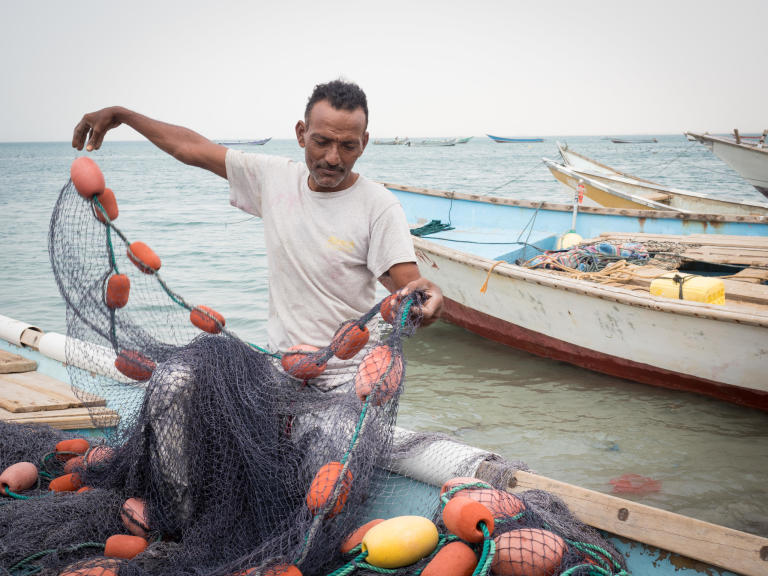 How NRC makes a difference


Fishing for a future

Coastal communities have suffered greatly in Yemen’s ongoing bloody conflict. Fishing boats, ports and processing sites have been destroyed or damaged, and many fishermen have lost their lives. NRC is helping to revive the industry, rebuilding essential facilities so that fishermen like Suleiman can continue to support their families.

In the chaos of flight and its immediate aftermath, displaced people often struggle to get enough to eat. In the longer term, the food production systems and livelihoods that they rely on are frequently disrupted or destroyed altogether.

At NRC, we believe that everyone should have access to sufficient, safe and nutritious food. We work to ensure that displaced people have enough to eat and are able to go on feeding themselves and their families, whatever the future may bring.

The war in Yemen began in 2015. As the conflict raged, the Saudi-led coalition launched airstrikes which hit fishing boats and markets, and mines were laid in the sea making the waters treacherous. “We felt fear at sea because of the war, the battleships and the mines,” Suleiman recalls. “I know many fishermen who have been killed at sea and in the fish market.”

As the fighting drew nearer, Suleiman and his neighbours began to store food, worried that they would not be able to leave their homes. When the violence reached his neighbourhood, he had to take a tough decision. Fearing for his children’s lives, he decided to flee.

Suleiman sold his animals and his wife’s jewellery to pay for the trip. He and his family left with only the clothes they were wearing. They travelled for three days, arriving at last in Ras Emran, a coastal village near the southern city of Aden. “I do not know if my house was hit or stolen,” he reveals. “The most important thing is that my family and I are safe and secure.”

Helping fishermen back on their feet

Once the country’s second biggest export behind oil and gas, the fishing industry in Yemen was in danger of collapse. “In Yemen, fishing is an important but neglected sector,” explains Qayyum Shah, livelihood manager with NRC in Yemen. “NRC is supporting fishermen by rehabilitating fish landing sites and fish markets. We are also providing fishing gear and safety kits to fishermen.”

Another NRC project is helping coastal communities to diversify their livelihoods so that they are not completely dependent on the sea. We are training 600 women to acquire skills that will enable them to develop their own small businesses, so they can generate an income of their own.

Meanwhile, Suleiman is fishing again in his new home in Ras Emran, sharing a boat with other fishermen. Life is hard and he misses Hodeidah, but he is able once again to earn a living to help support his wife and seven children.

Suleiman is one of more than 2.6 million people around the world who benefited from our livelihoods and food security programmes in 2018. Here are just a few of the ways we make a difference.

When people are forced to flee in large numbers, the basic necessities of life such as food and water are often hard to come by. In the worst cases, displaced people face malnutrition or even starvation.

The winter of 2018–19 was a desperate time for thousands of displaced Syrians in Lebanon. Storms caused damages to infrastructure, roads and homes across the country, putting at least 70,000 refugees at risk. Many had to evacuate to alternative locations when their tents collapsed because of the flooding.

In March 2019, NRC supported the preparation of over 1,500 meals for 300 refugee families in the east of the country, most of whom had been evacuated from their homes after the storms. Khitam, 54, was one of seven Syrian women who helped to cook the meals. A refugee herself, she had fled to Lebanon with her family six years earlier.

“Knowing I contribute to put food on the table and feed the children of other refugee families makes it worth the effort I put into my cooking,” she says.

Ensuring a healthy supply of food

During conflicts, disasters and displacement, food production systems and markets face potential collapse. People lose their assets and their ability to earn a living is disrupted.

For years, displaced farmers from north-east Nigeria were unable to produce their own food and depended solely on irregular and insufficient humanitarian aid for survival. Even after they returned home, the lack of seeds and tools meant they were unable to farm.

In 2018, we provided training, seeds and farming materials to more than 2,000 returnee households in the Kwajaffa, Miringa and Damboa areas of Borno State, north-east Nigeria. The project is going well and maize harvests have so far been bountiful. As a result, 83-year-old farmer Ibrahim Yapatum and his family have a new-found independence and renewed hope for the future.

“With the seeds, fertilisers and training from NRC, I harvested a lot more maize from my farm than I ever thought was possible,” he explains. “I used to harvest about ten bags of maize – this year, I harvested 50 bags!”

When families are reliant on a single source of income, they become vulnerable. Traditional industries such as farming and fishing are particularly at risk from external factors such as conflict, drought and pollution.

In Somalia the security situation is still unstable after years of conflict. Then, in 2017 the country was hit by its worst drought in 20 years – a disaster from which it is still recovering. As a result, millions of people have been displaced. Often, their livelihoods have been destroyed and they find themselves dependent on humanitarian assistance for survival.

To help families deal with shocks and stresses more effectively, NRC is participating in a support programme called Building Resilient Communities in Somalia. Part of this programme is an “income generation” initiative, whereby women receive training and funding to help them diversify their businesses. Fadumo Sharif, 29, used to struggle to feed her family on the money she earned from collecting firewood, but now runs a thriving shop.

“I decided to invest in a new business that would be more profitable than wood collection,” she explains. “I built a kiosk and started a small shop. Things have changed for the better. My children are able to go to school. The food shortage problem is solved and we are able to pay the water bills.”

In 2018 a total of 2.682,755 people benefited from our livelihoods and food security work, spread over 20 countries around the world.

Find out more about our livelihoods and food security work here.

How you can make a difference

Join us in supporting the 70.8 million people displaced by war and persecution worldwide. You can contribute to our work in the following ways:

For alternative ways to donate, or if you’re a US citizen looking to make a 100% tax-deductible donation, please see our make a difference page.