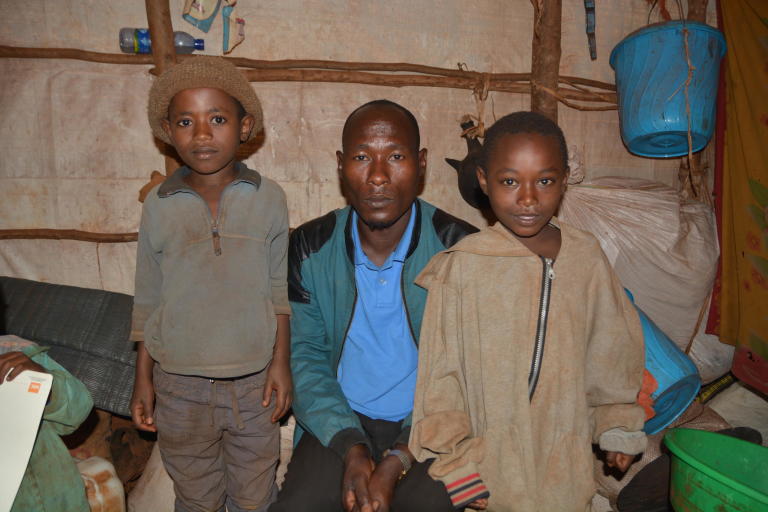 
"There was no one to help us"

Tinbit Amare Published 13. May 2019
Ethiopia Humanitarian access Internal displacement
Read caption Ephrame (left) and Yohanes (right) used be grade 3 and grade 2 students but are currently unable to go to school. Photo: Tinbit Amare/NRC
Ethiopian coffee farmer Abraham Dube lost everything when ethnic violence broke out in his home town and he was forced to flee. Following a government ban on humanitarian aid, he worked as a labourer, supporting his wife and five children on less than USD 1 per day. The Norwegian Refugee Council (NRC) was able to negotiate access to Abraham’s village, providing much-needed emergency support to more than 12,000 people.

“I have been displaced twice,” says Abraham Dube, a 34-year-old farmer from Ethiopia. “The first time was in April 2018, when a conflict began in our village and a group of youths destroyed the roof of my house. After a few months, the government told us to go back home but when we returned, everything we owned was destroyed. The security was still fragile, so I fled again.”

A six-hour walk to safety

Abraham, an ethnic Gedeo, was born and raised in West Guji, in the west of the country. Before the conflict, he and his wife owned a coffee shop. They also cultivated coffee, false banana and maize. “We were living a good life. I was earning more than 10,000 Birr (USD 357) a year. Now we have lost everything,” he explains.

Fighting between communities in the West Guji and Gedeo zones of Ethiopia forced one million people from their homes in 2018. The exact causes remain unclear, but it is thought that disputes over borders and the allocation of pasture and water resources contributed to the sudden escalation of violence.

To escape the conflict, Abraham was forced to walk for six hours with his wife and five children. They currently live in a site for displaced people called “Spring Site”, along with almost 4,000 others.

When Abraham first arrived at the village of Gotiti in the Gedeo zone in April 2018, he was frustrated because he did not have a place to stay. While fleeing, he was robbed of his phone and all the money he had saved. “We constructed a temporary shelter to spend the night, but it was cold and fragile. There was one organisation providing us with food. After four months the government authorities told me to go back to where I came from,” he explains.

However, when Abraham and his family returned to their own village everything had been demolished, including their shop, farm and house. “Even if the government said it was safe for us to return home, things were still tense. Our village was vandalised and houses were burnt,” he explains. For this reason, they decided to flee again.

“
We don’t want to stay like this, depending on aid. We want to work.
Abraham Dube

Life for Abraham and others forced to flee within the region then became worse, when they were denied humanitarian assistance. “After I returned to Gotiti, there was no one to help us. I started looking for a job to feed my family. I found a daily labourer job in one of the farmlands where I was earning 15 Birr (less than USD 1) per day,” says Abraham. “I have seen a lot of people starve to death because they couldn’t find anything to eat.”

NRC had been working in the Gedeo zone since the beginning of the conflict in 2018, distributing non-food items, but access to some areas were blocked. Gotiti village, where Abraham lives, was one of the areas where access was difficult, since the authorities did not recognise the residents as eligible for humanitarian aid.

“We began an advocacy campaign,” explains Nuha Al-Saeedi, Area Manager for NRC’s Bule Hora field office in Ethiopia. “Our team held discussions with the district administration and Disaster Risk Management Office to gain access to these sites. Once NRC got the green light from the government administration we started by registering displaced people in Gotiti village.”

NRC was the first organisation to respond to the situation in Gotiti after the ban was lifted, providing emergency shelter kits and water sanitation and hygiene equipment. We have reached almost all of the displaced people in the area – 12,800 individuals in total – helped by funding from European Civil Protection and Humanitarian Aid Operations (ECHO), Medecins Sans Frontieres and private donors.

Dreaming of peace, stability and a future for his children

After a blockage lasting more than six months, Abraham was finally able to receive relief items including blankets, plastic sheeting, soap, jerricans and cooking utensils. “NRC was the first organisation to help us. Then we started to receive assistance from other organisations as well,” he says.

Abraham hopes and prays things will go back to normal. He wants the government to fix the security situation, so he can go back home. “We don’t want to stay like this, depending on aid. We want to work,” he explains.

Abraham’s two boys Ephrame, 11, and Yohanes, 9, used to be grade 3 and 2 students. “It has been a year since they stopped their education,” he says. “We have been going back and forth, so they could not attend school. Still, I don’t have money to buy them the basic materials. I hope peace will be restored soon and we return home. My kids are good students, they love school, so they should go back to school.”

Read more about our work in Kenya here.