Responding to crisis in West Uganda

Nashon Tado|Published 07. May 2018
Uganda Camp management Protection Shelter and settlements
The Norwegian Refugee Council (NRC) has expanded efforts in response to the refugee crisis in west Uganda. Along with other aid agencies, we are tending to the enormous humanitarian needs in overcrowded sites.

According to the latest data from the UN refugee agency (UNHCR), 76,970 people have arrived in Uganda from the Democratic Republic of the Congo since 1 January 2018. This brings the total number of Congolese refugees in Uganda to 276,570.

This year, between 17 and 23 April alone, 1,721 Congolese refugees entered Uganda from various parts of their home country. Many of those arriving in west Uganda have reported deadly violence between ethnic communities in DR Congo. Attacks on civilian populations have increased, including killings and destruction of property. Refugees have reported instances of rape, abduction and forced recruitment.

"We are in the middle of the crisis and we are doing our best to save lives and protect the most vulnerable. As things stand, no one knows how many people will show up tomorrow. Each day brings new challenges," says Dominika Arseniuk, NRC’s Head of Programme in Uganda.

A cholera outbreak in the western districts of Hoima and Kyengewa has affected 2,246 people with 45 deaths reported since mid-February. In the Kyangwali refugee settlement, a total of 2,115 cholera cases, including 44 deaths, have been reported since the outbreak on 20 February this year.

Since Uganda’s ministry of health officially declared a cholera outbreak in the refugee settlements of Hoima and Kyegegwa districts three days after the outbreak, the number of cholera cases and deaths has decreased. The declaration helped to prioritise hygiene and sanitation among agencies responding with awareness campaigns, disinfection and water treatment.

Responding to the emergency

Twenty-eight national and international non-governmental agencies, including our own team, are now responding to the crisis together.

We have constructed 200 communal latrines and 200 bathing shelters at Kyangwali refugee settlement. The emergency response team installed two water tanks to supply clean water to the refugees in the settlement.

We have trained 10 additional hygiene promoters, and 40 sanitation committees are currently managing sanitary facilities and reporting to technical committees on a daily basis. Hygiene mobilisers are distributing aqua tabs in the settlement, helping refugees to disinfect drinking water and minimise the risks of cholera.

With the cold nights, rainy periods and dry climate during the day, the refugees desperately need shelter. We are constructing temporary shelters for people with specific needs. The shelters are made out of wooden poles and plastic sheeting.

"The humanitarian needs are enormous. We need more resources to come in," says Arseniuk in Uganda.

Ongoing emergency response is being supported through emergency funding by Swedish government.

Cholera puts the lives of Congolese refugees at risk: https://www.nrc.no/news/2018/march/cholera-puts-the-lives-of-congolese-refugees-at-risk/

A story of a family reunion: https://www.nrc.no/news/2018/march/a-story-of-a-family-reunion/ 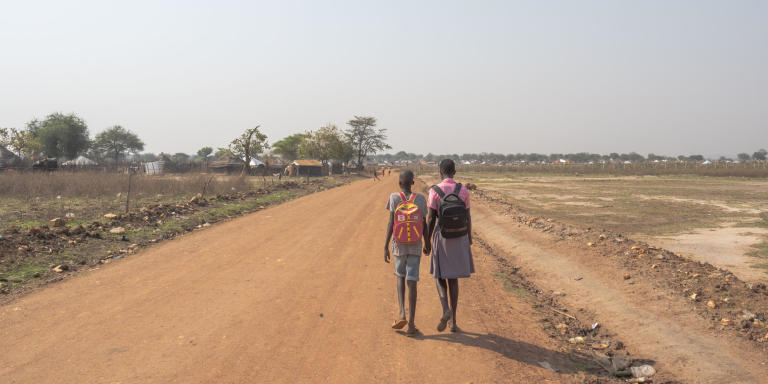