A mother’s spirit of determination

Emebet Abdissa|Published 15. Aug 2017
Ethiopia Cash and voucher
Weyni is one of Ethiopia’s urban refugees in Addis Ababa capital. She is receiving cash grants under the urban livelihood project. Fondly nicknamed Adey or “mother” in Tigrigna language, she is among 16,105 Eritrean refugees surviving under the out-of-camp policy.

She does not know her exact age but she remembers that she was forced into marriage when she was only 16 years old. She was only 18 when she had her first-born son. Seven years ago, Adey Weyni left Eritrea and came to Ethiopia to join her husband who was a truck driver. She passed through Dibarwa to Asmara and Teseney, eventually entering Ethiopia via Metema town.

She paid 50,000 Nakfa, an equivalent of 3,000 US Dollars, for herself and her son to be smuggled into Ethiopia. After a while, they were transferred by security agencies to Gondar city and onward to Endabaguna refugee reception centre in the Tigray. Sadly, her husband died after a few months and was buried in Harari region.

Her biggest fear is that she may never set her eyes on her daughter Nigisti and son Tesfaye, both deployed on mandatory military service back in Eritrea. One of her sons has recently died back in Eritrea due to a heart illness. Her other son Michaele, being a refugee himself, lives in a small house in Addis Ababa with his wife and children.

Weyni has no intention of going back home, fearing that she could be sent to jail for having left the country illegally. Without sufficient income to rent a house, she spends her nights sleeping in churches. She looks at the ground and her eyes are full of tear when she talks about her children.

I pray to God to protect and guide my children wherever they are because that is the only thing that I can do.
ADEY WEYNI, refugee from Eritrea

“My children are scattered everywhere. Not having my children close to me breaks my heart; not seeing them every day and taking care of them is unbearable. I pray to God to protect and guide my children wherever they are because that is the only thing that I can do,” she says.

Weyni is one of Ethiopia’s urban refugees receiving cash grants under the urban livelihood project. She obtains a monthly cash allocation of 1000 Ethiopian Birr (about 43 US Dollars). This is due to her vulnerable status as a refugee with no reliable income. “One thousand Ethiopian Birr might seem a small amount of money to live on for a month, but you only know how much it is worth when you don’t have any other income. A day without food feels longer than an ordinary month,” she says.

Weyni spends her money ensuring that her son, Abel is well educated. Abel attends a college located in the eastern part of Ethiopia. “I send over half of my income to help my son to buy clothes, learning materials for college, food and other basic survival necessities,” she says.

She is a constant visitor to the Opportunities Industrialization Resource Centre, where young Eritrean refugees are provided with vocational training. She started making coffee and tea for the students a year ago. Sometimes she cooks food. However, she earns very little compared to the distance she has to travel to the centre or the time and energy she puts into making the food but she believes in working hard to change her living situation.

A few months ago, she surprised trainers at the centre when she asked to admitted to the hair dressing class. The centre administrators agreed to enrol her because of her ambitious attitude and positive spirit. This bold step has now paid off. She has graduated and is proud of her achievements at her relatively old age.

“I will never give up. With God’s help, I will endure the challenges ahead. My dream is that better days will come to me, to my children and to all refugees,” she says. She is happy because she has secured a place for her younger son at a college in Wollo.  She wants to see her family united under one roof. She longs to be able to provide for the young ones. She wishes to visit her husband’s grave in Harari together with the rest of her children.

I will never give up. With God’s help, I will endure the challenges ahead. My dream is that better days will come to me, to my children and to all refugees.
ADEY WEYNI, refugee from Eritrea

Dreaming of USA and Europe

Her dream is to go to the United States or Europe, where she can work and make a better life.  Until then, she hopes that her coffee business can continue to grow. She prays that the trainees in the opportunities industrialization centre will have enough income to continue buying her coffee and tea. She wishes the compound to be very active, with the library, cafeteria and the playground, so that people will come in big number and keep her busy.

At the moment, only Eritreans can benefit from Ethiopia government’s out-of-camp policy. Eritrean refugees in the different camps apply and obtain an out-of-camp permit, and move to the capital. However, many of them find out that urban life is harder than they imagined.

Eritreans are the third largest refugee population in Ethiopia (165,252 persons) following refugees from South Sudan (328,145) and Somalia (245,949). According to UNHCR, 19,970 urban refugees reside in Addis Ababa, comprising different nationalities. More than 12,000 Eritrean refugees are registered as out-of-camp persons of concern.

The cash support project is one of NRC’s forward-looking initiatives that is tailored to respond to needs of displaced and vulnerable communities in urban dwellings.

It enables the women, men, youth and children to re-connect with their own capacities to sustain themselves while building social and economic potential.

The project’s primary target include people with irregular remittances, pregnant and lactating mothers, the elderly, refugees who are chronically ill, female-headed households with children of less than five years old and households with mentally-challenged children. 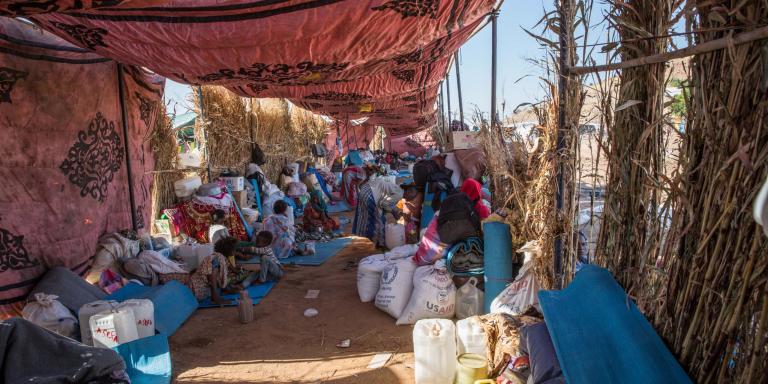