The struggle for peace

NRC South Sudan|Published 12. Feb 2016
South Sudan Internal displacement War and conflict
If the security situation does not improve soon, we will miss our opportunity to move supplies and effectively prepare for the overwhelming humanitarian needs before rainy season arrives, writes Melody Knight, NRC's Conflict and Policy Analyst in South Sudan.

Two years after the conflict began, tensions are high and violence continues in the war-ravaged country.

Since the conflict began in December 2013, the majority of the violence in South Sudan’s civil war has taken place in the Greater Upper Nile region, the northeast part of the country. Continuing tensions and fracturing between the main parties, increasing economic decline, failed peace attempts, and rising food insecurity, among other reasons, has sparked violence in 2015 and 2016 in parts of the country not previously directly affected by fighting. The spread of conflict and the rise in prominence of armed groups is particularly critical in the Equatorian region, in the southern part of the country.

Thousands on the run

One such incidence of violence occurred in mid-January in and around Yambio town, when the government’s Sudan People’s Liberation Army (SPLMA) clashed with a local armed group, often referred to as Arrow Boys. The Arrow Boys were originally set up in the 2000s as a community defence force in the fight against the Lord’s Resistance Army (LRA), a violent group engaged in illicit economies, originally based in Uganda, but also active in Democratic Republic of Congo and other areas in the region.

As fighters clashed south of town and moved their way into Yambio, an estimated 5,000 civilians took refuge in an compound for an international non-governmental organization (INGO), largely due to the protection provided by the United Nations Mission in South Sudan (UNMISS), located next to the compound.

Civilians fled into the INGO compound for reasons of protection and physical security. Twenty-five year old Margaret Jokudu and her five children entered the compound after the fighting began. “We cannot be able to go sleep at home because security is not at all fine,” said Jokudu, adding that she had not left the site since entering four days prior.

Mostly women and children populate the site during the day, as men venture home to collect food and household items before returning to the compound for protection at night. “Others have gone to the bush, to Nzara, a nearby town, or even crossed into Congo,” said Jokudu. The displaced population in the compound expressed concern at the violence during a time when peace implementation is ongoing in Juba, South Sudan’s capital. One man seeking protection inside the site stated, “if the peace signed in Addis is not implemented, there will be no safety”.

The situation in Yambio is a tragic example of insecurity that continues regardless of the signature of the Agreement on the Resolution of the Conflict in the Republic of South Sudan in August 2015. Despite an agreed-to immediate cease-fire and months of negotiations between the parties to the conflict with support from civil society groups and international actors, the conflict continues.

Insecurity has spread into new areas previously not directly affected by violence, in some cases driving people into Democratic Republic of Congo and Uganda. In early January, UNHCR reported that Uganda was receiving 500 new arrivals a day. Including other neighboring countries, primarily Sudan, Ethiopia and Kenya, this new displacement brings the total population of South Sudanese refugees in the region to over 650,000, many of whom left home two years ago.

The violence in the Equatorian region is not only alarming because it serves as a trigger for displacement; it also hampers the movement of humanitarian goods through the area. Aid workers in South Sudan rely on the dry season to transport significant supplies on roads that are inaccessible during the heavy rains that begin around May. Insecurity along the road in the Equatorian region has slowed the transport of life-saving humanitarian goods needs en route to Greater Upper Nile, a part of the country hardest hit by violence and destruction over the past two years.

An estimated 1.66 million South Sudanese remain displaced within the country, according to the UN Office for the Coordination of Humanitarian Affairs in South Sudan. An estimated 200,000 of the displaced are sheltering inside the bases of the United Nations Mission in South Sudan (UNMISS) in areas referred to as Protection of Civilians sites.

Continuing insecurity in areas around the country makes it difficult for people to return home safely. Many have been displaced from their homes since the conflict began over two years ago. Humanitarians must work closely with UNMISS and the forthcoming Transitional Government of National Unity to support safe passage and durable solutions for displaced communities.

The Government of South Sudan, the SPLM-IO, and the other signatories to the Agreement on the Resolution of the Conflict in the Republic of South Sudan should work quickly to implement the peace agreement to ensure that the rights of the conflict-affected population in South Sudan are respected and that the most vulnerable have access to protection and assistance.

The longer the implementation takes, the harder it will be for displaced South Sudanese to safely return home and recommence their livelihoods. Dry season has just begun, and with it the easing of physical mobility in a country that is swampy and difficult to travel through in rainy season.

Until the peace agreement is fully implemented, the potential for violent conflict will continue to be high. Parties to the conflict must negotiate political agreements fast to improve the security situation across the country and prevent situations of new displacement – such as that in Yambio town. 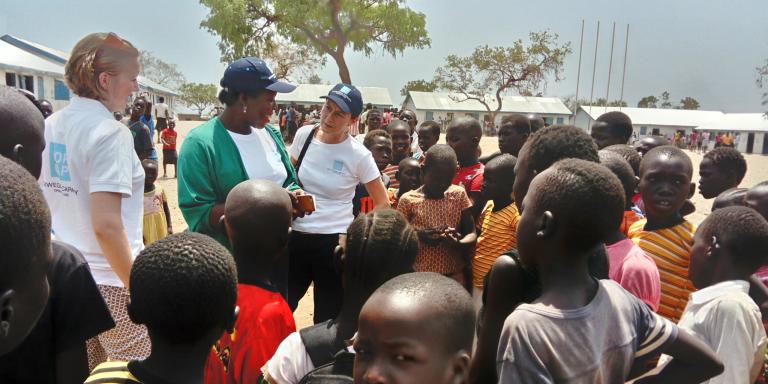 “We must work to make people less dependent on food aid and more self-sufficient”, says Helen Kape Peters in NORCAP. Helen, who herself has experienced food insecurity as a refugee, believes this is one of the most important issues facing Nobel Peace Prize winner World Food Programme (WFP), and partners such as NORCAP, in the coming years. 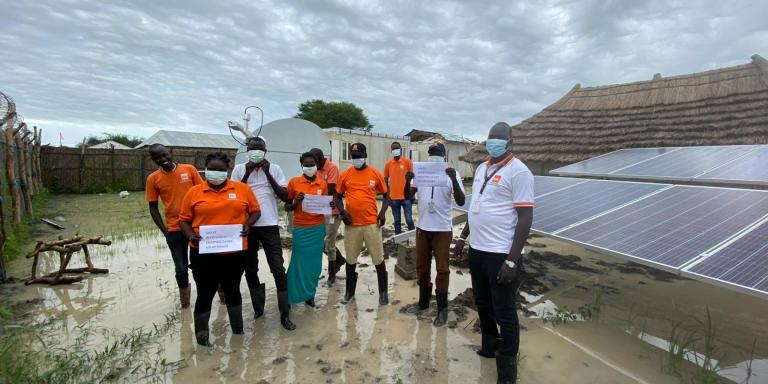 Greening humanitarian operations – one solar panel at the time

NRC South Sudan is replacing their old diesel generators with renewable energy assisted by NORCAP. They encourage the humanitarian sector to follow their example.