Too much of a good thing? Observers both impressed and concerned by amount of trust in Norwegian elections

Anna Cahill|Published 17. Sep 2019
Norway Elections NORCAP NORDEM Democracy Election observation
Election practitioners from five countries were impressed with the professionalism, transparency and trust in Norwegian local elections, but warn that too much trust can be risky.

Despite the grey skies and light rain, a typical autumn forecast in Norway, election campaigning is in full swing on Oslo’s Karl Johans Gate. The wide cobblestone street is lined with tents, strolling city constituents and politicians. Among them is Norway’s Prime Minister, Erna Solberg.

In front of the blue Conservative Party tent, Solberg greets a group of internationals who’ve crowded around her. They introduce themselves as delegates to this year’s NORDEM Election Study Programme. Today, they are tasked with observing the election campaign.

At each party’s tent, delegates look at the pamphlets and giveaways being handed out by smiling canvassers.

The left-wing Labour Party is handing out red roses, while the Conservative Party is offering miniature sunscreen bottles that read ‘avoid turning red this summer’ – a play on the political colours.

“What impresses me the most is that the campaigning can happen in such a calm, casual environment. There’s no shouting or yelling,” says Ismail Yasin Mohamed, Director of Operations at the Somali National Independent Electoral Commission. “In Somalia, elections really divide us.”

Ismail is here, along with 12 other election practitioners from around the world, to participate in NORDEM’s Study Programme to the Norwegian Local Elections.

In the study programme, delegates from countries in political transition are invited to a one-week course on international standards for both democratic elections and election observation. Participants are selected in collaboration with the Norwegian Ministry of Foreign Affairs, which finances the programme, and international embassies. Throughout the week, they learn about the Norwegian electoral system and political culture by attending thematic lectures and observing campaign activities, voting and ballot counting in different Oslo polling stations. These experiences culminate on the final day when delegates assess and offer recommendations for the Norwegian electoral process according to recognised democratic standards.

NORDEM has invited international delegates to every Norwegian election since its establishment in 1993. Delegates participating in this year’s edition reign from Bosnia and Herzegovina, Somalia, Ghana, Ukraine and Myanmar and are all either Members of Parliament or members of the electoral commission in their countries.

By the end of the study programme, they will be accredited as official election observers.

NORDEM, the Norwegian Resource Bank for Democracy and Human Rights and NORCAP’s civilian capacity provider, is seasoned in election observation and more than qualified to offer the training.

“Every year, NORDEM sends 60-80 observers to approximately 20 elections around the world on missions run by international and regional organisations,” says Benedicte Giæver, executive director of NORCAP. “The observers contribute with an independent assessment and constructive recommendations on how to improve the electoral system.”

Delegates spend their first two days attending lectures held by relevant stakeholders on topics such as the role of the media, the representation of women and ethnic minorities and the mobilisation of young voters. Among the lecturers are officials from the Norwegian Broadcasting Cooperation (NRK), prominent researchers and the Norwegian Ministry of Local Government and Modernisation.

“The biggest issue that we can learn from Norway is how democracy has been established and how comfortable people here are in the democratic system,” says Mohamed. “[In Somalia], we are now starting with this type of election from scratch.”

Exchange forums are also scheduled into the week’s agenda to encourage country delegations, each at different stages of the democratisation process, to gain from each other’s experience.

“The participants are highly qualified and competent stakeholders in their countries’ electoral and political systems. One aim of the study programme, then, is for the participants to share experiences, address common challenges and perhaps form a network of practitioners that they can benefit from when they are back in their home countries,” NORDEM project manager and subject matter responsible, Anne Sofie Molandsveen, says.

Of course, Norway can learn a lot from the international observers as well.

“There is no such thing as a perfect electoral system. Established democracies can also benefit from a view from the outside. By inviting international election observers, we open ourselves for dialogue and input that may assist us in improving our electoral system,” says Giæver.

On the campaign trail

Election observation for the delegates begins after lectures with the pre-election atmosphere in downtown Oslo.

In Norway, political campaigns are unregulated, meaning there are no restrictions on when or how campaigns are conducted. For many delegates, this comes as a stark contrast to their home country.

“In Myanmar, the day before the election will be a silent day. This means that no campaigning, or anything related to the election campaign is allowed. Furthermore, on election day, campaign activities are not allowed within 500 yards of polling stations,” says Nang Kham Aye while walking past crowds of canvassing volunteers near the Norwegian Parliament building on Saturday. She became a Member of Parliament in Myanmar in 2010 when the country held its first general election in two decades.

Aye was not alone in taking notice of the freedom exercised by Norwegian political campaigners.

Samuel Tettey, Deputy Chairman of Operations for the Electoral Commission in Ghana, explains that political campaigns in his country are highly regulated for security reasons. In order to hold political rallies, parties must inform the police in advance to ensure a violence-free atmosphere.

“Our system is such that there are at times violent clashes during political rallies, so if the rallies are not regulated, it’s possible that another political party may also hold a rally that same day in the city and there would be violent clashes,” he says.

“Here it is not like that, and we see that it is due to the high public trust they [Norwegians] have and that’s what’s actually making the difference between the Norwegian system and when you come to maybe Ghana and other parts of Africa,” concludes Tettey.

Delegates continue to highlight public trust as a key observation on election day. Inside the Oslo City Hall polling station, they observe voters casting their ballots and, in the evening, observe the Electoral Committee count votes.

For several delegates, voters calmly walking in and out of the polling station without security or commotion comes as an indication of confidence in the electoral system.

“You don’t actually notice it’s an election day,” commented Nasiha Pozder, a Member of Parliament of the Federation of Bosnia and Herzegovina.

According to Pozder, Bosnia is the country with the highest number of invalid votes, and counting ballots presents a major challenge that has led to high levels of public suspicion.

“We count votes by hand and it takes 1-2 months. During that process, they [people who count the votes] can cheat, they can do whatever they want,” she said. “Sometimes we find a bag full of ballots after the voting that were just pushed away.”

She believes that implementing early or advanced voting, options that nearly one third of voters used in this year’s Norwegian local election, may help to reduce the volume of votes to count on election day. “We are also thinking about the scanners to count votes electronically. We really need them so we can do it quicker,” adds Pozder.

Finally, on Tuesday, delegates meet with the Norwegian Ministry of Local Government and Modernisation to present their findings and recommendations for the Norwegian electoral process.

A representative member from each country’s delegation stands to address State Secretary Aase Marthe J. Horrigmo. Delegates’ assessments of the election are generally quite positive and agree that it was a fair and competitive election in line with international standards. Several delegates, including those representing Bosnia, Ukraine and Ghana, underscore that the trust, transparency and professionalism of the election were particularly impressive.

Abdirizak Bashir Mohamed, Secretary General of the National Independent Electoral Commission in Somalia, views the long period of advanced voting that takes place in Norway as a unique way to increase voter turn-out.

Olga Zheltova, a member of the Central Election Commission of Ukraine, is also impressed that, despite not having a gender quota ensuring female representation, most parties practise a 50/50 gender division on their lists.

Recommendations for Norway range from practical suggestions regarding the size, design and transportation of ballot boxes and procedures for securing the official ballot stamp, to more fundamental changes to the Norwegian system.

Samuel Tetty, the sole delegate from Ghana, suggests that ballot boxes should be transparent. He also points out that the transportation of ballots from the various polling stations to the Oslo City Hall, where the final counting takes place, is not secured by police as it would be in Ghana.

Additionally, Zheltova suggests that the complaint and appeal system in Norway could benefit from reform. As of today, election related disputes are dealt with by the Ministry of Local Government and Modernisation. She recommends allowing complaints to instead be dealt with by an independent body.

Several delegations stress that while high levels of trust and transparency are commendable, they also increase vulnerability.

Irena Hadžiabdić, Commissioner of the Central Election Commission in Bosnia and Herzegovina, speaks on behalf of her country’s delegation. She expresses concern that allowing citizens, including election observers and media, into the polling station without verification of identity could compromise security. She also suggests restricting campaign activities on election day.

Similarly, Aung Soe Win, a member of the Union Election Commission who speaks for the Myanmar delegation, applauds the trust and freedom exercised by stakeholders and citizens in Norway, but warns that too much trust is risky.

The Myanmar delegation also raises the campaigning of the Prime Minister on Saturday for the Conservative Party as a possible conflict of interest.

Once presentations conclude, Horrigmo thanks the delegates and assures that their findings will form the basis for future discussions in her ministry. She also notes that recommendations from past election observers have brought about improvements to Norwegian electoral practices.

In addition to providing recommendations, an important aspect of this stage of the programme is for delegates to see how Norway experiences being observed and responds to international observers’ recommendations. Each country sending a delegate to the study programme has agreed to be open to receiving election observers in the future, and Norway aims to showcase that transparency and self-criticism are vital to a healthy democracy. 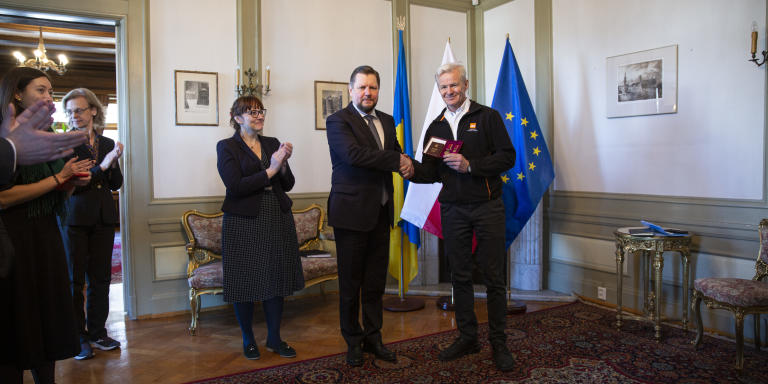 NRC receives Ukrainian order of merit for services in Ukraine

Congratulations to Norway on its election to the UN Security Council 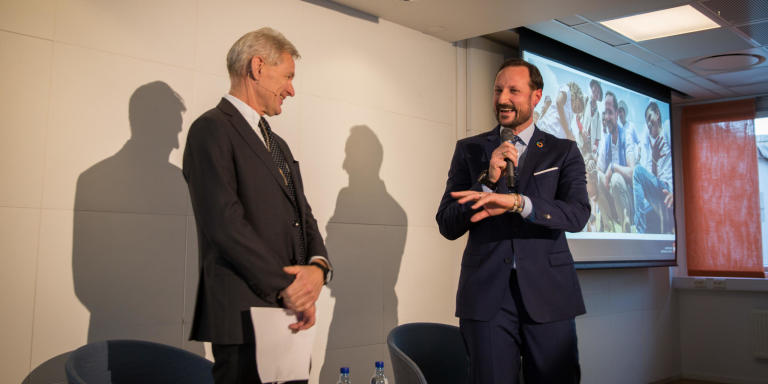 A royal visit from Crown Prince Haakon of Norway