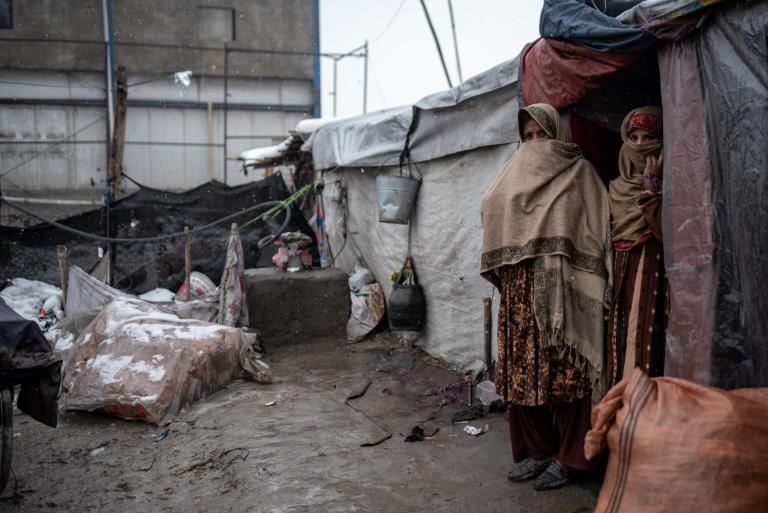 
Families without help are freezing to death

Roald Høvring Published 25. Jan 2023
Afghanistan
Read caption KABUL. Qamar Gul, 40 (left), lives with her two children in one of Kabul's many informal settlements. She is a widow and has a 13-year-old daughter (right) and a son aged 15. Qamar Gul works as a housekeeper in the neighbourhood, and her son collects plastic in the streets for recycling. Qamar Gul used to earn 100 AFN per day (1 USD) before the Taliban takeover, but now she makes as little as 30-40 AFN. This photo was taken in January 2022. Photo: Christian Jepsen/NRC
Our female colleagues who are affected by the Taliban’s ban on women NGO workers are deeply distressed – they can no longer provide life-saving aid to vulnerable families during the freezing winter.

“Without female aid workers, we are unable to reach these families with life-saving help,” says Gulnoor. She is one of our 469 female colleagues in Afghanistan who is now banned from doing her job. “In parts of our society, the extent to which male aid workers can have contact with these families is limited.”

For security reasons, we do not use her real name. Now she is isolated in her family's apartment in Kabul and does not dare to move outside the four walls of the house.

Afghanistan is currently facing extreme cold. The government in the country have confirmed that more than 120 people have lost their lives due to the cold weather. In the coldest areas, temperatures have been measured as low as minus 33 degrees, and with up to 30 centimeters of snow in the mountainous regions.

On 24 December 2022, the Taliban introduced a ban on female employees of international aid organisations. The Norwegian Refugee Council (NRC) and many other organisations were forced to stop work all over Afghanistan. This ban has had a particularly devastating consequences for families consisting of widows with children and single mothers. About a third of our employees in Afghanistan are women. NRC is in ongoing dialogue with the authorities in the country to have the ban on female aid workers lifted. We also work to ensure that girls can continue their education after the sixth grade and have the opportunity for further education.

NRC was in the process of completing a major winter aid programme when the ban put an end to our work. More than 3,700 families had already received financial assistance to obtain firewood, blankets, warm clothes and other life necessities, so that they could get through the winter. But in the internally displaced sites of Kabul, 2,500 very vulnerable families were still waiting for help.

Weekly, our colleagues in Kabul receive messages of concern from despairing community leaders who ask when we will resume aid work.

“It is both depressing and frustrating to know that if the Taliban had let us work, we could have helped these people. The news reports about families and children freezing to death are heart-breaking, and I fear for the lives and health of the many who are now not getting help,” says Gulnoor.

Forced to beg on the street

Before the ban, two out of three Afghans were already dependent on humanitarian aid to survive, with 20 million facing potentially life-threatening levels of food security.

Unemployment is high, and displaced families struggle extra hard to find paid work. For widows and single female parents this has become an impossible task. At the same time, the Taliban has introduced a ban on begging.

“Despite strict movement restrictions and a ban on begging, many women and children will be forced into the streets to beg,” says Gulnoor. “It is also not an unusual sight on the streets of Kabul to see children collecting plastic and cardboard which they sell to provide food for their families. These are children who should actually be at school.”

Asal is another of our female colleagues. This is not her real name. She too now spends her days within the four walls of her home. She is both frustrated and despairing that she cannot help the many families who are now facing increased suffering and are at risk of dying from disease, malnutrition and the cold.

“It has now been many weeks since I visited some of the most vulnerable families in Kabul's informal settlements. When I was last there, I met, among others, a widow, who lived with her three daughters. The husband had been killed in a bomb explosion five years earlier. There were no men who could represent or provide for this family, which is completely dependent on help from outside to survive,” says Asal, who wonders how this, and similar families will now get help.

Leaving newborns in the delivery room

According to Asal, in such a desperate situation, families will resort to various survival strategies.

“Begging on the street can be an emergency solution. And although [this widow] is a good mother who wants her daughters to get both an education and a good job, she may be forced to marry one of them off to enable both this daughter and the rest of the family to survive.”

Gulnoor says that some desperate women leave their newborns at the hospital soon after they give birth.

“After being pregnant for nine months and giving birth to a healthy child, the mothers are forced to make such a heartbreaking decision. But the family is without income. They are starving. They lack money for medicine. And they see no future for their children. Fewer mouths to feed therefore becomes part of the family's survival strategy,” says Gulnoor.

Our female colleagues are frustrated, despairing and angry after the authorities introduced the ban.

“We are of course sorry because we are no longer able to help all those who suffer,” says Gulnoor. “But the ban robs us women of basic rights. Denying us, more than half the population, to participate in society just because we are women is a cruel act. We have studied and acquired a profession, so it is extra bitter to be told that for the future you must stay at home.”

In the past, the Taliban have prohibited girls from continuing their education beyond the sixth grade.

“I also fear for my daughter's future,” says Gulnoor. “She is in the fourth grade now, but what should I say to her when she asks about education beyond the sixth grade. When she shares her future dreams with me?”

NRC started its operations in Afghanistan in 2003. Since 15 August 2021, NRC assisted over 870,000 people affected by displacement across 18 provinces in Afghanistan with support ranging from emergency responses to floods, earthquakes and drought, education, shelter, legal assistance, protection, livelihoods, food security and water and sanitation assistance. During autumn, we delivered assistance to 3,700 families (25,900 individuals) to help them prepare for winter. These lifesaving winterisation activities are now on hold.