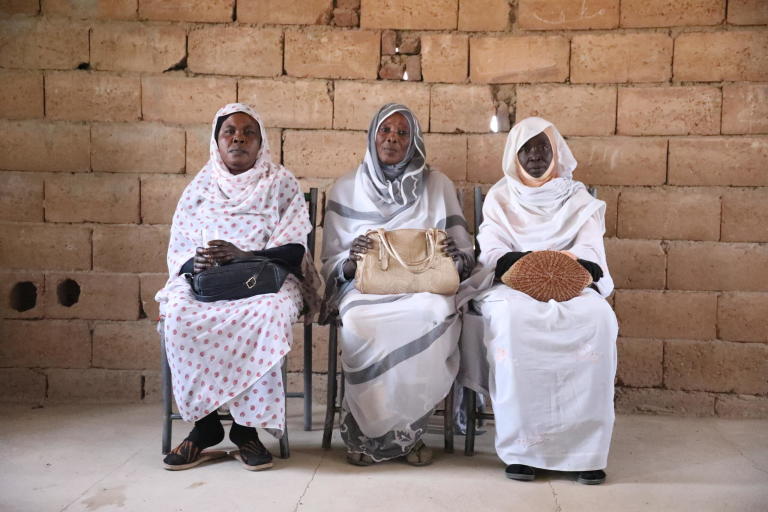 By Rawan Kara Published 18. May 2022
Sudan Education
Read caption Manal (left) with two other members of the PTA. Photo: Rawan Kara/NRC
An inspiring group of women in Sudan’s While Nile are making sure their children get an education by building one classroom at a time.

“The school was very different to what it is now. There was just one school for both boys and girls and it was built from local material like hay and mud,” says Manal. She is a teacher at Jwairya School for Girls in Sudan’s While Nile state and is a member of the community’s Parent Teacher Association (PTA).

“Every year, the school administration would collect donations to build one more classroom. After building five classrooms, the Ministry of Education demanded we only build classrooms from permanent building material. The locality of Rabak could not afford it, and the school was shut down for a few years,” Manal remembers.

“It stood empty for years. People had given up to the point that they would take the material of the abandoned building and use it for their homes. Children had to walk long distances to get to the schools outside of this area.”

A few years later, parents of the area realised their children were suffering from walking long distances to get to schools. Children were more motivated to find jobs than to walk the distance to school.

The PTA decided to take matters into their own hands and started gathering donations again from families in the area for renovations. Since the funds were limited, people would volunteer to do the construction work. One year at a time, the community built one classroom after the other. And when the school reached eight classrooms, the PTA decided to separate it into two different schools, one for girls and one for boys.

Like most schools in White Nile, Jwairya School serves an area heavily affected by displacement. Families come to the area seeking shelter from conflict and flooding in South Sudan and the tribal conflicts in Darfur. According to UNHCR, White Nile hosts the second largest number of refugees in Sudan after Khartoum. In addition, thousands of Sudanese people were forced to flee their homes in 2020 and 2021 due to major flooding.

Jwiarya School currently has 600 students, many of them are refugees or internally displaced.

Over the past two years, the education system in Sudan has been hit by multiple crises. Several waves of Covid-19 forced schools to close for months at a time, floods heavily damaged infrastructure, while the spiraling economic crisis left insufficient resources to pay teachers' salaries or rehabilitate schools. These threatened children’s education and future, as they contributed to deteriorating the quality of their education.

With the help of the European Union, NRC is helping schools in areas affected by displacement in White Nile. Under the Better Learning Programme, NRC has provided 108 PTA members and 140 teachers with training for improving schools, hygiene practices, and providing emotional support for the children.

The training introduced PTAs in different areas of White Nile to methods and plans to improve schools and provide a better learning experience. We also trained teachers to turn schools into a safe sanctuary for the children to raise morale and motivation.

“NRC gave us very useful training. They helped us realise we’re dealing with children from diverse backgrounds. Some of our students came here fleeing the war in South Sudan or even in Darfur,” says Manal.

“Some even live in dire circumstances and have to work after school to support their families. We now try to find ways to make school less stressful and more amusing for them,” she adds.

The PTA of Jwairya school consists of 20 members. The women in the community are highly active in the betterment of their community. Fifteen members of the association are women, and five are men. But this active role comes with its price for the women.

“We have had to face many obstacles in our community while doing this work. People are saying we’re neglecting our children and home duties,” says Aziza, PTA member and mother of a child enrolled in Juwairya School.

Aziza tearfully adds, “The training from NRC gave us huge motivation. It made everything we do worth the struggle. The training helped us plan and motivated us to start construction early.”

After receiving the training organised by NRC, the PTA was motivated to start this year’s construction ahead of receiving funds. And despite the heat and the other obligations they have, the men and women of the community volunteered, like every year, and started stacking bricks and plastering new classrooms.

“I find motivation in the commitment the other women show for this work. Our children are proud of us and are happy for how far their school has come,” Aziza concludes.