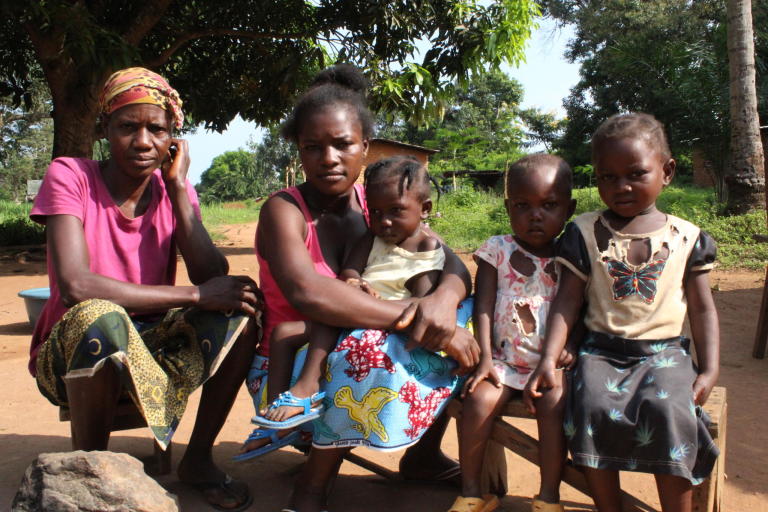 
The generosity of a stranger

Chanel Igara Published 25. Jan 2022
Central African Republic Donors and partners
Read caption Gisèle (left), with Hortense and her three children. Photo: Chanel Igara/NRC
In a world becoming increasingly hostile to displaced people, we can find hope in the selfless acts of some individuals. Individuals like Gisèle.

In the Central African Republic (CAR), violent attacks that force people to flee their villages and towns are unfortunately all too common. Oftentimes, when displaced people arrive in new towns and cities, they are welcomed by strangers who allow the new arrivals to live in their homes. This gesture of kindness from members of host communities is even more moving given that these hosts are often barely getting by themselves.

Gisèle, 42, is an example of this. She selflessly decided to allow a displaced woman and her children to move into her home.

She knew the pain of being forced to flee one’s home. In 2016, violence forced her to leave CAR and cross the border to the Republic of the Congo. She spent four years in a refugee camp in a town called Betou. At the beginning of 2020, she felt it was safe enough to return home, and with the assistance of the UN Refugee Agency (UNHCR), she returned to the town of M'baïki in CAR where she settled with her husband and six children, the oldest of whom is 22 and the youngest nine.

Today, Gisèle gets by working a small plot of land. But the little that she has is shared with the young woman that Gisèle recently welcomed into her home.

The nightmare of displacement

Hortense, 28, arrived in the town of M’baïki with her three children after fleeing the violence in her hometown in December 2020. She remembers how her nightmare started.

“
I was doing the laundry when I heard gunshots. I knew straight away that I had to take my children and run.
Hortense

“It was morning,” says Hortense. “I was doing the laundry when I heard gunshots. I knew straight away that I had to take my children and run. My husband also ran, but I didn’t see what direction he fled in.”

Hortense and her children walked for two days with a few other villagers towards the town of M’baïki. A moto-taxi driver that they happened upon along the way helped guide them for some of the journey.

After arriving in M'baïki, Hortense found an unfinished house that she and her children moved into.

Her first priority was to contact her husband. Although she didn’t have a phone, she remembered that her husband had his phone on him when he fled. So as soon as she arrived in M'baïki, she asked to borrow a phone and dialed her husband’s number. She breathed a sigh of relief as he answered. He had made it all the way to Berberati, a large and relatively safe town in CAR. But it was too dangerous for him to join her in M’baïki because able-bodied men were often the targets of armed fighters. The couple decided to wait until things were safer before reuniting.

After a week spent living in the unfinished house she had found in M’baïki, Hortense came across a stranger that offered her an unexpected gesture of kindness.

Gisèle walked past the unfinished house and knew what she had to do.

"I am human and when I saw this young girl with children who had no place to live, I felt moved,” Gisèle explains. “You know we are all Central Africans. It is a question of solidarity. I saw the girl with the children sleeping in an unfinished house and I have a spare room in my house. So, I asked her and her children to move in with me. I see her as a daughter and her children as my grandsons.”

“
You know we are all Central Africans. It is a question of solidarity.
Gisèle

Gisèle says that one of the reasons why she was willing to allow Hortense and her children to move in with her was because of her similar experience in 2016. It had not been easy for Gisèle when she had been a refugee in the Republic of Congo.

The two work together to manage daily living. Hortense helps around the house in various ways with different chores. But Gisèle’s generosity was never dependent on this.

"What I eat, they will also eat it,” says Gisèle. “We will manage the little that we have together. There are times in life when we go through difficult times but also times when we are going to live happily."

For Hortense, the gratitude that she feels towards Gisèle is immeasurable. Although she was a stranger, she was made to feel welcome, like family, and that is something that she will never forget.

In a world where all too often migrants and refugees cause host communities to panic and turn inward, Gisèle’s story is not merely a heartwarming story but a powerful reminder of the importance of solidarity, kindness and generosity.

The Norwegian Refugee Council (NRC) is present in M’baïki, CAR, helping both displaced families and members of the host community like Gisèle obtain birth certificates for their children. This assistance was supported by the Norwegian Ministry of Foreign Affairs.