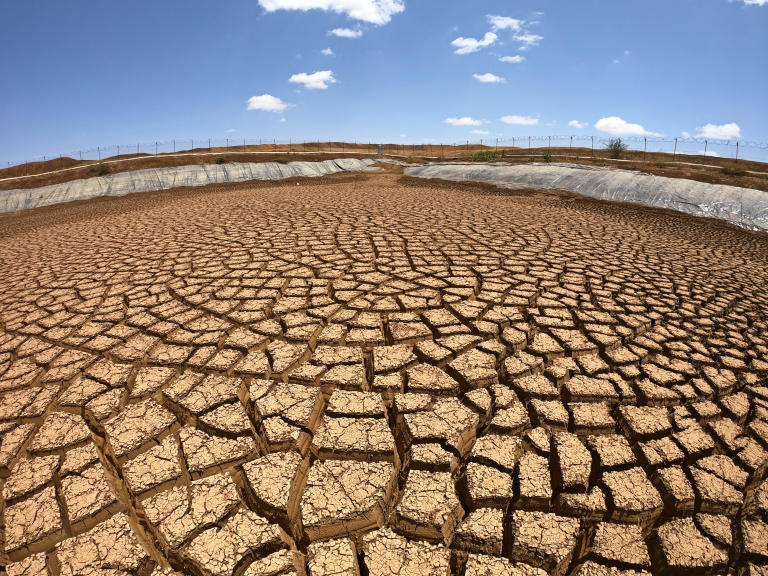 
Snapshots from a drought destroying lives

Will Seal Published 03. Jun 2022
Somalia
Read caption A dried-up earth dam in Bonkai village on the outskirts of Baidoa. With a capacity of 25 million litres, this dam provided water for thousands of people, their crops and animals even during previous dry seasons. Following three failed rainy seasons, and some of the lowest rainfall in Somalia in 40 years, it sits empty, while an estimated 700,000 livestock animals died at the end of last year. Photo: Will Seal/NRC
Across Somalia, the worst drought in decades continues, leaving more than six million people in need of humanitarian aid while facing life-threatening water and food shortages and income loss.

A displacement crisis has been triggered. More than three-quarters of a million people have had no choice but to flee their homes since the start of last year, including more than 525,000 this year. Conditions for those displaced, particularly in urban areas, are extremely poor.

Currently, more than 80,000 people face famine, while food and water insecurity impacts are felt by millions. Water sources have dried up, crops and livestock have died, food prices are climbing, conflicts over water and land are increasing, and disease outbreaks and malnutrition are rising.

In Baidoa, a major town in Somalia’s south approximately 250 km west of the capital, the effects can be seen first-hand. Held by government forces, but largely surrounded by armed group-held areas, Baidoa is one of the major destinations for displaced people fleeing drought.

Traditionally a hub of economic activity and agricultural trade, one of Baidoa’s major imports is now displaced people, adding to a large existing population of people who have previously fled conflict and flooding.

Conditions were already bleak and are worsening as the numbers of people increase, along with demands for water and basic services. Water access has been suspended in many areas, riverbeds, dams and wells have dried up, and people queue hours for water.

The international community is responding but support is far short of needs. Just 17.8 per cent of the funding required to meet Somalia’s total humanitarian requirements in 2022 has been provided.

Habibo is a new arrival in one of Baidoa’s existing 576 IDP camps. She is a drought-displaced mother of nine. Like most, she and her family have almost nothing, and are using branches and cloth scraps to construct a temporary shelter.

“We have no food, no water and no shelter. Before the drought, we had livestock, but all our livestock died. After leaving everything behind we reached this IDP camp," says Habibo.

“We arrived yesterday, the people left behind, they have no chance, it is just a matter of time until they die. Even here we might die because we have nothing.”

Along with much of his village, Hussein, a father of eight, was forced from his village after drought ravaged crops and livestock. Crossing 200 km of countryside held by armed groups, the village’s people arrived in overpopulated displacement camps, adding pressure to already limited services.

Ishabaidoa, the main waterway in Baidoa, is completely dry. Much of the public water supply has been shut off in the town, while dams, shallow boreholes and reservoirs have dried up. Somalia is experiencing an increase in the frequency and intensity of climate-related extreme weather, including severe droughts.

Newly displaced women wait to collect water from a truck. Rains traditionally come April to June, but have largely failed. It's the fourth season in a row and now the longest sequence of poor rains since 1981.

Water sellers queue at one of a number of fully functioning wells. Water is then transported to communities and resold at a higher price – often unaffordable to new arrivals or impoverished people. In parts of the country, the price of a 200-litre water drum has jumped by 300 to 400 per cent in the last 12 months.

People queue at a water distribution point. Rapid construction efforts have been underway to build or expand water points, boreholes and other systems, while providing emergency water supplies to thousands. Unfortunately, demand is greatly exceeding the available resources.

A young mother waits to fill water containers in a displacement camp on the outskirts of the city. Many affected families are going without meals on a regular basis. According to UNICEF, 1.4 million children are likely to suffer from acute malnutrition in Somalia this year due to the ongoing drought, with thousands of children at risk of death.

“The scale of the crisis in Somalia, and the level of human suffering, is truly staggering,” said Mohamed Abdi, the Norwegian Refugee Council’s Somalia Country Director. “To avert a tragedy and save lives, the world must act now – Somalia requires a massive injection of support.”