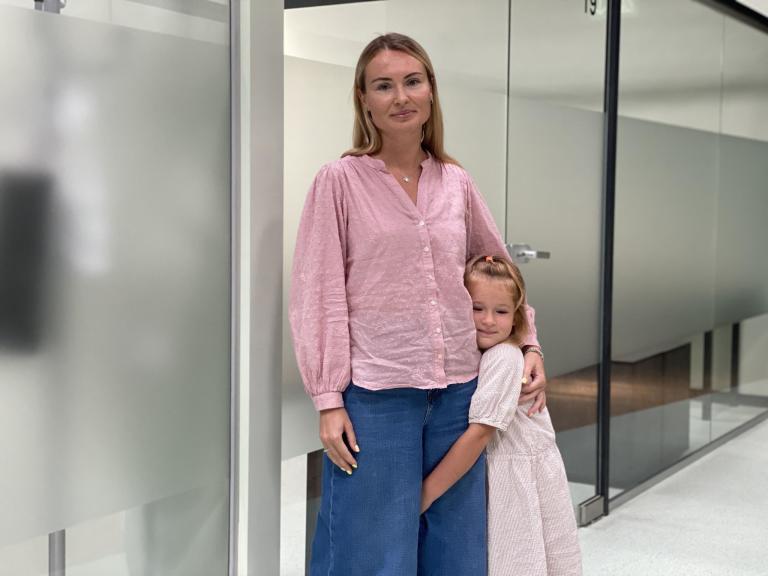 
Returning to loved ones left behind

By Ganna Dudinska Published 08. Sep 2022
Ukraine War and conflict
Read caption Maria and her daughter have now returned to Ukraine after a month and a half living in Spain. Photo: Volodymyr Khorbaladze/NRC
Despite the ongoing fighting and threat of airstrikes across Ukraine, millions of people are now returning home. Here, three women tell us why they decided to head back into their country, despite the uncertainty.

More than half a year on since the escalation of the war in Ukraine, relentless fighting continues in the east and south of the country, and the risk of missile strikes is present across the whole country. Over 12 million border crossings from Ukraine have been recorded since February 24, including nearly two million during the last month alone. There are over seven million Ukrainian refugees displaced across Europe.

People have told us about the heart-breaking choices they were forced to make when fleeing their homes. And now, about the difficult decision to return home despite the uncertainty.

“The first days were full of panic”

Many people still remember in detail the morning they were woken by air raid sirens and missile strikes.

“When we realised that the war had started, we rushed to buy some food and find fuel for the car,” remembers Iryna, a mother of three. “We sheltered sixteen people in our house as it has a decent cellar.” Iryna had been living with her family on the bank of the Dnipro river before 24 February.

These interviews were conducted as part of a survey conducted by the Norwegian Refugee Council (NRC). Read the full report here.

“The first days were full of panic. Helicopters and airplanes were flying right above our heads. However, even after a month living in these circumstances, I did not really want to leave my home. My husband insisted that I should leave to seek safety for our small children.”

Iryna and her children took a long journey through Przemyśl and Wrocław in Poland, and then on to Bristol in the UK, until they found themselves in a village in Wales, as part of a refugee housing programme. Iryna found it challenging adapting to a new place and the rules and lifestyle of her host family.

After two months spent hundreds of kilometres away from her home and husband, she decided to return to Ukraine. Iryna recognises that the situation in Kyiv remains extremely fragile, but she tries to stay optimistic.

“A lot has been done to improve the security situation for people here in Kyiv. It feels safer than it was. Still, I understand that no one is protected from the missiles. We have a strong nation that can adapt to different critical circumstances, and we will gradually recover,” she says.

Twenty-five years ago, Tetyana founded a theatre studio for children in her hometown of Pryluky in Chernihiv region, which was later moved to Kyiv. The morning of 24 February turned her life upside down.

“On the first day I moved from my apartment to another district of the capital to stay with my son and my daughter-in-law,” remembers Tetyana. “We heard explosions all the time and I saw the tanks on the street with my own eyes. Still, I refuse to consider myself a victim.”

Tetyana says she can’t comprehend that such things can happen in the twenty-first century. After several days spent with her family, Tetyana managed to return to her home to rescue her cats and collect some basic things from her own apartment. She still remembers the moment she made the difficult decision to leave Kyiv.

“We constantly heard echoes of the atrocities taking place in Hostomel and Irpin, just a few kilometres from our place. This is when we understood we had to go.”

First, Tetyana fled to a village in the Vinnytsia region where she was hosted by some relatives. They were also sheltering nine other people. She registered as an internally displaced person and spent almost one month there, helping her fellow citizens. Tetyana’s second son, who is living in Kazakhstan with his family, insisted on her joining him in Almaty. In the end, Tatyana agreed to get back on the road.

“It was a very difficult decision for me. I didn't want to leave Ukraine, but I also wanted to see my little newborn grandson,” she says.

Tetyana had to undertake an exhausting five-day journey through Ukraine, Hungary and Qatar.

“I felt so stressed after I crossed the international border, as I could not understand anything in Hungarian: neither the local volunteers nor I could speak decent English. However, during the trip, I did not feel insecure. I was only worried about those people who stayed in Ukraine,” says Tetyana.

Upon her arrival in Kazakhstan, Tetyana could finally take a breath and feel safe, as she was staying with her son, his wife and her grandsons. She also joined the Ukrainian diaspora, which held charity events and rallies in support of Ukraine. However, after three months spent far from home, her homesickness outweighed her sense of security.

“I wanted to go home so badly. I wanted to be back in Kyiv and get back to my work. Part of my family was still living there and I wanted to see them. Once I came back to Kyiv, I was walking in the city and couldn't hold back my tears,” she recalls.

In Kyiv, Tetyana reunited with relatives and friends. Being home also meant that she was finally able to return to her theatre studio. Even though many children had left Kyiv, she managed to produce a play that will be performed in the coming weeks.

“I will not leave Ukraine again, no matter what happens. My current goal in life is to stay in Ukraine and help restore it,” says Tetyana.

“The fear is still there”

For Maria, a communications expert from Kyiv, it took three months until she finally decided to leave Ukraine, fearing for her daughter’s safety.

“During the first days of the war we were hiding in the metro station,” says Maria. “The sanitary conditions were very poor there. So, in the first weeks we had to change several locations in search for a safe space.”

Maria was invited to Spain by a relative who lives there. In the middle of May, Maria and her daughter left Ukraine without any concrete plans, feeling lost about the future and doubting that there would be a way to return home. After initially travelling through Poland, they made it to Spain, where Maria started learning the language. However, after a month and a half, she took the decision to head back to Ukraine. She wanted to be reunited with her husband and stay at her own place.

“The return was not easy... We try to live a normal life, but we understand that the situation is still very dangerous. The fear is still there,” says Maria.

Maria says that now she tries to live “in the moment” and protect her daughter from the experiences caused by the war. At the same time, she is painfully aware she may have to flee again:

“I do not rule out this option. However, if I have to flee again, it should definitely be to a country where I can speak the local language and where I will be able to work,” says Maria.

Click here to read about how we're responding to the Ukraine crisis.