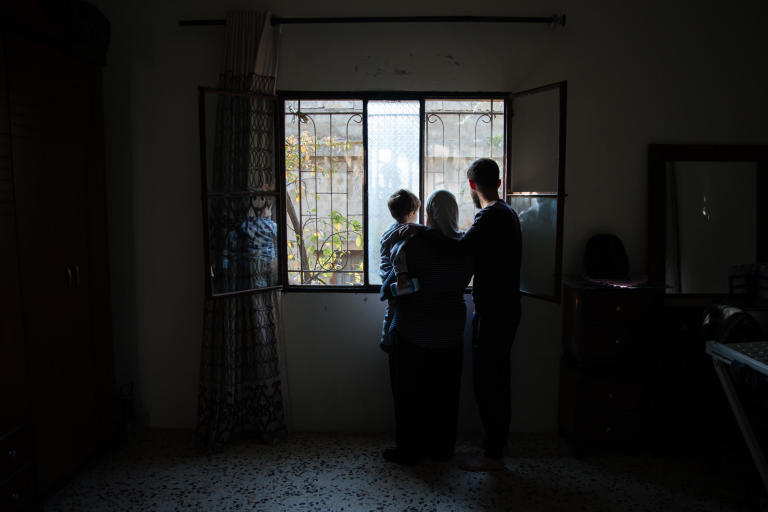 Ahmed Bayram Published 19. Jul 2022
Lebanon Housing, land and property (HLP)
Read caption A Syrian family at risk of eviction standing inside their home in Beqaa, Lebanon. Photo: Sherbel Dissi/NRC
As Lebanon sinks further into crisis, there seems to be a growing consensus that it will take years, and billions of dollars, for the country to recover from a multitude of shocks.

The latest of these shocks has come in the shape of a bread crisis. At the time of writing, fears of the country running out of wheat run rampant. Images of long queues forming outside bakeries circulate on social media. There are even reports of brawls breaking out over bread, people fainting in the heat as they wait for their loaf, and bread being sold on the black market.

Getting hold of bread has become an exhausting business in Lebanon. A fight.

While the direct cause of this latest episode of panic buying lies in the Ukraine crisis – almost 75% of Lebanon’s wheat is imported from Russia and Ukraine – this is only half of the story.

The root of Lebanon’s maladies remains a topic of everyday debate, both in the media and on the street. But beyond these lively arguments, there are people struggling in silence. They belong to different backgrounds but unite in the same fight for survival.

If you speak to those people, they tell you they don’t look forward to tomorrow. Because tomorrow means more meals to plan, more money to somehow find. Tomorrow is one day closer to the end of the month, the scariest time of the month. When the possibility of being thrown out of the house becomes a probability because they won’t be able to pay rent.

Said, a father of four, works in a brick factory but he is only on standby, so his pay is irregular. It only comes when he is called to come in. He’s dreading what is going to happen at the end of the month.

“We have to move out,” he says, sitting on a thin mattress in a bare room surrounded by his wife and four young children. He barely affords 40 US dollars for this underequipped shelter in the Bekaa Valley. This is an enormous sum when worked out in the depreciating Lebanese pound.

“We cannot afford a 100 per cent increase [per month] that the landlord is demanding. It was non-negotiable: ‘throw your belongings out on the street, not my problem,’ we were told,” Said explains.

Housing has become a national crisis in Lebanon, thanks to an unprecedented economic meltdown and a serious decline in purchasing power. Unaffordable rent is a problem that transcends communities. Rent has become such an enormous problem that many Lebanese, Palestinian and Syrian families alike agree it is an expense often prioritised before food or medicine.

With inflation soaring, rent costs keep jumping and pushing more families into debt as they scramble to catch up. Research by the Norwegian Refugee Council (NRC) on the subject shows the average debt for a low-income household to be five times the average rent. Eventually, families will run out of money and face eviction. So far this year, NRC has received almost 15,000 requests for help with rent costs. People are waiting to hear their ‘leave now’ orders any minute.

“We borrow to pay for food and water,” says Ali, originally from Baalbek in eastern Lebanon, and now living with his family of six in Beirut. “I defaulted on rent, and the landlord kept asking for his money. I told him to kick us out if he wanted because we can’t afford to pay.”

Ali was supported by NRC’s programme providing cash for rent support, but there are hundreds of thousands going through the same situation of defaulting on rent. Among those is Bassel*, who as a Syrian had nowhere to take his wife and toddler. He describes how he had to spend ‘’sleepless nights thinking of what to do.” The landlord confiscated the family’s belongings and gave them an eviction notice.

“It all felt like I was carrying a mountain on my shoulders,”

The way out of a perfect storm

The new government should develop an inclusive and affordable housing strategy to help the most vulnerable groups. Evictions cannot be allowed to happen using verbal notices outside the law. This is a serious problem that, if not dealt with decisively, will bring more homelessness, communal conflicts and insecurity in a country already teetering on the brink.