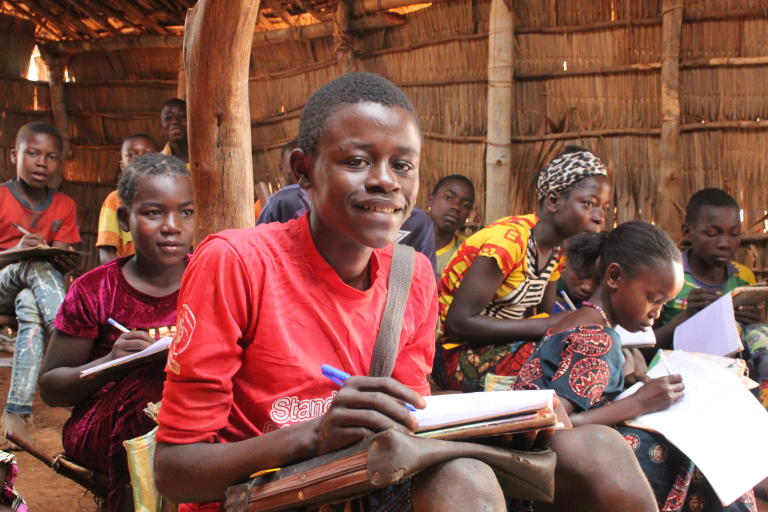 
From gold mine to the classroom

By Chanel Igara Published 26. May 2022
Central African Republic Children Education
Read caption Daniel, 16. Photo: Chanel Igara/NRC
In the mineral rich Central African Republic (CAR), mining is a lucrative industry. The country is peppered with numerous artisanal mines with many unlicensed miners digging earnestly in an attempt to find a life-changing gem or precious stone. Although the legal minimum age for miners is 18 years old, it is common to find children as young as 10 working in these mines. Daniel Kette, 16, was one of these young children.

Armed violence in his village in the Basse Koto prefecture of CAR forced Daniel to drop out of school at age 9. And in 2016, when he was 11, the school he used to attend shut its doors permanently as the school’s teachers were unpaid.

Life in the gold mine

After dropping out of school, Daniel had no choice but to work to help his family make ends meet. He began to follow his father each day to a gold mine site 25 km from his village.

“I had to go to the mine to help my father buy food and pay for medicine when we got sick,” explains Daniel. “Dad couldn't do it alone. I had to help for him and for my sisters who were younger than me.”

The work was physically exhausting. He was tasked with carrying sand and fetching water from the backwater which was 200 metres from the mining site.

"With this work I did every day, I often had back pain and sometimes even trouble breathing at night," he says.

Unfortunately, Daniel’s case is not an isolated one. The closure of schools due to violence has caused several other students from his community to find work in the mines. With the support of the European Union, the Norwegian Refugee Council (NRC) is supporting the return of out-of-school youth in CAR to the classroom. In 2021, we launched our accelerated education programme in Basse-Kotto and Nana-Grébizi prefectures.

After attending an awareness raising session that we held informing community members of the new programme, Daniel’s father decided to enrol Daniel in the programme.

Today, he is back in the classroom. And he has big dreams for himself.

“After spending seven years at home and then in the gold mines, it's time for me to go back to school. Thanks to this programme, I will be able to realise my dream: to become a pilot to bring honour to my village.”

Education is a basic human right for every child. Violence and insecurity all too often rob children of this right. With our accelerated education programme, youth with big dreams like Daniel can keep their hope alive.