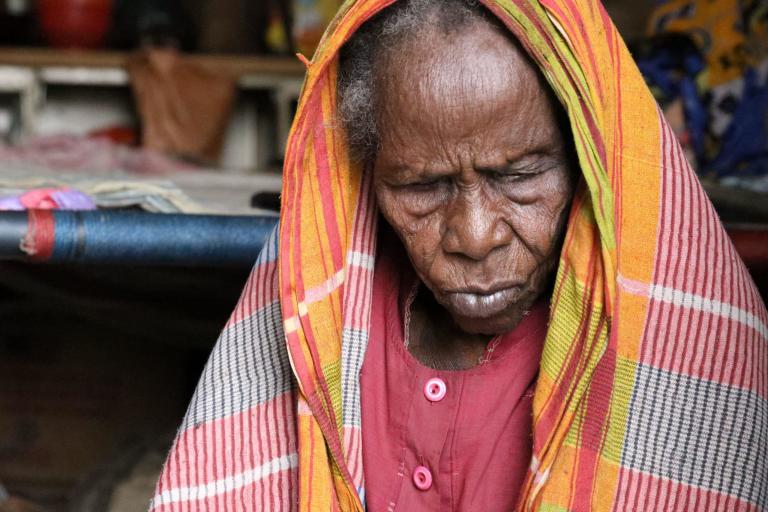 Rawan Kara Published 10. Jun 2022
Sudan Neglected conflicts War and conflict
Read caption Mariam in Geneina, West Darfur, Sudan. Photo: Rawan Kara/NRC
Mariam spends every hour of every day in one room, in the same spot. She’s a mother, a grandmother and a great grandmother. She lives with her family in Geneina, a city in West Darfur, Sudan, in a dark, crowded space that used to be an office. There are only two small windows, shrouded by stacks of old furniture. The heat is suffocating. Mariam passes her days sitting on a praying mat by the door.

“My mother is not able to move. She spends her entire life in this room, at this spot. This is where she eats and washes,” says Hawa, her daughter.

Mariam's trauma is palpable. Her life has been one of perpetual displacement and violence.

Life as a farmer

Twenty years ago, Mariam raised her three daughters in a remote village in the West Darfur state of Sudan. One day, she was farming her family’s land and feeding her children from the crops she harvested. The next day, she was clasping her daughters’ hands and frantically fleeing. Raging fires were devouring the family’s home, and bullets whizzed through the air.

“Right before the attack, some of our neighbours built new homes. The whole neighborhood gathered to celebrate. It was a day full of happiness,” Mariam remembers.

Mariam’s family fled and left the lives they knew behind. They found their way to Krinding displacement camp in Geneina. For twenty years, Mariam and her daughters, sons-in-law and grandchildren tried to move on and start a new life, but life was never the same again.

Over the years, they lost more than one can easily comprehend. Mariam could not afford access to medical care, so she lost her eyesight. Her daughter’s husband attempted to return to their farm to feed their family and was attacked and killed.  Sorrow and fear latched onto their lives, and in 2021, they lived their worst nightmare again.

Last year, the conflict in West Darfur escalated, and Krinding camp was attacked. More than 160 people died, and homes were burned. Almost a third of the camp was reduced to ashes. Mariam’s family and over 40,000 people were displaced a second time. They fled into the city of Geneina and took shelter in any open space they could find. Some went into school or university yards, public hospitals and government buildings. Some even stayed in the streets.

Learn why the displacement crisis in Sudan is one of the most neglected in the world.

Mariam has 384 families as neighbors in this gathering point, which is one of about 100 in Geneina.  Their makeshift shelters are cramped, stacked almost one on top of another.

The families living here are at risk of many health and safety hazards. Over the past six months, fire swallowed homes in seven gathering points. The material used to build the shelters combined with proximity causes fires to spread very fast.

The fire that drove Mariam and her family including her daughter Hawa from their home in Krinding camp, displacing the family a second time, erupted on a peaceful morning. The spring day began with families drinking tea together and ended with a blaze that destroyed 180 family homes.

“As soon as the fire started, the only thing I could do was to throw my mum on my back and run out of there with my sisters and nieces,” says Hawa.

Hawa wishes she and her mother and sisters could return to the family farm in their home village, or even to their home of 20 years in Krinding. But after 20 years of conflict, West Darfur remains unsafe. Since the 2021 attack on Krinding, the situation in West Darfur has only become more violent and volatile. In April 2022, an attack that started in the Kreneik locality of West Darfur, lasted four days and left over 200 people dead.

“I wouldn’t mind going back with just a sheet to live under if they promise we will be safe. But if we’re not safe, we can’t go back,” says Hawa.

Mariam’s daughter Hawa lost her husband and the father of her daughter. Now, she pours all her hope into her daughter.

“Through all of this, I did everything so my daughter doesn’t stop going to school. I took every job I could. I never rested. The only thing I want is for her to graduate,” says Hawa.

The stories of Mariam and Hawa are the reality for many in West Darfur. NRC condemns the violence in the region and attacks on civilians.

Read more about our work in Sudan, and why Sudan has been named a neglected crisis this year.

Stop the neglect
Join us in ensuring that people living in neglected crises get the support they deserve.
Select monthly amount
Choose amount
Choose amount
Please note that you will not get a receipt if the email field is left blank.
Our terms and conditions, including privacy policy statement
Stop the neglect
Personal details:
Remarks
Name
Address
Post
Location
Surname
Personal details:
Remarks
Name
Surname
Select payment method