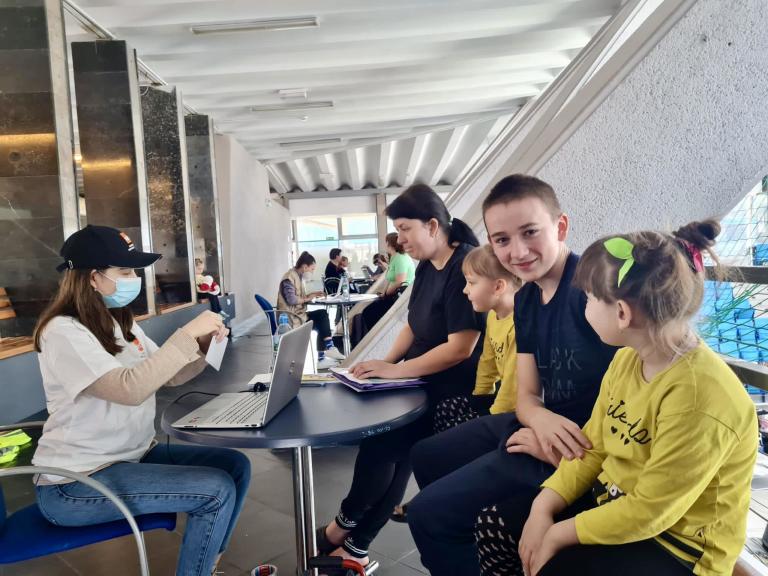 By Joanna Nahorska Published 22. Apr 2022
Ukraine War and conflict
Read caption A family who recently fled Ukraine receiving cash at our reception centre in Lublin, Poland. Photo: Jeanette Fogstad/NRC
Almost two months into the Russia Ukraine war, the Norwegian Refugee Council (NRC) has finalised the first phase of cash distributions in Ukraine, Romania and Poland to those who have been forced to flee.

“Unlimited and unconditional access to cash is a crucial part of the response to the ongoing war – both in Ukraine and in the neighbouring countries,” explains Dominika Arseniuk, NRC’s interim Country Director in Poland. “It is the reason why we advise people wanting to help to give money rather than goods. Goods need to be sorted, packed, shipped, stored, distributed. There may be masses of one thing and none of another thing that’s desperately needed. Cash arrives immediately, can be turned into what people really need and respects the choice of refugees.”

In Poland, together with the Polish Centre for International Aid (PCPM), NRC distributed cash to 1,730 households last week, targeting the most vulnerable people in cooperation with the local authorities in Lublin, Otwock, Gdynia, Władysławowo, Hel and Łódź. Refugees were provided with an unrestricted bank card which they can use both in Poland and abroad without bearing any additional fees. The assistance provided amounts to approximately USD 152 per family member. Ninety-one per cent of those receiving the cash were women, many with children.

“We spend all the money on food”

In Ternopil, Ukraine, over the past month, NRC supported over 900 families fleeing conflict hotspots in the eastern and northern regions of the country in collaboration with the Stabilization Support Services. Eighty per cent of people receiving this support were women with children who had fled fierce fighting in Kharkiv, Kyiv, Donetsk and other regions.

“Financial assistance was critical for me because my children and my mother, who was forced to leave the country, and my brother, who lost his job, relied on my support,” says Daryna, a mother of three. “We spend all the money on food. I would have not been able to do it on my own, and thanks to the aid, we have the things we need.”

On both sides of the border, Ukrainian families tell NRC that the cash assistance allows them to buy food, things for their children and accommodation. Since the beginning of the response, our partners have noted an increase in medical needs, especially among the elderly or families with children with disabilities.

In Ukraine, the money is largely spent on temporary rental. “My husband and I were evacuated to Ternopil without understanding how to live and what to do,” says Valentyna, a displaced person from Sloviansk, Donetsk region. “We were grateful for the financial support. We spent this money on accommodation, food and medicine.”

“We were grateful for the financial support. We spent this money on accommodation, food and medicine.”

Since many people flee without anything but documents, cash allows them to recover while living away from home, our surveys report, and make it through the challenging time with dignity. In Poland alone, 79 per cent of those who received money withdrew cash from their cards, signifying they are potentially willing to stay in the country for the foreseeable future.

In Ukraine, NRC is currently shifting to digitalised registration and two-way communication with communities, which will enable a significant scale-up in multipurpose cash provision.

NRC has also finalised a cash pilot project in Romania and is now mapping the possibilities of extending the assistance. However, since our teams report that people have now started returning to Ukraine due to their savings drying up, it is of utmost importance that funding is boosted for cash response in the region. This will allow international organisations and local NGOs to continue distributing live-saving assistance and ensure people can make informed choices about their present – and their future.