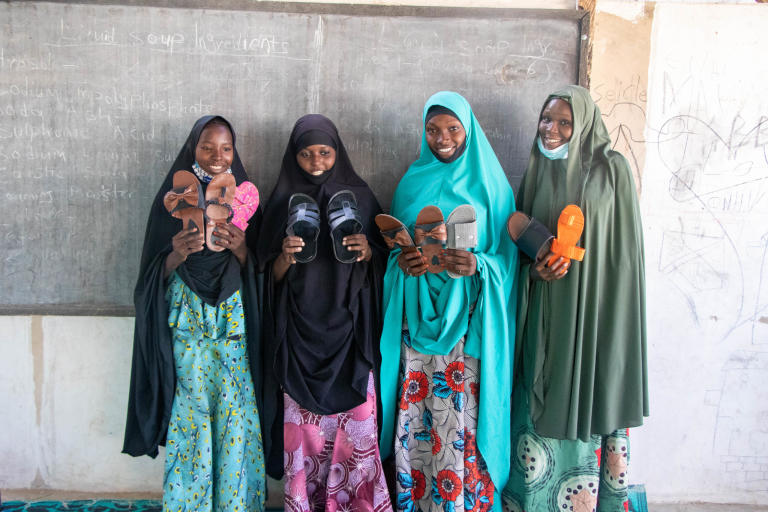 
The entrepreneurial ambitions of young people

By Samuel Jegede Published 14. Jan 2022
Nigeria
Read caption Zuwaira, 22, Hafsat, 19, Zara, 18, and Suliat, 15, have big ambitions for the future. Photo: Samuel Jegede/NRC
At the Sannawiya learning centre in Maiduguri, Nigeria, a group of young men and women sit in a circle. They’re watching on as their teacher shows them how to cut and trim leather to make sandals. The students pay eager attention, hoping that this new skill will help them start small businesses of their own.

The ongoing conflict in north-east Nigeria, which is now in its 12th year, has claimed over 350,000 lives and forced two million people to flee their homes. Some were budding business owners, some worked in fishing, others were farmers, but they were forced to leave it all behind to live their lives in a displacement camp.

Among the most affected are the children and young people who are forced to drop out of school when they flee. Many children are left to roam the streets where they beg or sell petty items to make some money for their families. This leaves them highly vulnerable to abuse and exploitation.

Schools provide a place of safety and stability to children and young people, where they have the opportunity to reach their full potential. But in Nigeria, more than 10 million children are unable to access education services. Nearly 70 per cent of these children live in the northern states. Over 2,000 schools have been destroyed or closed since the start of the conflict. Kidnapping of children and attacks on schools are frequent.

Since 2019, the Norwegian Refugee Council (NRC) has been providing vocational skills training to out-of-school adolescents in Borno State. With the support of UNICEF and the European Union, the participants are learning skills such as carpentry, soap making, cap knitting, sewing and hairdressing.

Working together to build a future

Zuwaira, 22, Hafsat, 19, Zara, 18, and Suliat, 15, are neighbours. They’ve lived in the same displacement camp for several years and have come to see each other as sisters. They attend our training centre where they learn how to make shoes and sandals; a skill that is usually reserved for men and boys.

We chose shoemaking because we believe that ‘what a man can do, a woman can do even better!’
Zuwaira

“When we learnt that an organisation was registering young people and children to come and learn, we saw it as an opportunity,” says Zuwaira, the oldest of the group.

“We wanted to learn a skill that could help us become better people. We chose shoemaking because we believe that ‘what a man can do, a woman can do even better!’ We started learning a few months ago. Now we can make shoes for ourselves.”

NRC provides participating students with a package containing the tools and materials they need to apply their new skills after they graduate. With over 7,425 vocational education graduates so far, the impact has been tremendous. Zuwaira and her friends have big plans.

“We have decided to come together to build a shared business. We know that together we will have more capital and will be able to set up a bigger business compared to if we were to set up ourselves individually. We believe in a short time we will be able to show the good results of this decision,” says Zuwaira.

By providing young people in north-east Nigeria with basic education, vocational skills and the tools they need to start their own businesses, NRC's intervention aims to strengthen their resilience and provide the opportunity to build a brighter future, even amidst the enduring conflict.

Read more about our work in Nigeria