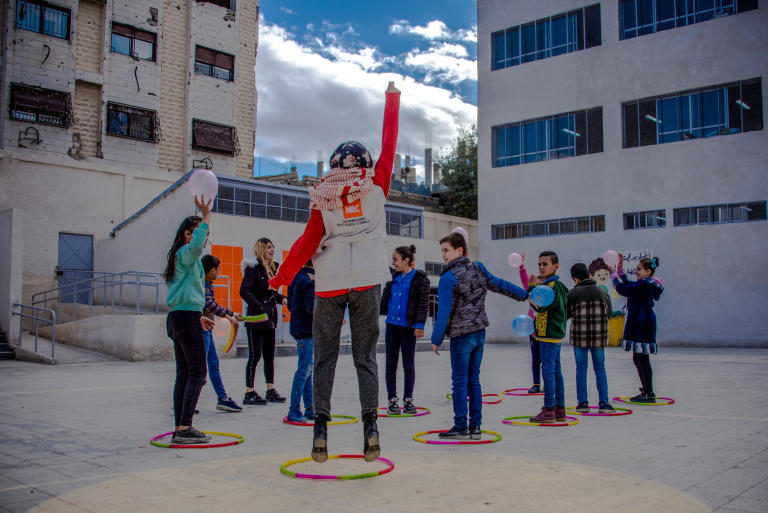 Oula Mashfj Published 26. Jul 2022
Syria Education War and conflict
Read caption Children's activities at the newly rehabilitated Barzeh School in Syria. Photo: NRC/Tareq Mnadili
Schools are one of the few spaces in Syria where children can still learn to dream of a better future. Yassin, 70, is desperate for his 10-year-old granddaughter, Sham, to not lose access to a quality education because of the Syrian crisis.

Yassin has six children, two boys and four girls. His daughters went to Barzeh School in Damascus, Syria. They graduated long ago, and now have children of their own. Sham, 10, is one of those children. She was due to follow in the footsteps of her family and attend Barzeh School – until it was destroyed in the conflict.

In Syrian society, education is highly valued. Before the crisis began in March 2011, Syria could point to a healthy record in basic education. An estimated 97 per cent of primary-age children were attending school, as were 67 per cent of secondary-age children. Literacy rates countrywide were high, at over 90 per cent for both men and women.

“I never imagined that when I would be old enough to go to school, that my school would be this ugly,” said Sham prior to the rehabilitation. “I do not like it. When I walk near the building, I feel sad.”

"We sacrifice a lot for our children and do our best efforts to support their education."

Yassin says: "We sacrifice a lot for our children and do our best efforts to support their education. There is a big difference between the educated and the uneducated. Educated people are more rational as education provides them with logic, expands their horizons and capabilities, and enhances one’s living conditions.”

Education system hanging on by a thread

In war times, children’s access to education is hindered. According to the latest figures, inside Syria, one in three schools can no longer be used because they have been destroyed, damaged or are being used for military purposes. This means that there are over 2.4 million children out of school.

Eleven years of conflict are actively affecting children like Sham’s present and threatening their future. With Barzeh School heavily damaged, its administration rented some houses to use as a makeshift school building.

“Sham and her fellow students left this school because the building was destroyed,” says Yassin.

Having large numbers of elementary students in small rooms made both teaching and understanding lessons very challenging.

“As a temporary solution they used a small house," Yassin says. "Nothing about it resembled a school, but they had to use it because there were no other alternatives. It was not suitable for teaching and students couldn’t comprehend a word.”

According to a Norwegian Refugee Council (NRC) survey, a Syrian family needs 450,000 to 500,000 Syrian pounds (around USD 180-200) a month to cover essentials including food, power, medicine and rent.

The income gap has continued to widen with average household expenditure now exceeding income by 50 per cent. According to OCHA, only 10 per cent of households have an income above the cost of Syria’s minimum expenditure basket.

Equipping one child with a school bag, uniform and stationery, such as a pencil, pen, notebook, eraser and sharpener are estimated to cost around 33 per cent of the income a public sector employee earns per month. A percentage that can increase and even double in a few weeks. Some parents say they would not be able to send their children to school if they are not supported by local or international NGOs.

Another problem is fuel and food shortages, resulting in long waiting lines and traffic. If Sham’s parents chose to enrol their daughter in a school further away, where she would be offered better quality education, the effects of the fuel shortages on the availability of public and private transportation would mean she would have to leave home at least an hour earlier and arrive home at least an hour later.

She would be stuck in traffic and be exposed to cold weather and other risks. The transportation fees would have exhausted their low-fixed income. The 10-year-old would arrive home cold, tired and distracted.

With Barzeh school unavailable, children like Sham were desperately missing out. NRC decided to intervene by rehabilitating the former school, removing all physical evidence of war and creating a welcoming school environment for the children.

"During the rehabilitation process we faced many challenges,” says Mohammad, an engineer from NRC’s shelter team. “A sewage leakage in the basement required two to three months of work. There was a huge amount of debris, war remnants and tunnels under the school.”

The initial three-month schedule was extended to five months due to the challenges the team faced.

“I feel very happy to have finalised this project...I used to live in this area, so I feel great about being able to serve my local community."

“The foundations of the buildings were greatly destroyed, which required a longer time to rehabilitate," Mohammad says.

"In addition, purchasing construction materials from the market was a big challenge due to Covid-19 and the overall economic situation in the country. But we were able to tackle all challenges together.”

The team restored life in the school.

“I feel very happy to have finalised this project for two main reasons. This project was huge and challenging and the other is that I used to live in this area, so I feel great about being able to serve my local community," Mohammad says.

The walls were painted in bright colours and decorated with drawings symbolising children’s rights and promoting healthy attitudes among children. Accessibility ramps were built to improve inclusion among children with disabilities.

After finalising the rehabilitation work, NRC’s education team provided teachers with training. They learned interactive teaching methods to engage the children and hold their attention throughout lessons.

Layal, 30, an art teacher, was one of the teachers who participated in the teacher training.

“Although I have five years of experience, the training benefited me a lot,” says Layal.

“It has provided me with a lot of knowledge in how to deal with children and how to explain lessons in ways that are easier to understand. These techniques have many positive impacts. Using them is the least we can do to help Syrian children heal from the psychological scars they are suffering due to the conflict."

“When I grow up, I want to be an engineer,” says Sham. “I want to build a school just like this one and fix other destroyed schools.”

Yassin is happy that the school has now been rehabilitated.

“I feel honored walking into this school,” he says.

“All of my girls studied here and now my granddaughter is too.”

He says that his granddaughter is smart and can have a bright future if she keeps up the hard work. He helps her with studying and the time she spends with him is her favourite. These warm memories with her supportive grandfather will light her steps into becoming an engineer as she dreams.

Learn more about our work in Syria