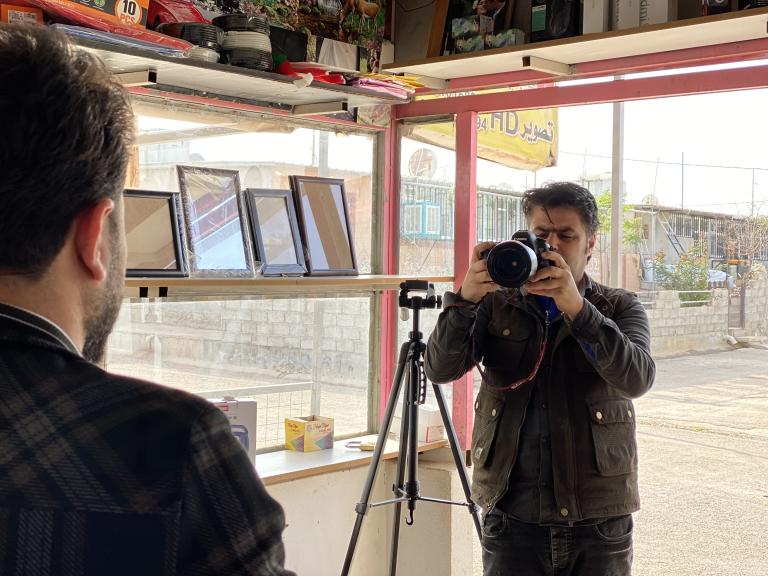 
A picture of success

Noor Taher Published 07. Feb 2022
Iraq Livelihoods and food security Training
Read caption After fleeing Syria, Muhammad has managed to re-establish his photography business in the Kurdistan Region of Iraq (KRI). Photo: Noor Taher/NRC
There are moments in life that we would like to last forever. Photography is one way to relive these moments and connect us to the past. Muhammad was forced to abandon his past when he fled Syria. But with help from the Norwegian Refugee Council (NRC), he has been able to re-establish his photography business in the refugee camp where he now lives.

Muhammad is 35 years old and was born in Syria. Ever since he was a child, he has had a passion for taking photos.

When he was 15, Muhammad would assist his older brother in his photography shop, helping to tidy up the store. As he grew older, Muhammad worked up to become his brother’s partner at the shop and was responsible for photographing special events in their local area.

Muhammad says that working at these events is what made him so passionate about photography as a hobby and a career. They made him feel that he had been trusted to capture special moments and make memories that people would never forget.

“I love it when I see the smile on my customers’ faces,” he says, “and how they will keep the photos to show their children and tell them all the stories behind those memories. Being part of making someone happy, what more could I ask for?”

From Syria to the Kurdistan Region of Iraq

Muhammad was forced to flee to the Kurdistan Region of Iraq from Syria in 2012 with his wife and children. He lived in Kawergosk Refugee Camp for the first two years and later decided to move to a camp in Duhok, to be closer to his brother.

Since leaving Syria, Muhammad has worked tirelessly to provide a better future for his children. They have motivated him to continue pursuing photography and improving his skills.

Muhammad was able to build a small photography shop near his home in the camp. Even though his oldest child often helped him, Muhammad could not afford to expand his business or purchase the equipment he needed.

He did not have the resources to buy his own camera and would often have to rent cameras for events. While he was committed to utilising his photography skills as a career, he felt stuck and unable to develop his business without support.

Luckily, Muhammad soon found out about an opportunity for small business owners to receive training and financial support from the Norwegian Refugee Council (NRC). He eagerly signed up.

The training proved invaluable. The knowledge Muhammad gained helped him to strengthen his communication skills with customers and use new marketing strategies. He also received useful guidance on policies and regulations, as well as how to select appropriate prices for his services.

Following the training, Muhammad received the first instalment of the business grant, through the support of the European Regional Development and Protection Programme (RDPP II).

With the 1,300,000 Iraqi dinars (around 900 US dollars), he was able to purchase two photo printers, a tripod, a light reflector, photo frames and albums, and shelves.

The support has enabled him to expand the services he can provide, such as filming at weddings and other gatherings with his tripod and light reflector, as well as offering passport photo services with his printer. The training and resources have helped Muhammad expand his sources of income and strengthen the sustainability of his business.

With the second instalment of the grant, Muhammad plans to buy two cameras and a laptop to continue to expand his business and support himself and his family.

This project is funded by the European Regional Development and Protection Programme (RDPP II) for Lebanon, Jordan and Iraq, which is supported by the Czech Republic, Denmark, the European Union, Ireland and Switzerland.

Read more about our work in Iraq