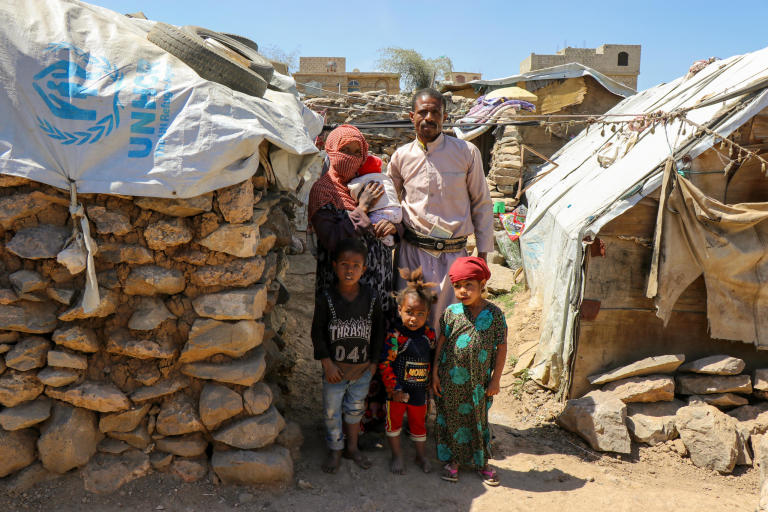 Jan Egeland Published 28. Feb 2021
Yemen
Read caption Mohammed and his family are displaced from Amran. “I built this home with my wife. I started to collect stones. I spent more than a year collecting them, stone by stone.” Photo: Mohammed Hasan/NRC
Saudi Arabia, the United Arab Emirates, Kuwait and Qatar must act now to avert a manmade famine unfolding on their doorstep.

On Monday, world leaders will meet to decide Yemen’s fate. The United Nations is warning that almost US$4 billion dollars must be raised to keep the country’s overstretched aid operation afloat. Malnutrition has hit record levels. Nearly 50,000 people are already essentially starving to death. Without a hard injection of cash, the world could soon witness a full-scale famine on a historic scale.

I return to Yemen tomorrow to speak with families trapped in the world’s worst humanitarian crisis. My last visit in 2017 left me deeply shaken. As a former United Nations Under-Secretary-General of Humanitarian Affairs, and now head of one of the world’s largest humanitarian groups, I regularly meet people suffering all over the world. But I still remember vividly the unprecedented scale of hunger and misery I saw in Yemen.

It was unimaginable that conditions could get any worse, but they have. It is infinitely worse now. This year half the country’s 30 million people will go hungry. Hundreds of thousands of children, most of them just a few years old, are so severely malnourished that their young bodies are slowly failing.

And not because of a drought or an earthquake. Manmade war and policies are causing this mass starvation.

Our experience in Somalia tells us that by the time the label of famine is used, it’s already too late. People in Yemen have spent six years without enough food, which has killed an unknown number and irreversibly stunted an entire generation’s development.

My organisation spoke out after that visit in 2017. When a famine warning was sounded a year later, we were relieved when the international community responded with urgency. Funding was rapidly scaled up, including by the Gulf countries. The relief effort was expanded. Support was channelled into Yemen’s economy. Famine was averted.

Fast forward to 2021 and Yemen is again being pushed to the edge. But this time commensurate funding has not materialised.

The impact of this can be counted in lives. Nine million people who rely on food aid to survive are now only receiving half rations. And in the middle of a global pandemic, the water supply for 15 major cities has been halved.

One of the most impressive things in this part of the world is how generosity to others is considered a sacred act. In Yemen, tens of thousands of people have been kept from starvation or death by neighbours and strangers. Farming communities have sheltered waves of people fleeing bombs and bullets, families have shared their food and clothes, and countless Yemenis have opened their homes to others in greater need.

This is the kind of solidarity Yemen needs right now from its neighbours.

Leaders from Saudi Arabia, the United Arab Emirates, Kuwait and Qatar are expected to participate in Yemen’s international funding conference. These nations have been some of the biggest contributors to past relief efforts. But last year that came to an abrupt halt.

The Kingdom of Saudi Arabia was Yemen’s largest donor in 2019. But it cut its contribution to Yemen’s UN Humanitarian Response Plan by 65% in 2020. The United Arab Emirates cut its funding to the response plan by a shocking 95%, from $115 million to less than a million. Qatar cut its contribution by more than half. And Kuwait eliminated almost 100% of its donations last year.[1]

This is not just about being a good neighbour or good international citizen. Saudi Arabia and the United Arab Emirates also hold responsibility for the dire conditions in Yemen because of their direct involvement in its conflict. The $3.8 billion needed to fund aid operations in Yemen pales in comparison to what has reportedly been spent on the war by the Saudi-led coalition.

At the absolute minimum, Yemen’s neighbours should give at the levels they did before 2020. Other major governments must dig deep too, especially the United States and the United Kingdom, who have also played roles in this brutal six-year conflict. And pledges must be converted rapidly into cash on the ground, so that aid agencies can act without delay.

Other steps must follow after that to relieve Yemen’s suffering, including a package to control spiralling food prices and avert economic collapse. Blockades on fuel imports must be eased. Gulf actors, particularly Saudi Arabia, the United Arab Emirates, the Yemeni parties on the ground and Iran, will all be instrumental to negotiating a ceasefire and an end to the conflict which is the root cause of hunger in Yemen. But it begins with enough aid to stave off a complete collapse.

Yemen is running out of time. Monday can be the first step towards relief, or the day its neighbours abandoned it.