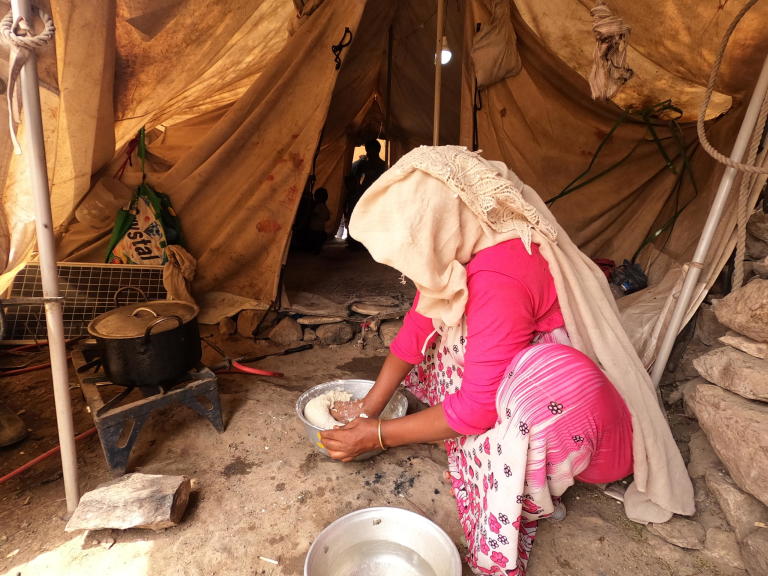 Mohamed Abdi, NRC's country director in Yemen Published 10. Jan 2021 Edited 13. Jan 2021
Yemen Livelihoods and food security
Read caption A mother prepares lunch for her family inside their tent in Al-Malika camp, Yemen. Displaced Yemenis are in dire need of food as prices rise. Photo: Khalid Al-Banna/NRC
“Yemen is not starving. It is being starved.”

This article was originally published by The New Humanitarian, a news agency specialised in reporting humanitarian crises.

Last year was long and hard for all of us, but especially so for Yemenis, who were already suffering through the world’s worst humanitarian crisis. And as 2020 drew to a close, the country was hit with two final shocks: an attack on Aden airport that killed at least 22 civilians, including aid workers, and chilling new data showing that millions of Yemenis are close to starvation.

The numbers going hungry are expected to worsen in the coming six months. If these projections prove true, 2021 may bring the worst famine the world has seen in decades.

But world leaders can still avert that catastrophe.

I was working in Yemen in 2018, when famine warnings were last sounded. We all knew that unless something was done, people would die. That time, the international community stepped up: aid funding was released, the economy was stabilised and food prices were eased with an injection of cash.

Now we’re fighting the same problems again, with the addition of Covid-19. Much-needed fuel is being blocked, doctors and teachers are going unpaid, and the UN-coordinated aid response is underfunded. And perhaps worst of all, the violence is increasing.

My organisation, the Norwegian Refugee Council, recently found that an average of seven civilians a day have been being killed or maimed by armed violence in the past two years, despite a December 2018 agreement meant to bring a measure of peace.

Everyone here understands that the war is what is ultimately driving the country towards famine. Because Yemen is not starving. It is being starved.

On the ground in Yemen, we have watched for nearly six years as bombs and bullets have shattered the nation’s ability to feed itself.

We work with fishermen like Suleiman, who abandoned the seas off the coastal province of Hodeidah because airstrikes and sea mines were killing his friends while they fished.

We work with farmers, who are being bombed in their own fields. Food imports – in a country 90 per cent dependent on them – are being choked by restrictions, fees, and double inspections. A political tug-of-war over fuel is preventing crops from being irrigated or transported to markets. Aid agencies are being blocked from reaching hungry communities, and food prices are shooting up.

Those who have jobs are often not paid for them: an estimated half a million doctors, teachers, and other public servants have not received a salary in four years. One social worker we spoke to used to register vulnerable people for welfare support; now he is crowded into another family’s shelter and collecting plastic bottles for cash.

If this were not enough, an economy already shattered by war has been dealt another blow by Covid-19, as the levels of cash sent home by Yemenis working abroad have dropped. The riyal [Yemen’s currency] fell to a record low last month, meaning the same money now buys dramatically less food.

We are close to, but not beyond, the point of no return.

Yemenis have helped each other survive, by taking in family members and strangers, and sharing what little they have. But they can only do so much, and more and more people are depending on aid just to survive, at the same time as the aid fund for Yemen is currently short by USD 1.7 billion.

This lethal combination of factors is pushing Yemenis closer to the cliff-edge of famine. Even if it doesn’t yet meet that technical definition, waiting too long to help risks condemning thousands to death, as we saw so tragically in Somalia. By the time famine was officially declared there in July 2011, over 100,000 people had already died.

We are close to, but not beyond, the point of no return. World leaders can prevent a famine if they do four concrete things.

First, lift the blockages on vital supplies. The United States, the United Kingdom, France, and other nations that work with the Saudi Arabia and United Arab Emirates-led coalition must broker an agreement to use fuel revenues for paying public servants, and mobilise an economic rescue package. This would bring food prices under control and enable Yemen to import enough to feed itself.

Second, restore aid so organisations like mine can assist people who need it. Gulf countries embroiled in this war have stumped up just a fraction of last year’s funds while starvation is spreading. Meanwhile US assistance to northern areas controlled by Ansar Allah (otherwise known as the Houthis), home to 80 percent of the country’s population of around 30 million, remains suspended.

These severe cuts mean that over eight million people being supported by aid organisations have seen their food rations halved. Fathers tell us they are going hungry so their children can eat. In 2018, a scale-up in aid helped stave off famine. We need the same generous response again at this critical tipping point.

Third, end impunity. Late last year, a group of experts on Yemen released a damning report documenting an utter disregard for the laws of war by all sides of the conflict. Using starvation against civilians is a war crime. Violations should be independently investigated. UN member states should demand consequences for the farmers killed and life-saving infrastructure destroyed by all warring parties.

Fourth and most urgent of all, stop the fighting. No amount of money will solve the problems this war continues to create. We need a permanent solution that ends the vicious cycle of conflict, starvation, and destruction. Countries who have taken sides in this conflict should demand a ceasefire, now.

What is happening here in Yemen will be a test of our shared humanity. For nearly six years, Yemeni people have been shouldering an enormous burden. They are exhausted, grieving, and feel abandoned.

We can stand by and let this war rage on, blighting millions of lives and making Yemen a byword for death and failure. Or we can act to finally end it.

This article was originally published by The New Humanitarian, a news agency specialised in reporting humanitarian crises.