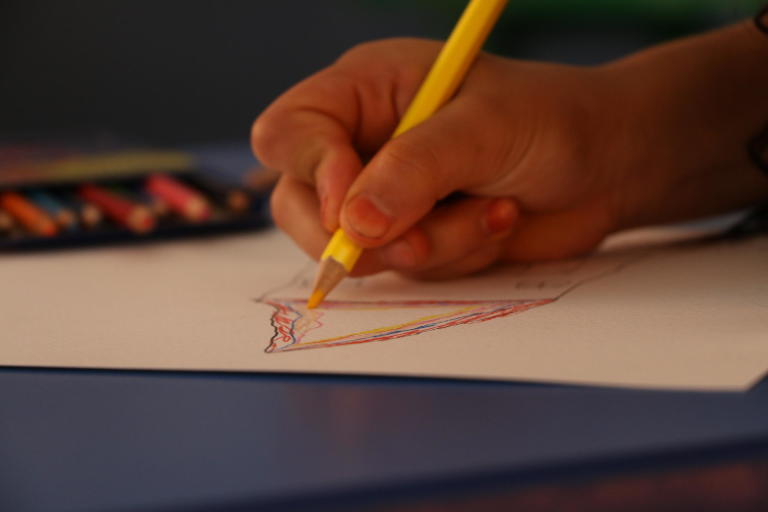 
The road to healing for Beirut's children

Rebecca Crombleholme Published 03. Feb 2021
Lebanon Children
Read caption Drawing is a technique used at NRC’s education centre to help children process the trauma from the explosion. Photo: Photo: Zaynab Mayladan/NRC
Six months ago, on 4 August 2020, a huge explosion devastated Lebanon’s capital, Beirut. With broken glass and debris covering the streets and thousands of homes destroyed, the blast terrified many residents. None more so than the city’s children.

Yousef Sarhan is a 10-year-old Syrian refugee living in Beirut. He and his family were at home when the explosion happened.

“My mother was sitting outside. My father was sleeping,” recalls Yousef. “Me and my brother were on the bed when we heard the explosion. We ran outside and lay down on the ground. I was terrified.”

Yousef is one of hundreds of children who are taking part in the Norwegian Refugee Council’s psychosocial support classes. The classes were set up as a response to August’s explosion and build on NRC’s better learning programme.

For children like Yousef, who live close to where to explosion took place, the impact was very real. Some children have had nightmares and been unable to sleep. Some feel stressed, and scared that another explosion might take place.

Children often struggle to process and understand these kinds of emotions in the way that adults do. Through child-friendly activities, our classes have helped the children of Beirut to understand their feelings and anxieties better.

Chadi Zein is one of the emotional support facilitators at NRC’s education centre in Beirut. Chadi welcomes the children to their weekly sessions with warm enthusiasm. When the children arrive, they’re invited to point to how they’re feeling on a scale: from very happy to very sad, or angry.

It’s through these types of exercises, Chadi says, that children begin to learn how to understand and process their emotions.

“Before coming to the centre, the children don’t know what they are feeling. They can live in a particular state but they’re unable to understand what it is that they feel,” he explains.

“But at the centre they learn that these feelings are normal. Sometimes, events can cause stress, and the children learn what they can do to relieve it, so that these events do not disturb them. At a certain point it begins to change their lives.”

The children learn to integrate the strategies into their everyday lives, so they can cope with stressful situations and thrive at school.

“The children are responding beautifully. Each child takes it at their own pace and rhythm,” says Chadi.

These classes should happen everywhere

The classes are available to children between the ages of four and 14. The area most affected by the blast is multicultural, and so far, we have had Lebanese, Syrians, Iraqi, Sudanese, Palestinian and Filipino children join the classes. Parents are invited to enrol their children on the programme if they feel it will be helpful.

“The parents have said to me: ‘what are you doing with the children? They are transformed!’ They are feeling the evolution of their child,” says Chadi, with pride.

For many Syrian refugee children, the explosion six months ago triggered some traumatic memories from the time when they were forced to flee. In addition, all children in Lebanon (and around the world) have been affected by the disruption to daily life that the Covid-19 pandemic has caused.

Chadi believes that teaching all children from a young age how to deal with unexpected and traumatic events is invaluable.

“These activities are one of the most important things that a student can learn, and not only in times of difficulty. These types of classes should be practised in every school around the globe. They would help to achieve peace in the world.”

Our response to the Beirut explosion has been made possible thanks to the generous support of people like you who have donated to our fundraiser. We would also like to thank the European Civil Protection and Humanitarian Aid Operations, the Norwegian Ministry of Foreign Affairs, the German Federal Foreign Office, the UK’s Foreign, Commonwealth and Development Office and Agence Française de Développement for their continued support.