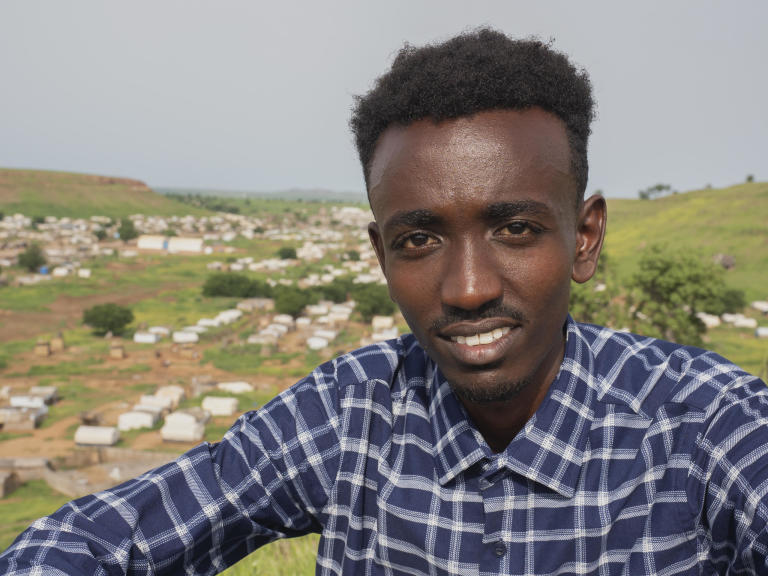 
“The biggest gift is having my friends around me”

Rawan Kara Published 19. Nov 2021
Sudan Camp management Youth
Read caption Aklilu was just five weeks away from graduating when he was forced to flee to Sudan. Photo: Ingrid Prestetun/NRC
One moment, Aklilu was a high-flying engineering student with a bright future ahead of him. The next, he was a refugee living in a makeshift tent. But Aklilu refuses to give up. In the camp where he now lives, he has formed a youth association with a group of fellow students. Together, they are determined to make life better for their community.

In November 2020, Aklilu packed his bags for a trip. He was travelling back to his university in Addis Ababa, the capital of Ethiopia. He had spent a few months with his family in Humera, a small town nestled in the most north-western part of the country, due to the Covid-19 lockdown. Aklilu was excited to finally resume classes and graduate.

Like other soon-to-be graduates, Aklilu was already job hunting and had plans to celebrate. “I’ll see you in five weeks for our graduation ceremony,” he told his friends in Humera.

We never expected this could happen. I had heard there were issues, but to me they were just politics.
Aklilu

A few hours later mortar-fire ripped through the town. It signalled the start of a conflict between the federal government of Ethiopia and armed groups in the Tigray region. Aklilu hurried across the border into Sudan – one of 60,000 Ethiopians who have since poured into Sudan in search of safety.

Aklilu fled with nothing, leaving his education in Ethiopia behind. Once a top civil engineering student, he now lives in a refugee camp and waits for updates about the war back home. He wonders if the past five years of college education have been for nothing.

“We never expected this could happen. I had heard there were issues, but to me they were just politics. I never knew things could become this bad,” Aklilu says.

When Aklilu first arrived at the Um Rakuba refugee camp, he lived with his family under a blue tarp that hung over a makeshift wooden framework. A latrine was nearby and the smell overpowered the aroma of the coffee his grandmother made each morning.

A few weeks later, the family relocated to another space and were given a white tent with a good-sized opening in the front and back. But in the rainy season the tent became a parachute. Aklilu became bleary eyed from holding the tent down each night to stave off the winds.

“When I was in Ethiopia, I loved the rainy season. You can’t do anything but sit and watch the rain come down. That was my favourite time,” says Aklilu.

Some 1,655 other Tigrayan university students are currently living in refugee camps in Sudan. They feel abandoned.

“A result of the conflict in Ethiopia is that some of the brightest minds in the country are confined to refugee camps in Sudan,” says Will Carter, the Norwegian Refugee Council’s (NRC) country director in Sudan. “If these students are given a chance somewhere, they’ll be a spark for whoever accepts them.”

Many hurdles stand in the way of Aklilu getting his degree. When the violence started, he and many others fled and left behind their identity cards and education records. As result, they are now unable to provide proof of who they are or how far they have progressed at university. Money is also an issue.

We might not find a job for a long time. We will be wasting a lot of time in our life.
Aklilu

Recently, Aklilu has been exploring going to a university in Ghana under a scholarship. However, such scholarships tend to mean that students lose all the progress they have made to date and have to start from scratch.

Aklilu is frustrated that he may have to spend another five years studying for a civil engineering degree he was only five weeks away from receiving.

“We are waiting to find a university that will accept the credit we have from our university back home. If we start over, we will be 30 years old by the time we graduate. We might not find a job for a long time. We will be wasting a lot of time in our life,” says Aklilu.

Life in Um Rakuba camp is frustrating for young people who are used to being able to travel freely to study and seek work.

“The worst thing about living in the camp is that there is no movement,” Aklilu explains. “It’s like being in a prison. It’s difficult, because everyone needs to have his own freedom to work freely and to do whatever he wants.

Sudan’s 2014 Asylum Act gives refugees the right to move and seek an education, but in reality, they are restricted to the camp. The encampment policy prevents residents from leaving the site, limiting their access to jobs and markets.

“Ethiopian refugees cannot leave the camp unless they acquire a permit from the authorities for worthwhile reasons, linked to education, health or jobs. Unfortunately, these permits are very hard to get – so it becomes a vicious circle. Refugees can’t get opportunities to leave the camp if they can’t leave the camp to look for them.”

Despite all the hardships, the students in the camp have found support in togetherness. They have formed a group, called the Tigrayan Refugees University Students in Sudan Association, or TRUSS.

Aklilu is one of the founding members. “If we share our feelings and if we are together, it will be easier,” he says.

As well as working towards their education, the students of TRUSS are acting as community mobilisers, along with other young people in the camp.

“The community needs so many things here in the camp, and we can contribute something for them,” Aklilu continues. “We are planning how to make this camp comfortable both for the youth and for the community. That’s what we are doing as an association and as a group. Because to be together is very important.”

Every Friday morning, members of the association gather in a communal tent for their weekly meeting. They have organised themselves into committees and are planning their week ahead.

One group will fundraise among camp residents to help an isolated elderly woman in the camp. Another group will meet other students and young people to connect them with aid organisations.

The thing that makes me optimistic is that I have friends here, and I’m discussing with them about what to do for the future.
Aklilu

TRUSS members have been helping organisations like NRC to rebuild shelters, organise cash distributions and register children in school, as well as raising community issues. They receive stipends from aid organisations, which help them support their families.

“I haven’t lost hope,” says Aklilu. “The thing that makes me optimistic is that I have friends here, and I’m discussing with them about what to do for the future. Even though it is not like a plan, we can share our daily activities.

“The biggest gift in my life is having my friends around me.”

How NRC is helping

We are present in Um Rakuba camp, supporting refugees with shelter kits so they can rebuild and reinforce shelters destroyed by the rain. We also distribute cash so that residents can meet their basic needs, as well as other essential items such as dignity kits for women and girls.

When refugees started arriving into Um Rakuba, NRC was one of the first aid agencies to provide education. Right now, we have four schools in the camp, and we also distribute learning materials such as school bags, notebooks, water bottles and pencils. Our education activities are generously funded by Education Cannot Wait.