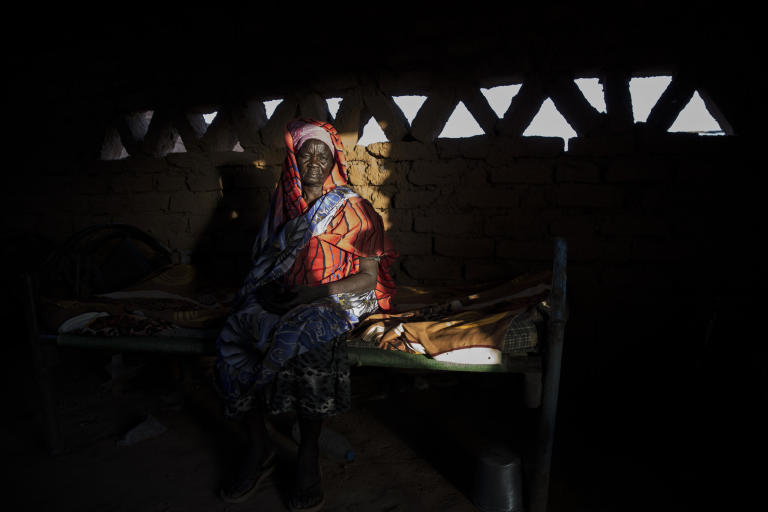 
South Sudanese refugees in Khartoum are still in limbo

Rawan Kara Published 30. Jul 2021
Sudan Livelihoods and food security
Read caption Apuk Bak is determined to help her community. Photo: Ingebjørg Kårstad/NRC
Even though she has lived in a displacement camp for the past five years with little food and water, 68-year-old Apuk Bak remains selfless. She is a mother, a grandmother and a women’s leader in the South Sudanese refugee community on the outskirts of Khartoum, the capital of Sudan.

“When I close my eyes to think of a wish, I only dream of serving my community and my family,” Apuk says.

Many, like Apuk, were excited to go to a new nation, but it became a paradise lost. War came to South Sudan in 2013 and the temporary departure sites on the outskirts of Khartoum grew and became informal settlements for refugees.

NRC works to support refugees and displaced people in over 30 countries around the world, including Sudan. Support our work today

Now, ten years after South Sudan’s independence, displaced people still live with uncertainty in Sudan. Stripped of citizenship and stigmatised, the people living in the informal settlements have been nearly forgotten amid Sudan's revolution and economic challenges. A solution for their situation is yet to be brought up by the Transitional Government of Sudan.

Many people in the displacement sites lack ID cards or birth certificates because of their uncertain legal status. This means they are more susceptible to the financial shocks ripping through Sudan. More than 250,000 people are experiencing extreme food shortages in Khartoum.

It gets harder by the day for refugee families to secure food. Apuk, along with almost 6,000 other refugee and internally displaced families in Khartoum and South Kordufan, receives cash-for-food from the Norwegian Refugee Council (NRC), thanks to the support from the European Union.

The programme helps refugees buy food – giving priority to households at risk of malnutrition which include pregnant or breastfeeding women, families with more than three young children, and people who have a chronic illness. Each household member receives 5,500 Sudanese pounds per month for four months, which is equal to about 12 US dollars in July 2021.

“The money makes us happy,” Apuk exclaims. “It was the only time since 2013 that every kid had breakfast. They ate until they were full. We did not have to wonder what we would be eating tomorrow.”

In 2010, the UN refugee agency (UNHCR) set up a voluntary repatriation programme for southern Sudanese people living in Khartoum to travel to their new country. More than 200,000 travelled to assembly points for their journey to a new country.

From 2010 to 2013, around 70,000 people gathered at assembly points and were transferred to South Sudan by air and bus, according to UNHCR. But because there were so many who wanted to relocate, the process took years. And in 2013 South Sudan’s conflict left people like Apuk stranded because it was not safe to travel.

The departure points across Khartoum have gradually evolved into nine displacement sites where South Sudanese people now live as refugees in poor conditions, and receiving irregular aid. The departure points went from sites of hope for a new beginning, to despair and endless waiting.

The entrance to the displacement site where Apuk lives, on the outskirts of Khartoum, is marked by a sand barricade. When South Sudanese refugees first arrived here, they built their own homes out of the only resource they had – mud. As a result, the settlement is a maze of browns. At night there is no electricity.

South Sudanese refugees have lived here for years, and their struggle to gain proper identification prevents them from joining the formal labour market. Many have been unable to continue their education and have been pushed to work in Sudan’s unregulated shadow economy. Those who do cross these obstacles are left to battle with social stigma when applying for jobs.

With limited jobs available, men in the settlement travel to distant locations in Khartoum to find daily labour. The risk of exploitation and sub-standard working conditions is great. The days are long, and the pay is meagre. Many women clean houses in the host community neighbourhood. Other women sell food or handcrafted products inside the settlement.

“We cannot just sit around waiting to be handed food,” Apuk says. “Our children will become weak and malnourished. We have to find a way to feed the kids.”

Apuk believes it’s important to keep the cash she receives from running out. She plans to spend a portion of it on goods to sell inside the camp to earn a little income.

Currently, NRC is providing legal support for refugees in the open areas so they can join the formal labour market and get better access to education.

Khamisa, a 70-year-old community leader in the open areas, wants to make baskets.  “If the women get the proper handcraft training, we can work together to produce in bulk and sell in the market,” she says.

“If I’d had the proper education, I would never have stayed here. I would have loved to be of real value to my community outside of this complicated situation.”