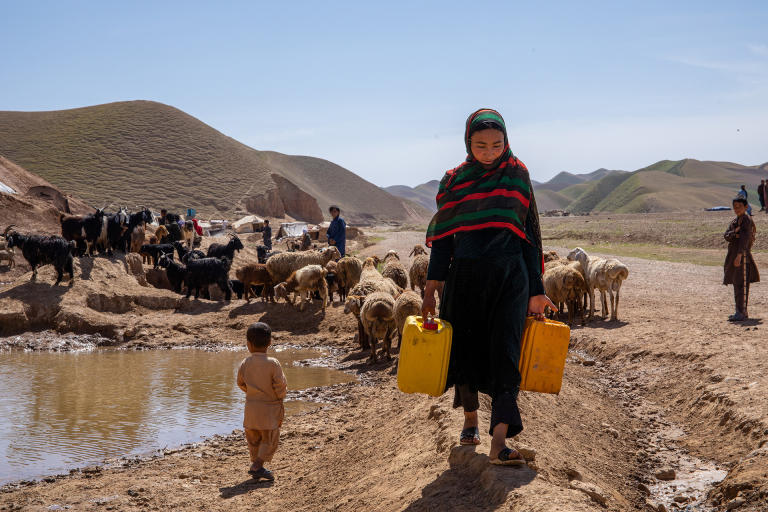 Roald Høvring Published 10. Jun 2021
Afghanistan Climate change
Read caption In this area of Sinjitak settlement, people and cattle drink from the same rainwater pond. This is their only source of water and the pond is starting to dry up. Photo: Enayatullah Azad/NRC
Time is running out for more than three million Afghans likely to be acutely affected by drought this year. The looming crisis comes on top of an already critical situation in Afghanistan, with worsening conflict and severe socio-economic impacts of Covid-19.

“This year's drought will be the final straw for millions of Afghans struggling to survive after decades of conflict and more than a year of the Covid-19 pandemic,” says Astrid Sletten, Norwegian Refugee Council (NRC) country director in Afghanistan. “Memories of being uprooted from their homes due to lack of water during the 2018 drought are still fresh in the minds of hundreds of thousands of people in the country.”

More than 12 million Afghans – one-third of the population – now face 'crisis' or 'emergency' levels of food insecurity. This situation places Afghanistan among the top three countries with the highest number of people in emergency food insecurity globally. The number of people affected already exceeds levels seen during the drought in 2018, according to a new NRC briefing paper: Running out of time – A looming drought in Afghanistan. Three million people in the north and western provinces of the country face particularly dire consequences of the drought due to their reliance on farming.

"The sky has stopped raining on us, the earth has stopped growing grass for us, and the government has also stopped helping us," says Abdul Baqi, 67. He was forced to leave his home during Afghanistan's previous drought and he fears what will happen in the coming months.

Now he lives with his family in Shamili Darya, a settlement for displaced people in provincial city Qala-e-naw, Badghis.

Afghans living in the worst-affected areas are already preparing for the full impact of this year's drought, having lived through the last one in 2018. Many told NRC of having to sell off their livestock and household assets, even as prices for these were in freefall.

“We found out that it will be a hot summer again that will burn all the crops and grass. I sold my goats and paid off some of the debts. I kept one of the goats as my wife has just given birth to our fourth baby boy,” says Abdullah, 35.

He is one of the newly displaced people in provincial Qala-e-Naw city of Badghis. The province is once again facing drought and families like Abdullah’s, who had just returned to their villages last year, had to flee again for the second time in the past three years.

The 2018 drought forced many people to borrow money and move to displacement sites to survive, as their fields dried up and livestock died from a lack of food and water. Many people reported feeling left behind, and few received aid.

Running out of time

Aid organisations on the ground have learned from previous experience how to support people where they live to prevent displacement, while helping those who need to leave their homes to stay alive. Yet, we are running out of time to prepare because of limited funding and ongoing conflict. Halfway into the year, the humanitarian response plan for Afghanistan is only 16 per cent funded.

“Afghan authorities must take leadership of the response and ensure that we can meet the needs of those most vulnerable,” says Sletten. “This is a preventable disaster. If we have the funding to prepare ahead of time, and the support of local and national authorities, we can help prevent countless Afghans from being hit hard by drought again.”