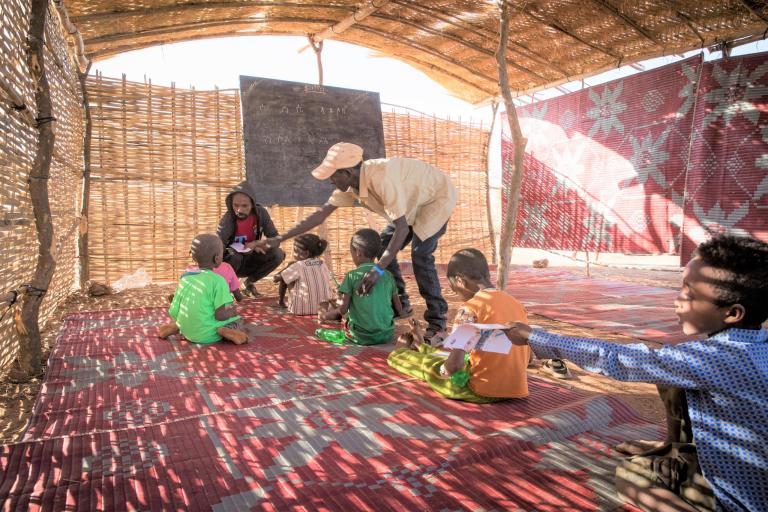 
Our supporters are part of something special in Sudan

Kristine Grønhaug Published 26. Jan 2021
Sudan Donors and partners
Read caption In just a few days, NRC in Sudan established a school for 700 children in Um Rakuba refugee camp, 70 kilometres from the Ethiopian border. Photo: Ingebjørg Kårstad/NRC
In Sudan – where 13 million people now need help – we have the chance to do something completely unique. All thanks to our donors.

The money that NRC’s regular donors contribute is flexible, which makes it especially valuable for our humanitarian aid work.

Here is just one example:

“In order to set up temporary schools in an active refugee emergency in Sudan, humanitarian aid organisations have to go through bureaucratic application processes sometimes lasting several months. But we can set up and staff a school in a refugee camp in just a few days,” explains Will Carter, 34, who leads the Norwegian Refugee Council’s (NRC) work in Sudan.

In Sudan for a second time

Sudan is the world’s fifth-largest humanitarian crisis. This year, at least one in four people in the country will need help. That’s about 13 million in total, including 2.5 million people who have been forced to flee their homes within the country because of conflict, and over a million refugees.

We can set up and staff a school in a refugee camp in just a few days
Will Carter, NRC

This is the second time NRC has worked in the country. In 2009, we were one of 13 humanitarian aid organisations that then-dictator Omar al-Bashir expelled from Sudan. “We had to stop our work of helping hundreds of thousands of displaced people, and we had to dismiss hundreds of humanitarian aid workers,” says NRC’s Secretary General, Jan Egeland.

Some other humanitarian aid organisations remained. But they had to work within a cumbersome bureaucratic system for many years.

Some semblance of normal life

The people who have fled conflict and brutal violence to Sudan are surprised to see classrooms quickly built where they have settled. For displaced children and parents, a school means so much.

“These children may have seen things that children should never see, such as extreme violence,” says Carter.

“They may have lost one or more family members. They have been forced to flee their homes, and now they are living in a strange and uncertain place. It is touching to see how happy they are when they get into a school. It gives them back some semblance of normal life.”

These children may have seen things that children should never see, such as extreme violence
Will Carter, NRC

A rich country with challenges

NRC returns to Sudan with fresh perspectives and novel methods. With some flexible funding and greater freedom to act, we can also indirectly help other humanitarian aid organisations improve their operations too, such as better using approaches that support the local economy or are more accountable to the people we’re all trying to serve.

Will Carter, who joined NRC in 2015, came to Sudan in September last year. He speaks Arabic, which comes in handy in a country where 70 per cent of the population are Sudanese Arabs.

For more than 100 years, both as a colony and as an independent country, Sudan also included what is now South Sudan. At that time, Sudan was Africa’s largest country. The southern part became an independent state in 2011.

“To me, Sudan is a meeting point between the Arab world and the great African continent. It is diverse, with many different cultures and riches, but there are also huge challenges – such as a terrible and until recently sanctioned economy, and the challenge of trying to preserve a fragile peace process,” says Carter.

In August 2019, a transitional government took over from the military council that had ruled the country since al-Bashir was ousted in April.

Then, NRC was welcomed back to Sudan.

An appeal to the world

The country currently hosts over a million refugees from South Sudan, Eritrea, Chad, Yemen and Syria. Since November 2020, people have also been fleeing to Sudan from the violence in Tigray, Ethiopia.

Just before Christmas, Jan Egeland visited some Ethiopian refugees who had found safety in Sudan:

Watch a video from his visit

Read more about his visit

In Darfur, a region in the west of the country that has been plagued by brutal violence and conflict since 2003, violence has recently resurfaced after the United Nations–African Union Hybrid Operation in Darfur (UNAMID) withdrew a few weeks ago. As of 22 January, 270 people had been killed, 483 had been injured and 110,600 had been forced to flee their homes, according to UNHCR.

Jan Egeland said that he feared the recent events could mean a “return of the ugly face of war in Darfur”. His appeal to the world is that “international support must not fade” and that “humanitarian aid and protection should again be scaled up”.

NRC’s main office is located in the capital Khartoum, in the middle of the country, where the Blue Nile meets the White Nile.

He explains that flexible funding allows NRC to go beyond emergency aid. It enables us to be strategic and focus on more neglected areas as well.

Thus, we have been able to begin exploring options for legal assistance with regard to land rights and property to people who have returned home after being displaced for over a decade. We have invested in new technology and equipment to help communicate with people and easily transfer them monies so they can meet their basic needs and boost the local economy.

“We are grateful to all those who have supported us. Without flexible funding from our private donors, we would not be where we are now. Now, we can act quickly. Now, we can give people who live in a complex country genuinely effective help.”