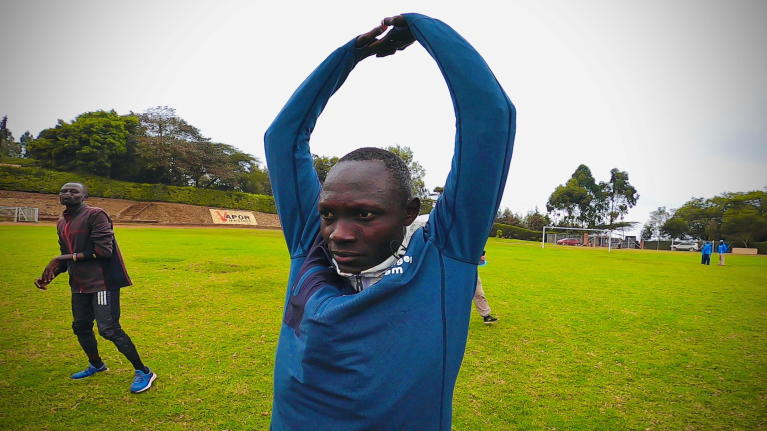 Had to run for his life in South Sudan


Now, he is running for a medal in Tokyo Olympics

Roald Høvring Published 26. Jul 2021
Read caption PAULO AMOTUN LOKORO in training. As a 12-year-old, he ran for his life. Now, he is part of the IOC Refugee Olympic Team and is running for a medal in the Tokyo Olympics. Photo: REUTERS/Jackson Njehia/NTB
As a 12-year-old, Paulo Amotun Lokoro, now 24, had to run for his life. Since then, he has lived in a refugee camp in Kenya. In a few days he will be running for a medal at the Tokyo Olympics.

In 2006, Paulo tended the family’s cattle while violence ravaged his troubled home district. Five years later his home became part of the new state of South Sudan and Paulo was forced to run for his life.

He ended up in Kakuma refugee camp in neighbouring Kenya. Here he was first reunited with his mother who had fled two years earlier. Three years on, his father would also arrive at the camp.

From refugee camp to Olympic squad

Life as a refugee was not something that Paulo chose, but he has tried to make the best of the situation.

“I realised early on that I had a talent for running, and for me, running became a way to cope with everyday life. But participating in the Olympics was not something I walked around thinking about,” he says in a recent video.

This changed when the UN refugee agency (UNHCR) took the initiative to form the Refugee Olympic Team (ROT), with the hope that, among other things, it would draw attention to the plight of displaced people.

In the Rio Olympics of 2016, a squad consisting of ten athletes with a refugee background participated under the orange refugee flag for the first time. Paulo was part of the squad. In Tokyo, he is back with 28 other athletes who were forced to flee their home countries.

Eirik Christophersen, a media adviser for NRC, remembers the Rio Olympics as a very positive experience. He thinks the initiative is a good way to create awareness about the world’s refugee crises.

“These athletes tell moving stories. And, unfortunately, they are quite representative of how displaced people feel,” he says.

There are many who have similar stories. At the turn of the year, there were as many as 82.4 million displaced people around the world. One third of them are refugees who have fled to another country, while two thirds are displaced within their own country.

“Another negative trend is that people are living as refugees for an increasingly long time,” continues Christophersen. “There are adults who have lived their whole lives as refugees.”

“Many children, like Paulo, grow up in refugee camps, where they have few opportunities to receive an education,” says Christophersen. Only three per cent of the world’s refugees go to university or take higher education.

“Most of the world’s refugees are in poor neighbouring countries that are unable to provide education to young people. Consequently, these refugees are excluded from important areas of society, and struggle to become integrated,” explains Christophersen.

“Many desperate families and single refugees are therefore forced to embark on life-threatening journeys in search of a safer and better future.

“We know that investing in education and safe spaces where children and young people can participate in recreational activities is one of the most profitable things we can do. In addition, it gives people hope for the future.”

Last year, we ensured that more than 1.1 million children and young people received help with education.

Proud athletes at the starting line

“We represent all the refugees in the world, and I am both happy and proud to be able to run on behalf of displaced people,” says Paulo.

On Tuesday 3 August, he will line up at the starting line in the Japanese capital.

Below, you can read more about some of the 29 refugee athletes participating in the Tokyo Olympics.

As a 12-year-old, Tachlowini Gabriyesos fled his home country of Eritrea. At the Tokyo Olympics, he is part of the IOC Refugee Olympic Team, running for a medal. Read how we provide aid and protection to refugees like  in Ethiopia.

Yusra Mardini fled the war in Syria in 2015 and had to swim for three hours to save her life off the Greek island of Lesvos. At the Tokyo Olympics, she represents the IOC Refugee Olympic Team and will be swimming for a medal. Read more about how we provide aid and protection to refugees such as Yusra in Syria and neighbouring countries.

Afghan Masomah Ali Zada loves cycling, but violence in her homeland and negative attitudes towards women’s participation in sports forced the family to seek asylum in France. As part of the IOC Refugee Olympic Team, she will be fighting for a medal in the Tokyo Olympics. Read more about how we support displaced girls in Afghanistan.

Luna Solomon fled from Eritrea to Switzerland in 2015. As part of the IOC Refugee Olympic Team, she will be fighting for a medal in the Tokyo Olympics in the women’s 10 metre air rifle competition. Read more about how we provide protection and assistance to young refugees like Luna in Ethiopia.