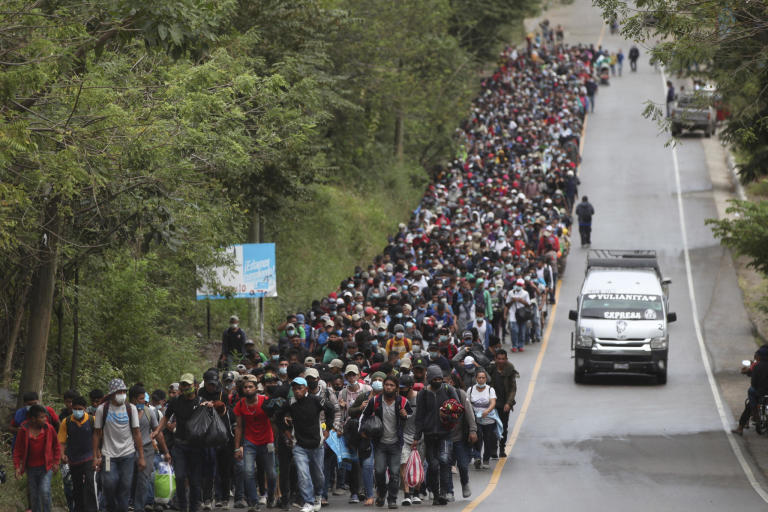 
Hondurans are forming caravans and leaving their country

Roald Høvring Published 20. Jan 2021
Honduras Migration
Read caption Honduran migrants hoping to reach the US border walk alongside a highway in Chiquimula, Guatemala. Photo: AP/Sandra Sebastian/NTB Scanpix
A new caravan of 7,000 migrants from Honduras is aiming to reach the United States, where many hope to get asylum.

The first migrant caravan of the year is aiming to reach the US, where many hope new president Joe Biden will be more welcoming to asylum seekers than former president Donald Trump, with his hardline anti-immigration policies.

More than 7,000 Hondurans are making their way on foot across Guatemala towards Mexico. Many are fleeing violence and economic hardship, which have been made worse by the Covid-19 pandemic and recent deadly storms.

Guatemala, Mexico and Honduras have an agreement with the US to stop north-bound migration routes. They have deployed thousands of soldiers and riot police aimed at blocking the passage of migrant caravans.

Guatemala has set up almost a dozen control points on highways and may start bussing migrants back to Honduras, as it has done before – arguing that they pose a risk to themselves and others by travelling during the coronavirus pandemic.

We are hearing from people on the ground that many Hondurans plan to take Covid-19 tests, to comply with the requirements and get back en route as soon as possible.

The Norwegian Refugee Council (NRC) works to support refugees and displaced people in over 30 countries around the world, including Honduras. Support our work today

Here are nine reasons why Hondurans are forming caravans and leaving their country:

Many Hondurans are suffering from the aftermath of two violent tropical storms that hit the country last November, and hundreds of thousands are still waiting for humanitarian aid. Many people are still living in temporary shelters – under bridges, by the sides of roads, or in makeshift settlements.

According to UN Disaster Assessment and Coordination (UNDAC), nearly half of the 9.3 million people in Honduras were affected by storms Eta and Iota. According to data from the country’s authorities, more than 1,000 shelters have been set up nationwide to accommodate 95,000 people, many of which lost their homes. More than 85,000 houses were damaged and 6,000 were completely destroyed.

The negative economic effects of the pandemic have triggered a steep rise in unemployment and poverty in Honduras.

Covid-19 prevention measures have caused significant loss of income and assets among the population. As a result, many Hondurans are struggling to cover their basic food and health needs. In addition, recent flooding has damaged 216,000 hectares of crops, and levels of food insecurity are rising, according to UN OCHA.

The ongoing threat of criminal violence complicates the crisis. Gangs have been extorting people trying to reach safety or go back home.

Humanitarian access has been restricted in certain communities due to the presence of armed gangs. The Norwegian Refugee Council (NRC) has even had to evacuate people from emergency shelters because of the risk of sharing a space with gang members who may have been involved in their original decision to flee.

#4: Millions in need of humanitarian assistance

The recent events have come on the back of an existing, growing and neglected humanitarian crisis, and needs are at unprecedented levels.

Even before the pandemic and the storms, the United Nations found that 5.2 million people were in need of humanitarian assistance across Honduras, El Salvador and Guatemala due to chronic violence, food insecurity and displacement. Covid-19 lockdowns have since paralysed local economies and health systems.

Forced migration in Honduras is by no means a new phenomenon. Even before the latest storms, violence and food insecurity had forced many people to flee their homes. One year ago, an estimated 190,000 Hondurans were internally displaced within the country’s borders, according to IDMC.

The recent storms highlight how the changing climate is affecting this region. Major hurricanes in the Atlantic basin during November normally form every seven to eight years, making Eta and Iota’s occurrence within weeks of each other a historical event. The 2020 season closed as the most active hurricane season ever recorded.

#7: Neglected by the international community

In 1998, the world came to the rescue of Honduras and Nicaragua in the wake of Hurricane Mitch. Now, 22 years later, Eta and Iota have caused similar devastation, yet this time the region has been neglected by the international community and donors.

NRC has called for donors to recognise the growing needs and fund the UN’s appeal for the storm response. By 19 January, the appeal was 29 per cent funded. We have also been calling on the humanitarian community to step up by developing a response plan and scaling up its assistance.

The migrants in the caravan hope that US immigration policies will change and become less strict under the new president, Joe Biden.

Every year, tens of thousands of Central American migrants attempt this perilous journey to try and reach the US, often on foot. President-Elect Joe Biden has vowed to end to the strict immigration policies of his predecessor, Donald Trump. But the Biden administration, which will take office on 20 January, has warned migrants not to make the journey, as immigration policies will not change overnight.

More than a dozen similar groups, some containing thousands of migrants, have set off from Central America in recent years. One of the largest came from Honduras in October 2018.

While Central Americans have been fleeing their homelands for the US for many years, and have sometimes joined forces along the way, the organised nature of these recent caravans is relatively new.

Migrants are often kidnapped by people traffickers and drug gangs, and forced to work for them. A large caravan is harder to target and therefore offers more protection.

Read more about how families are fleeing for their lives in Central America.