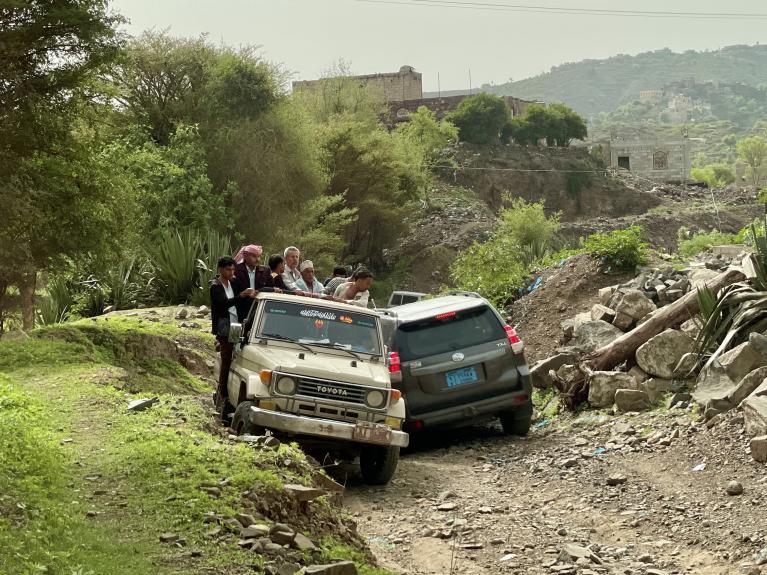 Jasmin Lavoie Published 01. Sep 2021
Yemen Humanitarian access Security
Read caption Photo: Jasmin Lavoie/NRC
We are about to arrive in Al Mocha, a historic port city on Yemen’s Red Sea coast. The road is paved, straight, and empty. The sun is setting, and the wind is driving the desert sand into our path.

Then, on the horizon, we see rocks on the ground. A sign here that we can’t move further. An airstrike has partially destroyed the bridge ahead.

Like most major cities in Yemen, Al Mocha has witnessed its share of bombs since the violence here escalated in 2015. Formerly a prosperous trading centre exporting coffee and dates, the port of Al Mocha is now a strategic military point. This is due to its proximity to the Bab Al Mandab Strait – a critical thoroughfare for world trade, with up to 30 per cent of the world’s oil shipped through its waters.

Al Mocha was first taken by Ansar Allah, also known as the Houthis. Then, in 2017, it was taken over by the military coalition led by Saudi Arabia and the UAE. During the clashes, all sides indiscriminately bombed some of Al Mocha’s most vital infrastructure – strategic roads, bridges, power plants, health clinics, and schools.

I am traveling here as part of my work for the Norwegian Refugee Council (NRC). NRC provides humanitarian aid across the country. Our teams build solar water pumps and latrines, rebuild schools and support unpaid teachers, provide cash so families can buy food and pay their rent, and construct basic shelters to help some of the four million displaced people scattered across Yemen.

NRC works to support refugees and displaced people in over 30 countries around the world, including Yemen. Support our work today

These displaced communities and families are some of the most vulnerable and remote communities in the country.  Many have been forced to flee by violence during the last six years, while others have fled more recently because of floods. We support people from the Muhamasheen community, a marginalised group in Yemen, as they return to areas close to the conflict frontlines. We also help students whose schools have been bombed.

My job is to let the rest of the world know what is happening here on the ground by telling stories like this one.

Driving through a minefield

On the way to one of our projects, at the Al-Yaqadha school on the city’s outskirts, we discover a minefield surrounding the road. Red and white painted stones indicate the safe route through. Above all, it is vital to avoid straying onto the red side.

This time, we are on a well-marked road, but sometimes things are not that clear. According to the United Nations, more than 263 landmines and unexploded ordnance incidents were reported between January and June 2021, across 49 different districts.

But little remains of the original Al-Yaqadha school except an enormous pile of rocks on the ground. An airstrike destroyed the building. Everything had to be rebuilt: classrooms, solar panels for electricity, and toilets.

Meanwhile, to get to our other “hard-to-reach” projects, we must find ways to get around these hurdles and some of the 50 frontlines in Yemen, which block many of the main roads.

From Al Mocha to At-Thurba, from At-Thurba to Taiz: south-west Yemen is full of alternative routes through the mountains. These tend to be narrow, rocky and steep, and are mostly only accessible to 4x4s and trucks, or sometimes, donkey carts – all vying for the same space. A terrifying prospect, considering the number of narrow bends and blind turns on the roads.

After hours travelling through these mountains, we finally reach Al Selw, a few kilometres away from an active frontline. We have gone from a desert to a mountaintop, but the scenery looks similar. Houses, roads and schools are destroyed.

We visit one of the houses that our teams have rebuilt, then another one that was destroyed by an airstrike that killed nine members of the same family.

The chief of the district, who joins us for part of the trip, would like NRC to rebuild this house, and many others. But it’s not that simple – partly because access is difficult, but also because funding is difficult to obtain. It is hard to convince donors to rebuild a school or houses close to a frontline in the heart of a war, the outcome of which is uncertain.

I only arrived in Yemen two months ago. This field visit was my first one. I am no expert on Yemen – there are many parts I haven’t visited. All I can write about is what I see, feel and hear.

According to my colleagues, access for humanitarian organisations has deteriorated steadily in Yemen over the last two years. This is because of fighting and shifting frontlines, destruction of roads and bridges, and the physical challenges of the terrain that I’ve already described. But it’s also because of bureaucratic obstacles and red tape imposed by authorities.

As humanitarians, we have movement restrictions imposed on us by the groups that control different parts of Yemen. We experience long delays in setting up our projects, and attempts to interfere in our programmes.

My humanitarian colleagues are already facing many access challenges daily. In a country where two thirds of the population now need some form of humanitarian assistance, it would be good to lighten their task.

We need rapid access to the field and the lifting of all obstacles so people can get the aid and assistance they need. All sides must agree a ceasefire and find lasting political solutions to guarantee peace in Yemen.

Meanwhile, we will continue despite the challenges, because for so many Yemenis, aid is a matter of survival.

Read mroe about our work in Yemen