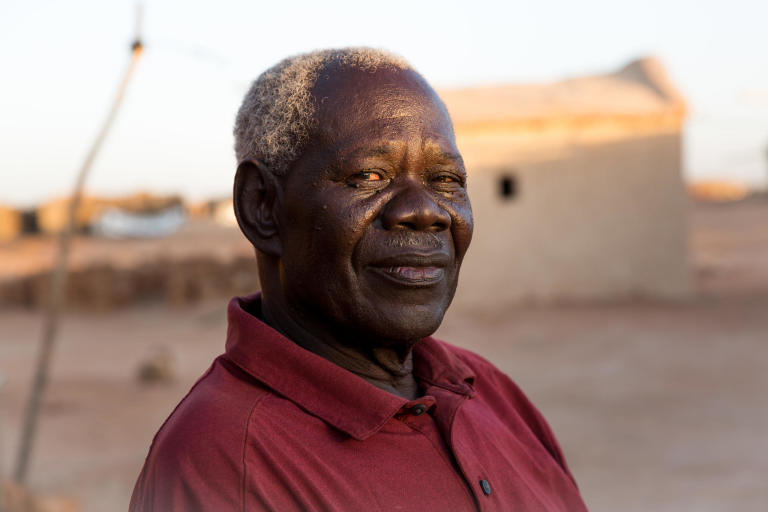 Catriona Loughran Published 09. Feb 2021
Sudan Livelihoods and food security Humanitarian policy
Read caption Anglo Woku, 78, suddenly found himself living in a legal limbo when South Sudan gained its independence in 2011. Photo: Ingebjørg Kårstad/NRC
Anglo Woku never imagined he would be living as a refugee in Sudan in his twilight years. Especially since he left the southern part of the country for a better life almost 50 years ago.

“I escaped in 1969, shortly after the civil war broke out. I ended up in Khartoum. I was working for the military. I was married, had a family and friends. Sudan gave me a good life,” he said.

The conflict between north and south raged for 22 years until a peace agreement was brokered in 2005. Then in 2011, the people of the south voted for independence and South Sudan, the world’s youngest nation, was born.

“I lost my Sudanese identity”

This new dawn, however, caused all sorts of legal uncertainties for the South Sudanese living in Sudan, particularly in the years following independence.

“I lost my Sudanese identity,” Anglo, 78, explains. “I went from being a public servant to a refugee.”

After South Sudan became independent, Sudan passed new laws. People with southern heritage automatically lost their Sudanese nationality and were now considered South Sudanese. Even their children, despite being born and raised in Sudan, were given a new nationality.

Many people had no intention of moving to South Sudan, a country largely unknown to them. Others decided to return to their new homeland.

As part of a programme of organised returns, those willing to repatriate were assembled at departure points. However, in 2013, conflict erupted in South Sudan and the operation was put on hold, leaving thousands of South Sudanese in limbo.

The Norwegian Refugee Council (NRC) works to support refugees and displaced people in over 30 countries around the world, including Sudan. Support our work today

Anglo is among those languishing in an Open Area with no rights and no access to a decent standard of living.

“I found myself jobless and homeless with no rights or identification, and I have been here ever since,” he explains.

Fondly known as “the Sultan”, the name given to well-respected leaders in the community, Anglo went from the upper echelons of Sudanese society to being exiled to a dusty, flat land called Nivasha on the edge of Khartoum’s city limits.

I did not want to become a refugee. I worked hard as a citizen, but then this happened.
Anglo Woku

Anglo and thousands more live an invisible existence here, hidden from the rest of the Sudanese population who struggle on with life in a country buckled by years of oppression, debt, corruption, sanctions, drought and humanitarian chaos.

“I did not want to become a refugee,” he says. “I worked hard as a citizen, but then this happened. My children have moved back to South Sudan, but my wife is here. My children have jobs and they are safe. We had planned to move back there but there is no way out now. I have no money and we are stuck here.”

Like many others, Anglo is a trapped in an administrative quagmire that no organisation has the funding, capacity or support to resolve. The Commission for Refugees is dealing with a backlog on registration – and access to documentation remains a challenge for all unregistered refugees.

“We are constantly hungry”

We met Anglo and other South Sudanese refugees on a recent trip to Nivasha settlement.

The winter sun was setting as we arrived, painting a golden hue over this forgotten community.

Terracotta-coloured cuboid homes line the streets. Curious heads peep out from glassless windows of makeshift shops, indicating some market infrastructure but nowhere near enough to serve the population.

Overburdened donkeys carry the only available water to the residents. There is limited electricity, and food scarcity plays constantly on the minds of mothers desperate to feed their growing children.

We are constantly hungry. I have never known hunger until I came to these settlements.
Apuk

“There is no food,” 70-year-old grandmother Apuk told us. “We are constantly hungry. I have never known hunger until I came to these settlements.”

A handful of local agencies including the World Food Programme offer humanitarian assistance to the 11,000 inhabitants of the settlement. But there are virtually no income-generating activities to provide a way out of a reliance on aid.

As a result, many residents venture into the nearest neighbourhoods or markets in search of work. Men typically find casual labour while the women find cleaning or housekeeping jobs.

“My daughter, when she gets work, provides around 50 Sudanese pounds per day [less than 1 US dollar]. If we get money, we get a meal once a day. But if she finds no work, we have to search for food in the night to ensure the children get something to eat,” Apuk says.

“We often come home with nothing.”

As in many vulnerable communities around the world, the Covid-19 pandemic has had a crippling economic effect on the people here, who are mostly reliant on daily labour wages.

Restrictions and lockdowns forced the nearby city to close and dried up the only work opportunities available.

With no adequate health or sanitation facilities, Nivasha is defenceless against coronavirus and other diseases. And if anyone is sick, there is no ambulance to take them to a hospital. The nearest hospital is miles away and the only way to travel is an expensive taxi or motorbike ride.

There are many women here that are farmers. They know what to do.
Anglo Woku

With the recent inflation rate, food has also become more expensive. Everything is expensive in economically fragile Sudan. And as Anglo points out, people need more than subsidies to be able to eat, they need opportunities.

“This land is good. It could be productive for food with the use of small backyard land, but the community does not have the support to start food production activities,” he explains.

“If they had their own vegetables, they could eat them and sell them. There are many women here that are farmers. They know what to do. They would like to start farms or shops.”

“We just want to feel settled”

Apuk reveals that she grew up on a farm in South Sudan and remembers her young life well.

“We had a good life. We had food, plenty to eat. We were fishermen. I miss the taste of fish, I used to eat it every day,” she smiles.

“I feel safe in Sudan but I just want my children to eat. I want them to have some life. I am old but they are not. I have lived and worked in Sudan, but I would like my community to live better.”

Anglo admits life has not turned out the way he expected, but he finds comfort in the many friends he has made in the community. As he talks, several men of various ages gather around him in a brotherly circle.

“He is a good man,” says George Allam Lolika-Khalil, the “Sultan” of another camp. “He cares for the community. He tries to make things right for us, especially the children.”

Anglo believes that with the new democratic government, Sudan has the potential to grow. But he would like to see the refugee community better served and no longer forgotten.

“If they don’t provide livelihood opportunities or training, we will just waste away. We are now known as refugees but many of us have lived here all our life and we just want to continue living without struggling,” says Anglo.

“We just want to feel settled in the country we have always called home.”