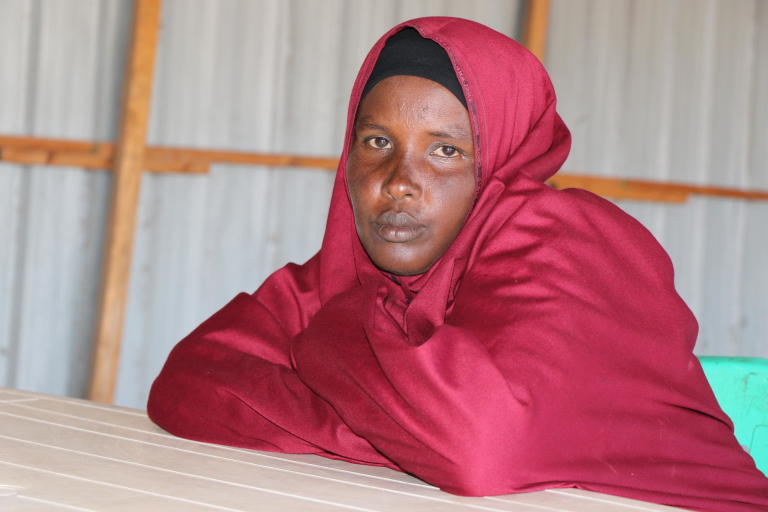 
Khadija has justice at last

Abdulkadir Abdirahman Published 09. Jun 2021
Somalia Gender Information, counselling and legal assistance (ICLA)
Read caption Khadija Ahmed Ali, 48, at a legal aid clinic in Kismayo supported by NRC and funded by FCDO. Photo: Abdulkadir/NRC
When Khadija Ahmed Ali, 48, suffered an assault, she didn’t know who to turn to. The legal services in the camp where she lived were inadequate and unclear. But a new legal aid clinic, set up by the Norwegian Refugee Council (NRC), has transformed her life and the lives of many other camp residents.

Khadija lives with her nine children in Jabuti camp, in the Lower Juba region of southern Somalia. She and her family were forced to flee by the 2016 drought that devastated their livestock. They have been living in Jabuti camp for the past five years.

"Before NRC’s legal aid centre there was no specific place or any sort of guidance for the displaced communities to help them with legal services,” says Khadija.

“In the camps, conflicts, disputes, and sexual and gender-based violence (SGBV) cases are very common and can happen at any time, but getting legal assistance used to be very difficult. These negative practices have become accepted by the residents because you do not know what to do or where to go for help.”

NRC works to support refugees and displaced people in over 30 countries around the world, including Somalia. Support our work today

The stigma of assault

“Sometimes, it is difficult to share your problems publicly. The reason is that there is lack of understanding about the legal system here, including about law and order authorities such as the police, and also about where to go to report your case,” she adds.

There are enormous social and cultural barriers to reporting SGBV cases in the displacement camps, compared to other types of case. Survivors are often reluctant to pursue their cases due to social stigma.

Legal assistance is essential in order to promote and increase access to justice. If justice is absent, vulnerable individuals like Khadija are unable to make their voice heard, exercise their rights, challenge discrimination or hold decision-makers accountable.

In 2020, NRC set up a legal aid clinic in Jabuti camp. The clinic was one of several activities implemented under the Danwadaag programme, which aims to provide lasting solutions for camp residents.

“
After several meetings and a mediation, my case was finally resolved and I can say I got justice
Khadija, 48

The clinic has ensured that displacement-affected communities receive specialised counselling and legal assistance in several areas, including civil documentation and housing, land and property rights. It has made a huge difference to Khadija and the other camp residents, who now have better access to legal services, including collaborative dispute resolution. The clinic helps to ensure that the delivery of justice in the camp is impartial and non-discriminatory.

“I’m one of the people who have benefitted from legal aid,” reveals Khadija. “I had an unresolved assault case and I wanted to report it, and then I came to this clinic. I was received by NRC staff, interviewed, and given guidance on free legal services.

“Initially, I reported my case to the dispute resolution committee, but we were unable to reach a final decision. I think they tried their best but they were unable to resolve the matter. After several failed attempts to close the case, it was referred to the police station, who then referred us to the district court.

“However, when I heard about this new legal aid clinic, I reported the matter to the NRC staff at the clinic and – praise be to God – after several meetings and a mediation, my case was finally resolved and I can say I got justice.”

The Danwadaag (meaning common purpose) Durable Solutions Consortium is a three-and-a-half-year programme supported by the UK’s Foreign, Commonwealth and Development Office (FCDO). It aims to enhance progress towards durable solutions and (re-)integration for displacement-affected communities in specific urban centres in the Banadir, South-West State and Jubaland regions of Somalia.

The programme is delivered through a consortium approach led by the International Organisation of Migration as the lead implementing agency, Concern Worldwide and NRC as implementing partners, and the Regional Durable Solutions Secretariat (ReDSS) as the learning and knowledge partner.