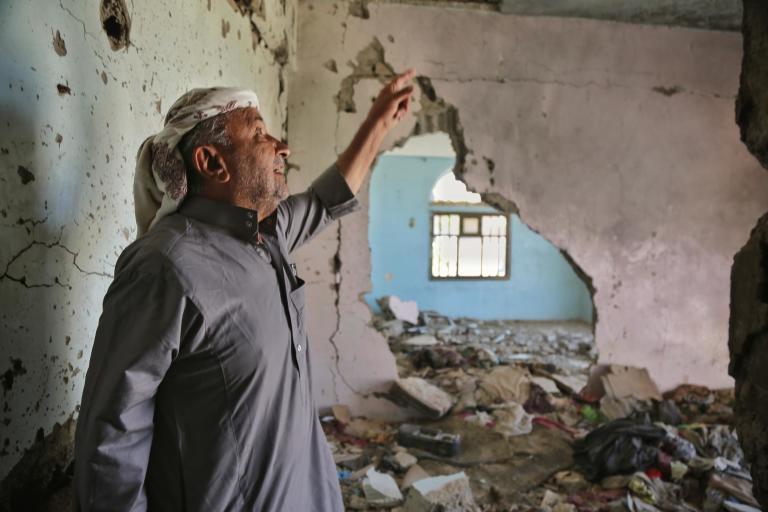 
Inside a besieged city: a life left in ruins

Nasser Abdulkareem Published 24. Mar 2021
Yemen Cash and voucher Shelter and settlements
Read caption Abdullah Hasan Al-Shara’ai, aged 65, points out the extensive damage to his home in Taiz city. He used to rent out part of this house for an income, but is now struggling to pay his own rent. Photo: Khalid Al-Banna/NRC
Once a prosperous city affectionately known as Yemen’s Capital of Culture, Taiz today is in ruins. Former homes stand derelict and empty along the once-peaceful streets.

Not so long ago, 65-year-old Abdullah was a comfortable landlord, renting out most of his two-storey house in the old neighbourhood of Al-Zahrah. Now he and his family are sheltering in two rooms in a disused hotel, unable to return home.

“I fled with the clothes on my back,” he told us.

The Norwegian Refugee Council works to support refugees and displaced people in over 30 countries around the world, including Yemen. Support our work today

Abdullah is living in one of the deadliest hotspots in Yemen. The Taiz area has accounted for a fifth of all the civilian deaths in the country, and hospitals, schools and water networks continue to be hit. Abdullah’s own son broke his leg running from a bout of shooting, and will never again walk without crutches.

As terrible as that was, at least the family still had a home. But three years ago, the fighting hit their neighbourhood. Abdullah gathered his family and fled the familiar streets, leaving everything behind.

“Everything else can be replaced”

“We didn’t think about anything but fleeing,” he says. “Being alive was more important. Everything else can be replaced.”

Abdullah, his wife and three of their children took shelter in an empty hotel. Others who had fled the fighting occupied neighbouring rooms. An aid organisation gave Abdullah six blankets and six mattresses, which he says were a great help at that time.

When the fighting moved on to other areas of the city, Abdullah returned to check on his home.

He found it almost unrecognisable. Walls had been blasted right through from the outside, filling the rooms with rubble and letting in the wind and rain. A ragged hole had been torn in the ceiling.

Among the ruins, Abdullah found fragments of the shells that had struck his building. He showed them to us as we walked together through what was left of his home.

“Everything inside was destroyed,” he says. “I lost everything I had.”

Abdullah remembers what it was like to be a landlord with his own tenants. He says that when they struggled to pay their rent, he often allowed them to skip a month or pay a reduced amount. “I wasn’t tough on anyone. Those who had would give, and who didn’t would not.”

A father of ten children, the rent he earned was not enough to keep them in luxury. Abdullah sold water to bring in a little extra money. But, he says, “I was satisfied with my income. If you are satisfied with what Allah gives you, you will be the richest one.”

For the first six months, the hotel owner allowed the frightened guests to stay for free. Then the owner asked for rent. It was a shock for Abdullah to realise he had no way to pay. After everything they had been through, would his family now be turned out onto the streets?

Luckily, a new project helped to keep Abdullah’s family from the streets. A hundred families in Taiz city are now receiving financial assistance from the Norwegian Refugee Council (NRC) to find shelter, thanks to funding from the German government.

“This money will help us to pay the rent and buy rice, cooking gas and other basics for my family,” Abdullah tells us. “I thank NRC for that support.”

We lived in luxury

Safia Mohammed Saif also fled the Al-Zahrah neighbourhood, her life turned upside down by the war.

“We lived in luxury and comfort,” she explains. “Our home was built from marble. We had flush toilets and heaters. But everything was destroyed.”

Once, Safia travelled abroad on holidays with her husband. Now she cannot even pay rent for where she is living. “We are going to pay YR20,000 [equivalent to USD 28] of the money we received from NRC to the landlord and we will buy a plastic sheet to put on the ground,” she says.

Safia and Abdullah are facing more hard times ahead. The situation in Taiz city is deteriorating, with the fighting and shelling escalating again. There are civilian casualties reported almost daily, with yet more homes damaged and more families to forced flee.

But at least for now they have a roof over their heads, and a little peace of mind.