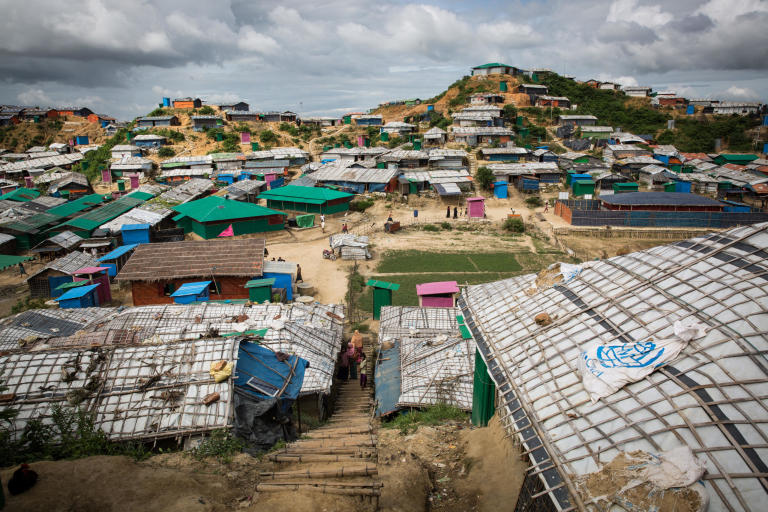 
“Home” no longer exists for many Rohingya

As Myanmar reckons with a new humanitarian crisis and deepening economic uncertainty since February’s military takeover, and as the entire region buckles under a third wave of Covid-19, the future of hundreds of thousands of Rohingya hangs in the balance.

NRC works to support refugees and displaced people in over 30 countries around the world, including Myanmar and Bangladesh. Support our work today

Rakhine State, where the Rohingya have lived for generations, has a history of ethno-religious violence. In 2012 and 2016, riots resulted in communities being displaced, with some people fleeing over the border to Bangladesh and other countries in south-east Asia.

Then, in August 2017, the violence peaked. The United Nations found that the Myanmar military had torched Rohingya villages, seized Rohingya land, and participated in widespread abuses and violations of human rights. As thousands of Rohingya sought refuge across the border in Bangladesh, the local community and aid agencies including the Norwegian Refugee Council (NRC) mobilised to address the acute needs of a traumatised population.

In the years that followed, the humanitarian community and the government of Bangladesh worked together on a community-led, participatory approach to assist refugees and the immediate host community.

The daily struggles of prolonged displacement are felt by the communities we serve in Bangladesh and Myanmar alike. In the world’s largest refugee camp, located in Cox’s Bazar, Bangladesh, Rohingya populations depend on NRC and other aid agencies for basic services including education, water and sanitation, and healthcare.

Yet, temporary settlements made of bamboo and tarpaulin deteriorate with each passing year. Children face barriers in accessing education. Older people, women and girls, and people with disabilities have specific vulnerabilities that require special attention. Increasingly, extreme monsoon rains cause landslides and floods along the camp’s many hills. As refugees have told us, this is not a forever home.

Little left to return to

While the hills of Rakhine are visible from Cox’s Bazar – a constant reminder of their old home just beyond the border – the safety and security of “home” may no longer exist for many Rohingya refugees.

For a start, many families have little left to return to. Across Rakhine, burned villages sit charred and empty. Farmlands in northern Rakhine have been cleared by the Myanmar military for redevelopment, mosques have been destroyed or closed, and ancestral homes demolished.

In other instances, property has been illegally seized or occupied by new tenants, or acquired for commercial use. A 2019 study by the Australian Policy Institute estimated that almost 40 per cent of Rohingya villages damaged in the 2017 violence had since been completely demolished. In Rakhine, NRC has documented cases in which families separated by the violence of 2017 have been deprived of their land.

The ability of Rohingya people to access housing, land and property rights in Rakhine State has been made even more challenging by two recent developments.

Since 2017, several laws have been amended which make holding onto land and property even more challenging for displaced people.

The revision to Myanmar’s 2018 Vacant, Fallow and Virgin Land Management law risks infringing on the cultural communal practices of some minority groups and restricting their access to livelihoods in rural areas. In doing so, it has created the potential for refugees to lose their rights to land in their place of origin and increased the risk that they will face penalties for using formerly abandoned land if they return to Myanmar. Legislative developments since February this year threaten new obstacles for humanitarian and development personnel wishing map and survey land.

In addition, there are ongoing barriers to obtaining basic identity documents or proving ownership or usage rights over land and property. The Rohingya population faces particular difficulties because of their inability to secure citizenship in Myanmar according to the discriminatory application of the 1982 Citizenship Law. This leaves legal loopholes regarding land ownership and usage, and increases risks of future abuse and denial of rights.

Without a home or land to return to, it is difficult to imagine how return could be feasible or sustainable for many Rohingya. Yet deeper issues must also be solved to enable those who may wish to someday return to do so.

Many are looking for assurances that violence and persecution will not be repeated. Others seek justice and accountability for the crimes that were committed. Access to legal identity and guarantees of citizenship rights will also be an important condition to ensure the atrocities of August 2017 are not repeated.

Rohingya rights must be protected

With the worsening humanitarian situation across Myanmar, there have been few signals that conditions in northern Rakhine will be more conducive for return anytime soon.

In November 2018 and again in September 2019, the Myanmar government issued calls for the more than one million Rohingya refugees in Bangladesh to begin returning to Myanmar. But each time, these calls came without material commitments to ensure rights. Although there is general agreement that it will take more than public calls for refugees to feel safe and confident enough to “vote with their feet”, the military takeover of 1 February 2021 has brought new uncertainty.

As we reflect on these past four years, there are two areas in which NRC looks to the international community for continued leadership to support the Rohingya in the absence of long-term solutions to their displacement.

First, international donors should continue to support Bangladesh in its hosting of 860,000 refugees and work to preserve asylum space. Neither the host government nor refugees themselves should be left alone to face the challenges of long-term displacement.

Second, the needs and preferences of Rohingya refugees should inform regional and global efforts for accountability and safe repatriation. The Association of Southeast Asian Nations (ASEAN) in particular should take a more active role in brokering a durable end to the crisis.

Four years after their expulsion from Rakhine State, the Rohingya are at risk of being forgotten by the world. But the crisis that has tragically defined them is not beyond resolution. Assessing and securing their rights to housing, land and property is an important step forward, and one that might pave the way for the Rohingya to secure lasting solutions to their displacement.

Read more about our work in Bangladesh

Read more about our work in Myanmar