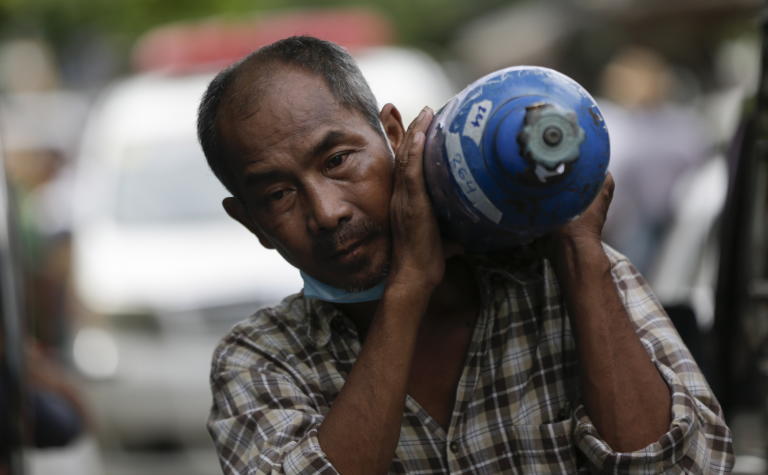 
Four warning signs that Myanmar is in freefall

Rachel Sider Published 01. Aug 2021
Myanmar Livelihoods and food security Internal displacement Coronavirus
Read caption A Myanmar man carries an oxygen tank on his shoulders. Myanmar is facing a shortage of oxygen supplies to treat critical patients due to the rising number of cases of Covid-19 across the country. Photo: EPA/LYNN BO BO/NTB
Six months since the military seized power in February 2021, Myanmar is crumbling under multiple crises. Millions of at-risk women, men and children are being plunged into further need.

Each of these crises is indication enough that the country is on the brink of humanitarian disaster. Together, they amount to a catastrophe.

NRC works to support refugees and displaced people in over 30 countries around the world, including Myanmar. Support our work today

An alarming spike in Covid-19 cases, combined with limited healthcare services and severe oxygen shortages across Myanmar, is resulting in thousands of lives being lost.

The country’s per capita mortality rate is now higher than India’s was at peak Covid crisis. Half of all Covid deaths in Myanmar have occurred in the past month alone. Only 3.37 million vaccine doses have been administered so far, a drop in the ocean for the country’s population of 54.4 million.

2. Some 230,000 people have been displaced by recent violence

Imagine the entire population of a medium-sized city having to move overnight. Armed clashes, violence and insecurity have erupted across the country since 1 February.

Schools and hospitals have come under attack and hundreds of thousands of people have been forced to flee their homes. Many have sought safety in remote jungle locations, staying with family or in makeshift shelters such as churches and community centres. An additional 22,000 people have sought refuge in neighbouring countries such as Thailand.

3. An additional two million people are now in need of aid

The UN launched a new response plan showing that a staggering three million people in Myanmar now require food, shelter, health, education, and other forms of humanitarian assistance. Yet, it is getting increasingly difficult to meet these needs due to a funding shortfall and difficulties in accessing the communities affected. Right now, the UN’s response plan is only 28 per cent funded.

The World Food Programme estimates that up to 3.4 million people in Myanmar will go hungry in the coming six months. Steep spikes in the cost of rice, pulses and cooking oil have made grocery shopping difficult across the country, raising fears of widespread poverty.

The international community must rally round

In the face of these spiralling humanitarian needs, the international community must rally around the new UN response plan which requires an additional USD 109 million in funding and more resources to coordinate the response.

Here at the Norwegian Refugee Council (NRC) we, along with other agencies, have scaled up our emergency response in recent months to distribute basic household and shelter items as well as cash assistance to newly displaced families in the south-east and north-east of Myanmar.

At the same time, we have not lost sight of the longstanding issues plaguing communities that have been trapped in displacement and conflict for many years. Doing so has not been easy. Our teams have been thwarted by Covid-19 infections, low testing and limited vaccination capacity, in addition to the necessary public health measures to contain the virus. Reaching people at their hour of greatest need remains challenging as we balance staff health and safety with our mission to serve the most vulnerable.

This is why we are calling on the international community to do everything in its power to help Myanmar get the Covid-19 crisis under control and to engage in political dialogue that will end the ongoing violence and suffering.