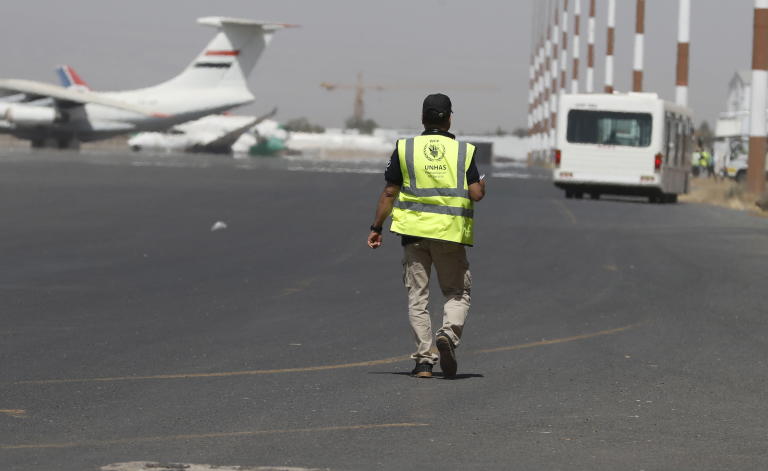 The airport is vital to Yemen’s wellbeing – both now and in the future. Here are five reasons why it must reopen urgently.

NRC works to support refugees and displaced people in over 30 countries around the world, including Yemen. Support our work today

1. It will save thousands of lives and prevent premature deaths

The airport closure is like a hostage situation that has lasted for five years.

And for thousands of sick Yemenis in need of urgent medical treatment abroad, these five years have amounted to a death sentence. Many with long-term health conditions such as cancer have died while waiting for treatment unavailable in Yemen.

In February last year, 28 patients were flown out of Sana’a airport on medical mercy flights for urgent treatment. Close to 32,000 others on the waiting list were not so lucky. The gates to Sana’a airport have swung shut since this one-off opportunity.

Mahmoud Yahya Ali recently lost one of his sons, Shawqi, to cancer. Two of his sons were on a waiting list to get cancer treatment abroad, but missed out on the limited seats available on the mercy flights. Shawqi died in July 2020, while Mahmoud was trying to take him by car to Aden airport. The day-long car journey was too much for him to take.

2. Yemenis will have more freedom to move around

As Yemen’s main airport, Sana’a used to be the gateway connecting millions of Yemenis to the outside world. It hosted as many as 6,000 passengers a day, and more than 2 million passengers every year.

But the airport is now a ghost terminal. For the last five years, Yemenis have been stripped of their right to travel abroad to seek medical care, conduct business, study or visit family. Hundreds of students have missed out on opportunities to study abroad or take up scholarships.

Thousands of Yemenis living abroad are stranded outside the country or face difficulties visiting home. The alternative routes from the south of the country are more expensive, and involve long and sometimes dangerous land journeys that cross many checkpoints and conflict frontlines.

3. It will be quicker, easier and cheaper to bring goods and aid into the country

The closure of Sana’a airport has led to an almost complete halt to commercial cargo such as medicines, medical supplies and other equipment coming into the country. This, coupled with the restrictions at Hodeidah port, has caused prices of some medicines to double, making them unaffordable for most of the population. This is further contributing to the decline of a health system already decimated by conflict.

Before the restrictions, equipment and tools needed by the private sector were frequently imported via the airport. Once the air freight stopped, prices rose dramatically due to the increased operational costs of shipping goods through ports and transporting them long distances by road.

4. It will be good for the economy

According to the Civil Aviation Authority in Sana’a, the closure of the airport has resulted in the loss of billions of US dollars to the Yemeni economy over the last five years.

Before the war escalated, Sana’a was the main international airport in Yemen. It had the highest number of passengers, number of airlines operating and volume of cargo. Around 80 percent of domestic and international passengers travelled through the airport. Many businesses and government organisations used the airport to travel outside the country to conduct business. After the closure, international businesses were no longer able to use the airport and were discouraged from conducting business in Yemen.

The country’s economy used to benefit from the income made from passengers travelling through the airport and goods transported through it. When the airport closed, many people lost their jobs and companies and suppliers providing services to the airport closed down or suffered economic losses.

5. It can build confidence in the peace process

The reopening of Sana’a airport will give sick Yemenis a lifeline and ease the humanitarian situation. The closure of the airport, with its restrictions on commercial imports, humanitarian goods and the movement of people, disproportionately hurts civilians and therefore violates the laws of war according to the UN Human Rights Council.

Under UN Security Council Resolution 2451, warring parties are being urged to work with the UN Special Envoy to reopen the safe and secure operation of Sana’a airport for commercial flights. However, there has been a lack of progress to date because of disputes over the terms of the reopening.

As well as alleviating suffering and preventing thousands of premature deaths, the reopening of Sana’a airport could act as a confidence-building step in support of the UN-led peace process in Yemen.

The Norwegian Refugee Council is calling on the Saudi-led coalition, the internationally recognised government of Yemen and Ansar Allah to come to an agreement on reopening Sana’a airport for commercial flights. We are also calling on the UN Security Council, the United Kingdom, France and the United States to apply pressure on all sides to end their political deadlock over the airport, in order to ease the humanitarian suffering caused by the closure.