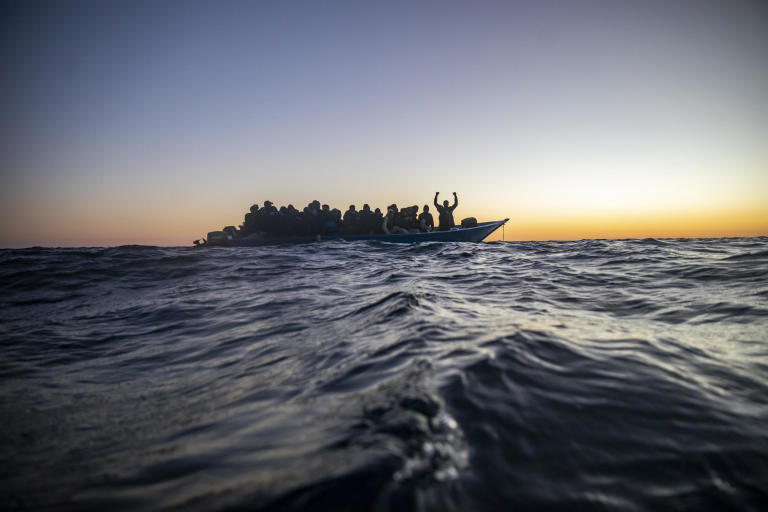 
Eight reasons why people are dying in the Mediterranean

Roald Høvring Published 04. May 2021
Libya Asylum policy
Read caption FEBRUARY 2021: Migrants and refugees from different African nationalities wait for assistance aboard an overcrowded wooden boat, as aid workers of the Spanish NGO Open Arms approach them in the Mediterranean Sea, international waters, at 122 miles off the Libyan coast. Photo: Bruno Thevenin/AP/NTB
According to the International Organization for Migration (IOM), more than 1,600 people lost their lives in the Mediterranean during the first 11 months of 2021. The number of deaths recorded for the whole of 2020 was 1,448.

“This tragedy and those before it were completely avoidable, had Europe stepped up and allowed rescue missions to bring migrants and refugees to safety, rather than shifting responsibility to others,” says Dax Roque, the Norwegian Refugee Council’s country director in Libya.

The Central Mediterranean route, from North Africa (primarily Libya) to Italy, continues to be the most active and dangerous route for people crossing to Europe by sea. More than 18,580 refugees and migrants departing from the coast of Libya have been reported missing since 2014, according to IOM figures.

Here are eight things you should know about refugees and migrants risking their lives on the journey from Libya to Europe:

#1: More than half a million people affected

More than half a million migrants, refugees and asylum seekers are currently living in Libya. They are amongst the most vulnerable people in the country and are at risk of arbitrary detention in inhumane conditions, as well as exploitation, kidnapping, sexual violence, torture and extortion, among other abuses. Most of them do not have legal status in Libya and have no way to make their status official or apply for work permits.

#2: Thousands being held in detention sites

Large numbers of migrants continue to be arbitrarily detained for unlawfully entering Libya. Thousands of migrants and refugees are believed to be being held in detention sites, including informal ones not run by the government. Conditions in these detention centres are extremely poor, with overcrowding commonplace and facilities inadequate. Migrants have reported suffering abuse in the detention centres.

Although a large percentage of these communities stay in Libya for extended periods of time to access informal work and send money back home, the number of people attempting to cross the Mediterranean has increased during 2021. According to the IOM, 1,645 people lost their lives in the Mediterranean during the first 11 months of 2021. This is more than the total number of deaths recorded for the whole last year, when 1,448 people were reported dead or missing in the Mediterranean.

#4: True number likely to be much higher

IOM’s ability to monitor deaths in the central Mediterranean has been drastically reduced because of the absence of state search-and-rescue vessels.  So, the actual number of deaths is likely to be much higher.

#5: No safe and legal pathways to Europe

Safe and legal pathways to reach Europe are practically non-existent, pushing people to risk their lives crossing the Mediterranean. When spring and summer arrive next year, the Norwegian Refugee Council (NRC) expects more people to attempt this perilous journey. NRC began operations in Libya in 2017 and has continued to scale up its operational and programming presence supporting displaced Libyans, returnees and host communities as well as vulnerable non-Libyan communities.

International law obliges states to rescue people at sea. However, as attitudes harden in Europe against asylum seekers and migrants, most of whom come from Africa and the Middle East, more countries are violating the law. Countries like Italy and Malta have barred migrant vessels from disembarking in their ports. European countries have imposed fines on private rescue ships such as the Ocean Viking and introduced rules making it difficult for such vessels to rescue migrants at sea.

#7: Much responsibility lies with the EU

The EU bears much of the responsibility for the huge death toll in the Mediterranean. The EU and its member states have thus far focused on deterring migrants and refugees from trying to reach their shores. We need them instead to support search-and-rescue missions to save people in danger.

#8: Libya not a safe port for return

Migrants and refugees who are returned to Libya face indefinite, arbitrary detention and a real risk of sexual violence, torture, forced labour, extortion and other forms of ill treatment. Thousands of migrants, refugees and asylum seekers seeking refuge through the central Mediterranean route have been intercepted by the EU-funded Libyan Coast Guard and returned to Libya. Many have faced horrendous abuses.