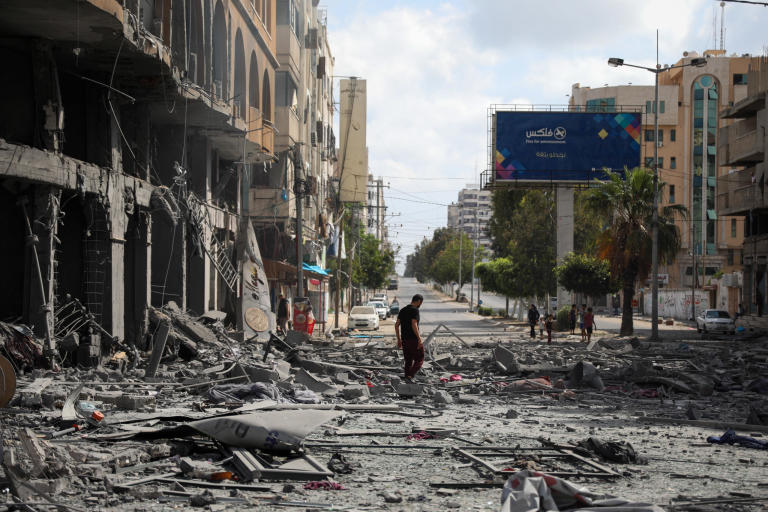 
Don’t let the silence of the aftermath kill us

Yousef Hammash Published 21. May 2021
Palestine
Read caption A Palestinian man inspects the ruins of Al Jawhara Tower at the centre of Gaza City after it was bombed the previous night. Photo: M. Hajjar/NRC
I have barely slept since the bombs started falling on Gaza again. I’ve been wearing the same t-shirt and shorts for over a week, unable to retrieve anything from our damaged home. I think I’m about to fall asleep and then my mind starts racing with thoughts. And then the air strikes. It’s been one hell of a week and we don’t know how much longer this will go on for.

On Tuesday 11 May, at around 6pm, I was at home with my wife, now in her eighth month of pregnancy, and my three-year-old daughter Eliaa. That was when the Israeli army attacked the apartment below mine with a drone strike.

NB: The article was written before a ceasefire took hold early on Friday. The conflict saw 11 nights of cross-border bombardments and nearly 250 deaths.

It was a crazy moment. My daughter was totally terrified. She kept crying, too young to understand what was happening. The only thing I could think of was to get out of our house as quickly as possible. From previous experience I knew that a drone strike is usually followed up by a full-blown air strike from a fighter jet.

We rushed downstairs and fled to my parents’ house down the street. That night was one of the craziest nights of my life. The Israeli air force attacked the same neighbourhood again. No surprise there – nowhere is safe in Gaza. We were hit by more than 30 air strikes in the space of two minutes.

The next day I went back home to get some clothes and medicine for my wife, when suddenly Israeli forces attacked my house again. Once again, I had to rush down through the smoke and run away from there. Together with my parents, we decided to flee from their apartment too, in search of safety at my grandparents’ place. Another night of heavy bombardment.

I’ve never seen the streets destroyed in this way. It is clear that besides targeting us, Israel also wants to destroy our essential infrastructure. Ambulances cannot drive through the massive craters to retrieve the wounded, buried alive under the flattened high-rises.

Now we’re staying at my in-laws’, more than 20 people in one flat. The other day during another bout of heavy bombing, I went to grab my daughter just to hug her, but I found that my reaction scared her more than the bombing. I realised just how hard my wife has been working with her to convince her that these are just big fireworks.

We sleep tight together in the hope that, if we were to get hit, we would also die together. Mourning your loved ones is a terrifying prospect, unbearable to think about, but an all-too-common Palestinian experience. Enough of that. It’s sickening.

We’re living in a nightmare that repeats itself every few years. What will happen after the guns go silent? What have we got to live for here, in this besieged enclave? What kind of future will I give my daughter?

One thing is sure: we cannot go back to business as usual. “Restoring calm” is not enough, either for us in Gaza, or for the Israeli civilians on the other side, or for our brothers and sisters in the West Bank.

We’ve been through this already. In my 29 years of life I’ve seen five major escalations where Gaza is pounded and then we are meant to start again from scratch. Foreign governments pump money in to revive us and repair the damage left by Israel, just like they do with the poor communities in the West Bank who see their property destroyed.

At the Norwegian Refugee Council (NRC), we work with children traumatised by the violence, we help people to rebuild their houses, and we assist those facing evictions in court. In essence, we step in to repair or minimise the damage that Israel inflicts upon us as its national policy. And this is what we are doing right now, working to help others while our own families are in danger.

Countless people have died, many maimed for life, only to go back to the forgotten realities of this repressive occupation and its suffocating siege. Expulsion and forcible transfer of some of the most vulnerable Palestinians, destruction of our property, settler violence enabled by the Israeli army and the state, the imprisonment of over 2 million people for a crime they didn’t commit: there can be no peace and security for any of us, Israelis and Palestinians alike, for as long as these historical injustices are left to fester.

That is why, as terrified as we are of the relentless air strikes, what terrifies me more is the silence of the aftermath. A silence that will allow the world to forget about us once again until the next round of hostilities, while we die a slow, anonymous death under the pretence of calm. That is no life. That is when dying of an air strike is more merciful.

Yousef is an advocacy officer with the Norwegian Refugee Council in Gaza and a former journalist.