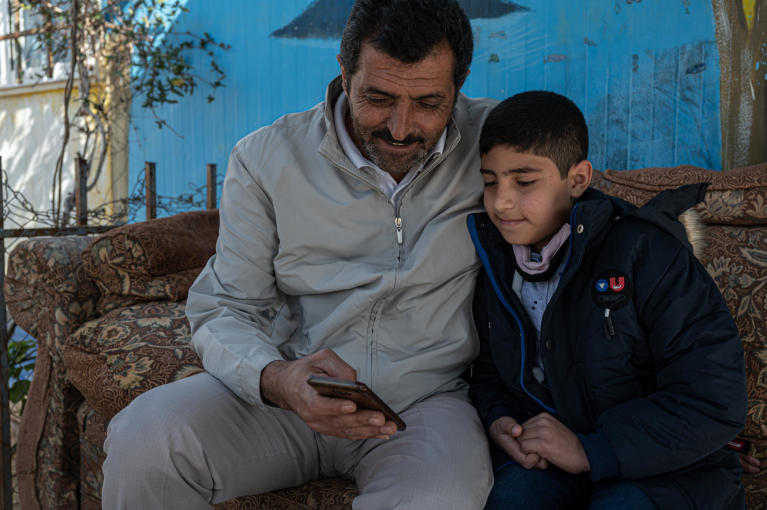 10 years of war in Syria

Roald Høvring and Daniel Wheeler Published 19. Mar 2021 Edited 11. Mar 2021
Syria Children
Read caption JORDAN. Osama is sitting on a sofa next to his father Mohammed outside their small caravan in Zaatari refugee camp. Photo: Daniel Wheeler/NRC
Osama, 9, has lived in a refugee camp in Jordan his whole life. He only knows Syria through the photos and videos his father shares with him. Yet when asked where his home is, he replies “Syria”.

After ten years of war there are thousands of Syrian boys and girls dreaming of peace and a place to call home. Osama is one of them.

“My dad tells me about my grandfather in Syria and that he was a very good man,” says Osama. “He always tried to help people and I wish I had met him. I like to look at pictures of him and see the farm where my dad grew up.”

Osama is sitting on a sofa next to his father Mohammed, 49, outside their small caravan in Zaatari refugee camp, Jordan. He shares this tiny home with his mother, father, and seven siblings.

Born in the camp

“Osama was born two months after we arrived the camp. I encourage him to study and do sports and take any training opportunity he can get, but I really don’t know what type of future he will face,” says Mohammed.

“My dad tells me about his childhood in Syria and what our house was like,” says Osama. “He shows me videos of my aunts, uncles and cousins in Syria and I would like to meet them someday.”

“We began to see people getting killed”

Mohammed tells us about the war and how he and his family escaped the bombs.

“When the fighting started in Syria, we weren’t too badly affected. But eventually the war came closer and closer to our home,” he recalls.

“We began to see people getting killed so I knew I had to get my family to safety. We walked for four days and avoided the main roads as we were afraid of getting bombed. My wife was pregnant with Osama at the time, and we had our four young children with us too.”

“The journey was difficult. I had to carry our suitcases over difficult terrain and I also had to carry my children when they became tired.”

When the family finally reached the border with Jordan, they met a group of Syrians who had also fled their homes.

“There was around 300 of us waiting to be taken to safety. We arrived in the camp at one in the morning. We didn’t have a lamp and I couldn’t see a thing. I had no idea where we were, and I had to put my children on the floor so they could sleep.”

“I told the children that we would return home soon”

Mohammed admits that he questioned whether he had made the right decision for his family.

“We were all afraid for the first few weeks, but we were glad to be away from the sounds of bombing,” he says. “As long as we were together, we felt like it was going to be okay.”

“My eldest child asked lots of questions. He was aware of the situation and kept asking when we were going to go home. I kept telling him that we would only be there for two months. And then two months later, I told them it would be another two months. And so on.”

The relatives Osama has never met

“I teach sports, and this has given me a sense of purpose,” he says. “But sometimes I have bad days and wonder what I am doing here.”

He has siblings that remained in Syria and they have told him that the family’s house was destroyed in 2013.

Mohammed speaks with feeling about his father: “My father died shortly before we fled Syria and I have never visited his grave. I tell Osama about his grandfather often and sometimes we watch videos. My father was a good man, and I am deeply sorry that Osama will never get to meet him.

“In fact, Osama has never met any of his relatives living in Syria. I show him the videos they send on WhatsApp and I tell him who everyone is. He keeps asking when he will get to meet them.”

“I don’t regret fleeing Syria with my family when I see reports of children that have been killed in the fighting,” Mohammed continues. “But I never imagined that we would be gone this long. We have always lived two months at a time and that has continued for nearly ten years. What’s to say the situation in Syria won’t be even worse in another ten years?”

Dreaming of a new home in Syria

Mohammed has a clear message to the world. “How are all these children supposed to live here in the desert?” he asks. “The world needs to help end the war in Syria so we can go home or let us live somewhere else as normal people.”

“Osama has only ever lived in a caravan in the desert. He doesn’t even know what it’s like to live in a real house.”

Osama is attending formal school in the camp where he also receives extra support from NRC, and has dreams and ambitions of his own.

“I want to be an engineer when I am older and build a new house for my family in Syria,” he says.

And when asked where he feels his home is, Osama replies simply: “Syria”.