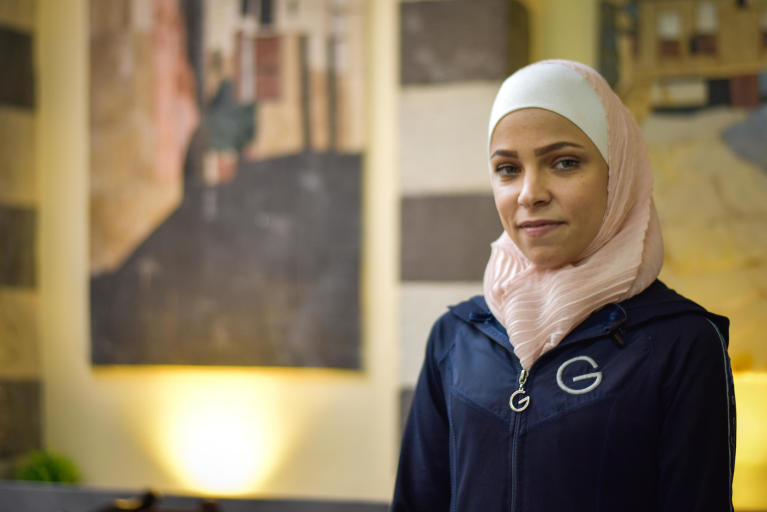 10 years of war in Syria


Becoming a mother in a warzone

By Oula Mashfj and Rebecca Crombleholme Published 16. Mar 2021
Syria Syria crisis War and conflict
Read caption Joud’s determined expression hides the pain that the Syria conflict has caused her. Photo: Tareq Mnadili/NRC
Becoming a mother is a feeling like none other. It can be filled with elation, excitement and incomparable love. But it can also be incredibly challenging. Joud shares what it has been like becoming a mother in the midst of the Syria conflict.

Joud is from Harasta, Eastern Ghouta. She remembers with fondness what her city was like before the war.

“It was very beautiful and clean. It had lots of green spaces and busy markets. It had the perfect number of people; somewhere between crowded and quiet. Wherever you went you could find beauty,” she says.

“Now it is destroyed.”

Harasta was a warzone for many years. It also faced five years of siege. Although peace has now returned to the area, much of the city is extensively damaged. And the scars for the residents run deep – especially for Joud, who was forced to flee and live in displacement during her teenage years.

“The crisis changed my life. Because of it, I met some people I shouldn’t have. It complicated my life. If we weren’t displaced and far from home, we would have made better choices regarding what people we let into our lives.”

“I got pregnant almost right away, and I gave birth to my first boy at the end of the same year. I was very happy to welcome my first child. But still, having a husband and a kid at the age of 17 was a big responsibility.

“I was happy but not as much I had imagined I would be in that situation.”

Joud was living far away from home. She was forced to leave school after ninth grade due to being displaced, leaving her with only a basic education. With chaos engulfing the country, her future seemed uncertain.

“Were it not for this crisis, I would have had a wedding like any other girl and would prepared more for my first baby. I would have had my family surrounding me and guiding my steps into motherhood,” she says.

Joud went on to have a second child with her husband, who she is now separated from. She is now a single mother of two small children. Joud and her family are back in Harasta, but life is no less complicated. Upon returning to the city, they found their home destroyed.

“When we saw our home for the first time, our hearts weighed heavy. It was not only our house that was affected but also my dad’s shop in the same area. When we left, we expected that we were going to leave the house for a couple of weeks and then return to find everything in our city was still as it used to be. But we were away for seven years.”

We ask Joud about what dreams she had as a young teenager.

Joud starts to cry and is unable to finish her sentence …

A way out of hardship

After Joud and her husband separated, she became depressed. Then she got a call from a concerned friend late one night.

“She suggested the Norwegian Refugee Council’s training programme for me, and I was so happy! The timing was perfect. I wanted a way out of the drastic hardship I was stuck in,” Joud recalls.

Early the next day, she set off to attend the interview and was accepted onto our tailoring training programme.

“It was beautiful to have a dream of mine come true. When I was a little kid the sewing machine always sparked my curiosity and I wanted to try using it. But I never had the guts to do so because I did not know how.”

Joud has now completed the training programme. Like all of our graduates, she has been provided with the equipment she needs to begin her new professional career.

“When I brought the sewing machine home, I awoke my children’s curiosity! They followed me around asking:

‘Who owns this machine?’

“Whenever I head to the place where I keep the machine, they go out of their way to outrun me! They are very curious to see what I am doing and how I use it.”

Joud faced some resistance from a few family members who didn’t approved of her new career.

“My brother couldn’t accept the idea of me working. But now he is the one helping me. He is offering to find merchants I can work with and providing me with fabric.

“And my dad is a huge supporter. He told me that if I asked him to, he would help me in opening a small shop to develop my project.”

Joud has begun using a traditional technique called Aghabani that always piqued her interest as a child.

“No-one here knows what Aghabani is, maybe only very old people. It was a huge accomplishment for me to learn about this old handicraft. Being able to work in something no-one else knows gives you a feeling of uniqueness. Even my mum wants to learn and is asking me to teach her!”

With the war continuing and the country facing economic collapse, life is full of uncertainty. But learning this new skill has given Joud hope for her children’s futures.

“I wish that my boys will have a better future than mine, and I will strive to make that wish come true. I want to empower them and support their education as it will be their only means in life to become successful and active members of their community.

“And now I have started to establish myself, I can have my own life back!”

The Norwegian Refugee Council is one of only a few agencies operating across the whole of Syria. Against a backdrop of intense conflict, we work to provide emergency, transitional and longer-term assistance to people in need.