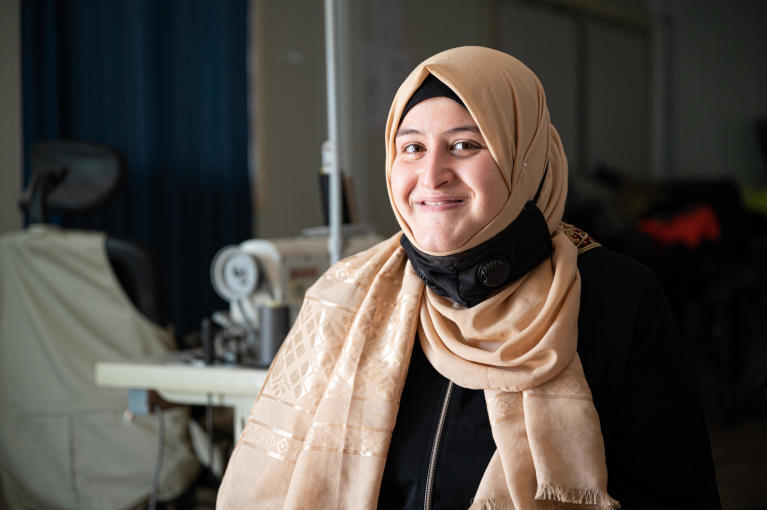 Rebecca Crombleholme and Daniel Wheeler Published 02. Sep 2021 Edited 01. Sep 2021
Jordan Education Youth
Read caption Ala now believes she has a bright future. Photo: Daniel Wheeler/NRC
The opportunities for young people living in refugee camps are limited. This can lead to despair. But Ala, 22, is proof that with strength, independence and the right support, the future can be bright.

It’s summer. Early each morning, Ala gets up and treks across Zaatari refugee camp in Jordan for an hour in the desert heat. She walks through what has become a large, sprawling urban settlement that some 76,000 Syrian refugees now call home. She arrives at work at 8.30 am. The long walk is worth it.

“This opportunity that NRC has given me has provided me with financial independence and an opportunity for success in my life,” she says with a determined smile.

Support our work and make sure that more displaced young people can receive an education.

Ala is from Syria, but she and her family were forced to flee in 2012 when the war made it too dangerous to stay.

The journey to Jordan was terrifying. Ala was just 13 years old at the time.

“I left on foot at 10 pm and arrived at the Jordanian border at 6 am the next morning,” she remembers. “We travelled at night because we were terrified of being attacked on the way. There were around 100 of us and many people were injured.”

I felt like a drowning person that had been saved.
Ala

“When we arrived at the border, we were met by the [Jordanian] army. I felt like a drowning person that had been saved. I felt on edge the entire journey and now I had soldiers telling me ‘you are safe now’. It was all so overwhelming.”

Beginning adulthood in a camp

Young people who are displaced struggle more than others to get an education. Only three per cent of the world’s refugees go to university or take higher education.

For humanitarian organisations like the Norwegian Refugee Council (NRC), it’s vital to invest in education and opportunities for displaced young people. Without these, young people can lose their sense of worth and hope for the future.

For Ala, her opportunity came in the form of learning to sew.

“I found out about NRC’s youth programme after doing a four-month sewing scholarship with a different organisation,” says Ala. “I became very passionate about sewing so I wanted to continue my training.”

The programme is delivered in three stages. The first two stages focus on training, while the third stage is a work placement.

“The programme at NRC seemed perfect. When I started, I realised that I still had so much to learn. It was very intensive but rewarding.”

Ala is now working as a seamstress in NRC’s youth centre. The centre is financially self-sufficient, and all profits are reinvested to provide more employment opportunities for young people. The centre also offers carpentry and welding training, among other courses.

When we asked Ala what the job means to her, she said: “This opportunity that NRC has given me has provided me with financial independence.

“My father is so proud of me and that is very important to me.”

As the oldest of 11 siblings, Ala is able to support them with the money she earns from the job.

“I am the eldest, so I feel responsible for them. I looked after them during coronavirus,” she says with pride.

While many displaced young people can lose hope, Ala is ambitious and optimistic about the future.

“In the future, I want to open my own sewing centre for women which has integrity and quality – just like NRC,” she concludes.

Support our work and make sure that more displaced young people can receive an education.