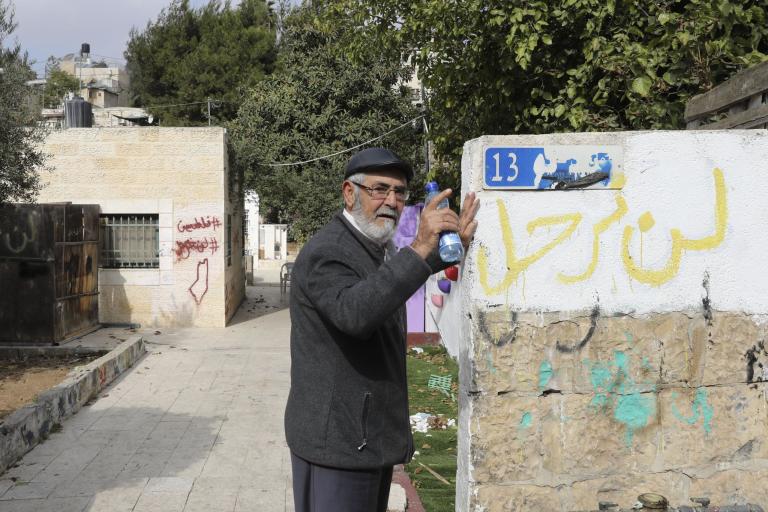 
10 things you should know about the evictions in East Jerusalem

Roald Høvring Published 11. Nov 2021
Palestine
Read caption Nabil al-Kurd, a Palestinian resident of the Sheikh Jarrah neighbourhood of East Jerusalem, where his family is under threat of forced displacement from their homes by Jewish settlers, stands next to graffiti on his front gate that reads "we won't leave". Photo: Mahmoud Illean/AP/NTB
The Sheikh Jarrah neighbourhood in East Jerusalem was a hotspot during protests and clashes earlier this year. Now it’s back in the headlines. Here’s why.

When violence broke out in Palestine and Israel earlier this year, one of the main drivers of the escalation was anger over the looming evictions of Palestinian families in the East Jerusalem neighbourhood of Sheikh Jarrah.

The families in Sheikh Jarrah have led largely peaceful protests against their eviction for over a decade. After a years-long legal battle against the settler organisation seeking to take over their homes, Israel’s Supreme Court tried to get the two sides to accept a deal of its own making.

The Palestinian families could stay in their homes for a number of years as protected tenants, the court suggested, but only if they acknowledged that the settlers were the true owners.

Last week, the four Palestinian families announced they were rejecting the proposal on principle. Evictions once again loom over their homes, potentially sparking a diplomatic incident, renewed protests and clashes, and a humanitarian crisis.

Here are 10 things you should know about the evictions in East Jerusalem:

#1. Many people lost their homes during the Arab-Israeli war of 1948

After Israel annexed East Jerusalem in 1967, it passed the 1970 Legal and Administrative Matters Law, allowing Jewish families to reclaim lost property they allegedly owned in East Jerusalem. Meanwhile, the 1950 Absentee Property Law, and its amendment in 1973, prevents Palestinians from getting back their property in West Jerusalem and elsewhere.

In June 1967, Israel annexed East Jerusalem into its territory, in contravention of principles of international humanitarian law and international law.

Today, East Jerusalem remains occupied territory under international law. Any measures aimed at altering the status of the city have no validity, according to UN Security Council resolution 252.

Nahalat Shimon International, a private settler company registered in the United States, has been driving eviction lawsuits against families in the Karm Al-Jaouni area of Sheikh Jarrah since 2008. Nahalat Shimon has submitted plans to build a new settlement with some 200 housing units in the area.

According to the UN, some 218 Palestinian households across East Jerusalem have eviction cases against them, most of which were initiated by settler organisations. Some 970 people, including 424 children, are at risk of displacement.

#6: Israel has expropriated 35 per cent of East Jerusalem for Israeli settlements

Over 20 per cent of all demolitions, evictions, confiscations or seizures of Palestinian properties in 2020 took place in East Jerusalem. In many cases, the forced eviction of Palestinians occurs within the context of Israeli settlement construction and expansion.

#7: There have been tensions and clashes between Palestinians and Israeli settlers

The families in Sheikh Jarrah have led largely peaceful protests against their impending evictions. Unfortunately, clashes have erupted between Palestinians and Israeli settlers from time to time, with the Israeli police employing a heavy hand to disperse Palestinian crowds.

#8: Israel’s Supreme Court delayed the evictions, but that could end

Amid rising tensions and clashes between Israeli police and Palestinians in East Jerusalem, Israel’s Supreme Court postponed hearings on the eviction of the four families – Jaouni, Kurd, Qasim and Skafi – and tried to get the two sides to agree to a deal of its own making. The proposal has since been turned down.

#9: Palestinian families once again face the threat of eviction

Following the rejection of the deal that would have offered only temporary protection, the Palestinian families from Jerusalem’s Sheikh Jarrah neighbourhood once again face a looming threat of forcible eviction.

#10: Israel has an obligation to protect occupied civilians

Israel, as a state party to the Fourth Geneva Conventions, has an obligation to protect occupied civilians and refrain from transferring populations in and out of occupied territory.

Read more about NRC in Palestine.