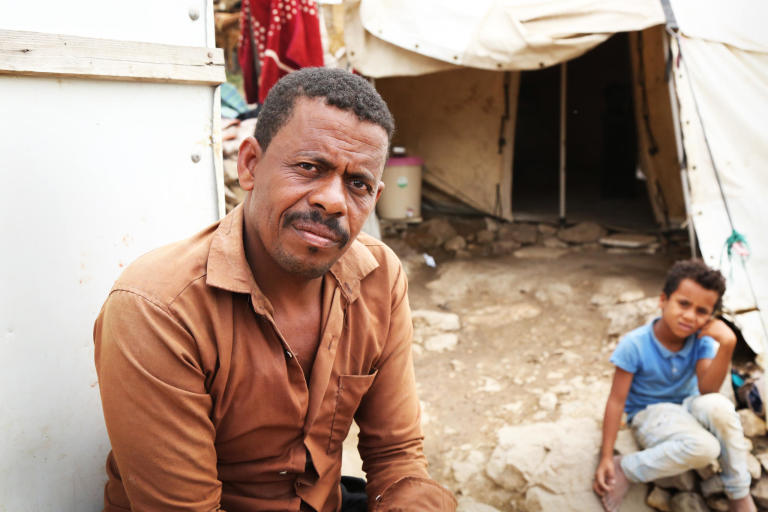 
Where vegetables are a luxury

Paul Ireland Published 04. Aug 2020 Edited 31. Jul 2020
Yemen Livelihoods and food security Coronavirus
Read caption Ahmed Ali Muqbel Ali with his eight-year-old son, Safi Ahmed Ali. The family of ten are struggling to cope with rising food prices in Yemen. Photo: Khalid Al-Banna/NRC
“We are more scared of food prices than of the virus,” says Ahmed Ali. Unable to find work and with eight children to feed, he and his family are struggling to cope with the effects of the pandemic in Yemen.

Ahmed Ali Muqbel Ali is a father of eight children. Formerly a stone-breaker, he was forced to flee his home village with his family in 2017. They now live in a tent in the Al-Malika camp, in Taiz governorate, south-west Yemen.

As the impact of Covid-19 begins to be felt across the country, Ahmed Ali and his family are struggling. Not only is there less work available, but food prices are rising dramatically. In the last two months, they have seen the cost of flour go up by 40 per cent. Other prices are rising too.

Meat is too expensive now for many Yemenis. The butchers in the central meat market in Taiz city have lost most of their customers.

Even vegetables, a basic dietary staple, are now a luxury for many displaced people and others who have lost their source of income since the arrival of Covid-19.

Since Covid-19 hit Yemen in April, one in every four vulnerable families has lost all income and half have seen their incomes drop by over 50 per cent, according to a recent survey by the Norwegian Refugee Council. A staggering 94 per cent of families reported lack of food as a top concern.

Even before the pandemic, Yemen was the site of the largest food crisis in the world. A major aid effort pulled the country from the brink of famine last year, but it now risks sliding back. New data warns that a million more people are likely to fall into “crisis” or “near-famine” levels of hunger in the coming months, unless urgent action is taken.

“The families we spoke to were already on the edge of survival and now almost all of them tell us their situation is worse,” says NRC’s Country Director for Yemen, Mohamed Abdi.

Ahmed Ali is doing everything he can to ease the impact on his children, including dividing up one meal into three so they feel like they still are eating three meals. If there isn’t enough food to go around, he gives it to the children and goes hungry himself.

“There are times we only eat when necessary,” Ahmed Ali says. “The food for one meal, we divide it into three meals. We used to buy vegetables, fruits and other things but now we can’t. Two weeks ago, we went two days without any food.”

Ahmed Ali used to own livestock back in his home village, which helped to provide for his family. But he sold them when he fled, and now has only one goat left.

On a small, rocky patch of ground beside his tent, he is attempting to grow a pumpkin tree to supplement the family’s meagre diet.

For families like Ahmed Ali’s, the outlook is bleak.

“Never before have Yemenis faced so many threats at once, and all this at the height of a devastating pandemic,” says Mohamed Abdi.

“Yemen needs a rescue package, in the form of a cash injection to stabilise the economy, a restoration of aid funding, and an end to restrictions on imports of food and fuel. And there must be a ceasefire.”