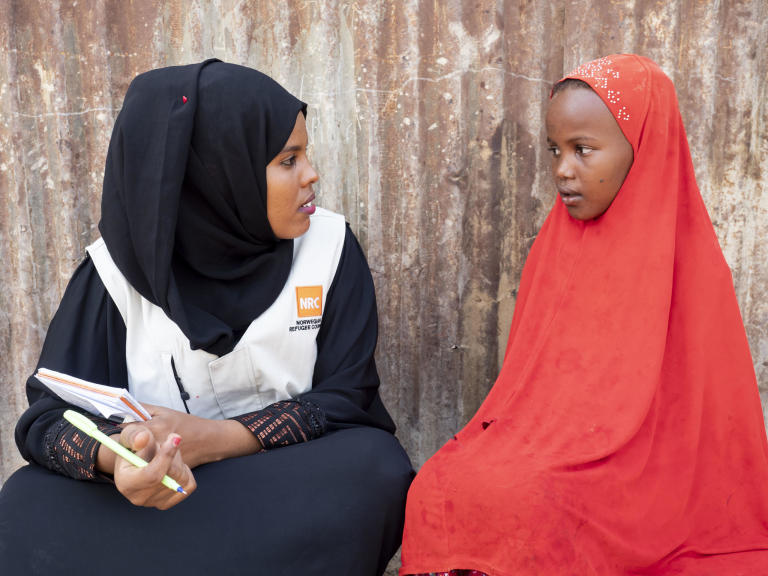 Eirik Christophersen Published 26. Jun 2020
Global
Read caption Run, 10, fled with her family when shelling destroyed their house in Somalia's capital, Mogadishu. She is met by NRC staff member Hawa Atosh after the family has arrived safely in Bosaso. Photo: Ingrid Prestetun/NRC
With the help of our supporters, the Norwegian Refugee Council (NRC) provided assistance to 9.1 million displaced people in 2019. Never before in our 75-year history have we reached out to so many people in need of help and protection.

There are more people fleeing their homes than ever before. Around the world, nearly 80 million people have been forced to flee because of violence, conflict and persecution. In addition, nearly 25 million were displaced by disasters in 2019 alone.

NRC is grateful that the support we receive from private and institutional donors enables us to increase our efforts as the need increases. However, the needs are far greater than the total resources available for humanitarian work.

“At a time when thousands of citizens are taking to the streets to protest against inequality, discrimination and injustice, we must also stand up to give a voice to the displaced and those fleeing violent racism and ethnic discrimination in conflicts with little media attention,” says Jan Egeland, Secretary General of NRC.

Over three million people in 2019 benefited from clean water and improved sanitation and hygiene conditions. This is crucial to preventing the spread of diseases, including Covid-19.

Nearly two million received food assistance or help to earn their own income. More than 1.5 million got help with obtaining a temporary or permanent home. A similar number received legal assistance and advice, 1.2 million received educational support, while almost half a million lived in NRC-run displacement camps. Many displaced people received several types of assistance.

Last year, NRC worked in 33 of the most conflict-stricken countries spread across four continents. These are the countries where we assisted the largest number of people in 2019:

The UN calls Yemen “the world’s worst humanitarian crisis”. The country has been devastated by five years of war, and the situation has been further aggravated by the Covid-19 pandemic.

A shortage of international aid has the potential to trigger a massive famine disaster and outbreaks of diseases such as cholera and Covid-19. In the spring of 2020, more than 5.5 million people were at risk of losing access to food, water and medicine. A total of 24 million people need aid and protection. That’s 80 percent of Yemen’s population.

Following the peace agreement in 2018, South Sudan took some small steps towards stability in 2019. However, there is still major unrest in parts of the country and 3.6 million are displaced within South Sudan or have fled to a neighbouring country.

A total of 860,000 have fled to Uganda, where many receive help from NRC. Hunger levels in South Sudan are at a record high and were exacerbated by heavy flooding in 2019. Around seven million people are no longer able to feed themselves and 16 per cent suffer from malnutrition, which is above the World Health Organisation’s emergency threshold of 15 per cent. NRC helped provide food for 440,000 people in 2019.

Some 1.7 million people were displaced in the Democratic Republic of the Congo in 2019. The crisis continued into 2020, when an additional 480,000 were forced to leave their homes during the period from March to May. Military operations, attacks by armed groups and escalating conflict at a local level forced hundreds of thousands to flee in the eastern provinces. The country has the second biggest hunger crisis in the world after Yemen.

During 2019, a new Ebola outbreak killed more than 2,200 people in the provinces of Ituri and North Kivu. The outbreak was the second largest ever recorded, and the largest in DR Congo’s history.

In addition to our usual core aid activities (see above), NRC has developed a special scheme for local conflict resolution, especially adapted to the conditions in DR Congo.

After 40 years of war and conflict, nine million Afghans need humanitarian assistance. A total of three million people have fled the country, mostly to neighbouring Iran and Pakistan. Three million more have been displaced within Afghanistan’s borders because of the conflict. Of these, 461,000 were displaced during 2019. In addition, hundreds of thousands have fled their homes due to drought.

Despite the prime minister, Dr Abiy Ahmed, receiving the Nobel Peace Prize in 2019, Ethiopia is still characterised by internal tensions and conflicts that have led to 1.4 million people being internally displaced. As the country began a programme of reforms, there were hopes of positive developments across the whole Horn of Africa region. But now, Ethiopia’s political experiment appears more uncertain.

Ethiopia is also an important host country for refugees fleeing conflict and oppression in neighbouring countries.

Somalia has suffered decades of conflict. In 2019 alone, 188,000 people were forced to flee within the country from violence, persecution and conflict. In addition, 479,000 were displaced due to drought and floods.
The security situation means that many areas of Somalia are not accessible to aid organisations. As a result, many people flee to cities to receive humanitarian aid when they are hit by disasters, which are occurring with increasing frequency due to climate change.

At the end of 2019 and early 2020, fighting for control over north-western areas of the country escalated, and 900,000 people were displaced. Many of these are now living in very difficult conditions. For most refugees it is still not safe to return home, but difficult conditions in neighbouring countries mean that many see no alternative but to return to Syria.