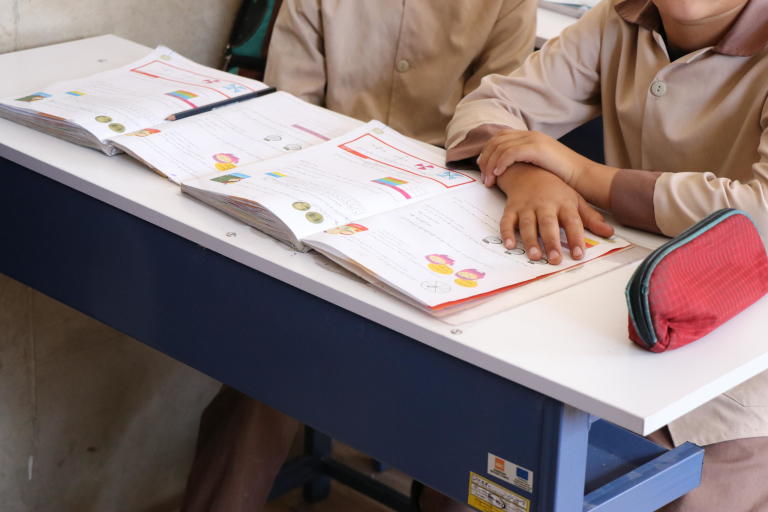 
The right to a second chance

By Saba Noori Published 28. May 2020
Iran Donors and partners
Read caption Afghan children at an Iranian public school. NRC equipped the school with facilities such as benches, boards and heating systems. We also repaired latrines, piping and insulation. Photo: Shiva Shahmohammadi
“I felt afraid of having to return to Afghanistan and having to give up on the children.” Three years ago, Maryam*, a young Afghan woman in her early 20s, fled to Iran in search of safety when violence put her family’s lives at risk. But without documentation the family was left marginalised. With support from the Norwegian Refugee Council (NRC), Maryam’s family are now feeling the world opening up to them.

Maryam arrived in Iran with her husband and two relatives, Saied* and Sara*. Both Saied and Sara were under the age of seven when they arrived in Iran. Maryam had taken them under her wing when their parents were killed in the violence in Afghanistan.

It took Maryam and her family several days to reach Iran. By the time they arrived, their money had almost run out. They moved several times, eventually settling in a small rented house.

Maryam’s husband suffered from addiction and was abusive. He eventually abandoned the family. At the time Maryam was pregnant.

To cover the rental costs, Maryam started doing some tailoring work with a sewing machine belonging to her landlord. Saied and Sara, whom she now calls her children, had to work on the streets selling chewing gum to pay for food and other basic expenses. Maryam also knitted scarves and hats, earning a little money.

When Maryam gave birth, her baby did not receive a birth certificate. She now had three young children to take care of.

At risk of eviction

Maryam’s situation deteriorated further when her landlord sold the house and the sewing machine. The new owner gave Maryam and the children one month’s notice to leave.

“I was under pressure. My landlord wanted us to move out from the house. I felt afraid of having to return to Afghanistan and having to give up on the children,” says Maryam.

The government of Iran estimates that there are between 1.5 and 2 million displaced Afghans in Iran whose legal status, like Maryam’s, is considered “undocumented”. Without a valid Afghan passport with an Iranian visa, and not having de facto refugee status, Maryam is unable to work in a formal job, open a bank account or be protected from being sent back to Afghanistan.

“The world has opened up to me”

One day when Maryam took her baby to a medical clinic, she heard about the Norwegian Refugee Council (NRC) and reached out to us. We assessed her situation and identified her family as very vulnerable.

With generous support from the European Union, we provided Maryam with legal counselling so that her family can feel safe and protected. We also provided her with multi-purpose cash assistance, so that she could buy the items she needed most.

Maryam used the financial assistance she received to pay her house deposit, saving her and the children from being evicted.

“I feel happy that I could pay my deposit. My living conditions have improved a lot and I feel that the world has opened up to me,” says Maryam.

Our Counselling and Legal Assistance (ICLA) team help displaced Afghans, including Maryam, to obtain or renew legal documentation, secure their tenure, access essential services such as education, and address their most pressing protection needs. This has helped Saeid and Sara to start at an Iranian public school, which was opened up to Afghan children in 2015 as part of the “Education Decree”.

“My children do not work in the streets anymore; instead they go to school. They like school and have Iranian and Afghan friends. I feel their behavior has changed and they are doing well in school and are keeping up with their classmates,” explains Maryam happily.

In 2015, Iran’s government issued a decree indicating that all Afghan children, regardless of their legal status, should be able to enroll in Iranian public schools. The decree allows undocumented families to apply for an “education pass”, giving the children access to public schools. The education pass also grants children and their families temporary protection against being returned to Afghanistan if their children remain in school.

Prior to the decree, only documented families – those with de facto refugee status or passports and Iranian visas – could register in public schools.

According to the Government of Iran, in the 2019/20 academic year, 480,000 displaced children from Afghanistan are enrolled in public schools. This includes nearly 140,000 who are considered “undocumented” but are accessing school through an education pass. NRC helped Saied and Sara claim their right to an education pass and start school in Iran.

Maryam now makes a living decorating scarves and gets paid weekly. She is also hoping to learn to read and write.

“I would like to buy a sewing machine, receive orders and work for myself. If I can do that I will control the money I earn and my life will improve,” says Maryam hopefully.

Our work in Iran

There are between 3 and 3.5 million displaced Afghans living in Iran. Some have been in the country for four decades.

In 2019, NRC supported over 91,000 vulnerable individuals in the country, including displaced Afghans and Iranians affected by natural disasters.

The project that Maryam benefitted from is part of a two and a half year project called “Enhanced Access to Rights, Essential Services and Livelihoods for Vulnerable Afghans Displaced in Iran”. The project began in January 2019 and is funded with the generous support of the European Union. This project is led by NRC, in partnership with Relief International, and the International Consortium for Refugees in Iran.

Between July and December 2019, IPA activities were carried out in two provinces of Iran benefitting 1,148 people.

With over 140,000 cases on 28 May, Iran has one of the highest numbers of confirmed coronavirus cases in the Middle East and Asia. The first two deaths from Covid-19 occurred on 19 February 2020, unexpectedly. The virus quickly spread.

NRC rapidly adapted its programmes to focus on the immediate needs of vulnerable populations at risk of Covid-19. We are actively advocating for the importance of water, sanitation and hygiene (WASH) activities, and are providing soap, hygiene kits and information about coronavirus preventative measures to households as well as janitorial kits to health centres in areas highly populated by Afghans.

But we are concerned that people like Maryam, who received assistance before the Covid-19 outbreak, are losing their sources of income. Therefore, in addition to resuming the pre-planned interventions such as providing IPA and constructing and renovating classrooms, NRC is planning to implement early recovery activities as soon as possible. This will be delivered mostly through cash-based distributions and when the situation allows, further access to vocational training and business grants. We are negotiating with authorities so that we can support vulnerable Afghans with cash assistance through direct bank transactions for documented Afghans, thanks to further European Union funds, and other donors.

Read more about our work in Iran