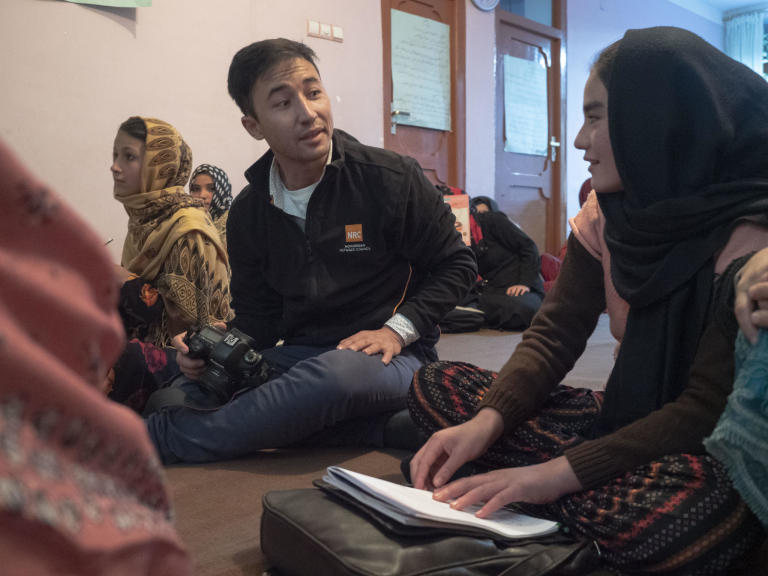 
The girls in the Afghan dream academy

Roald Høvring Published 15. Oct 2020 Edited 13. Oct 2020
Afghanistan Education
Read caption NRC photographer and interpreter, Enayatullah Azad, in conversation with some of the girls in the class. Photo: Ingrid Prestetun/NRC
Forty pairs of shoes are neatly lined up on a concrete staircase outside a simple grey entrance door. This is no ordinary school. It is the home of a generous neighbour who has made parts of her house available to 40 girls dreaming of an education and a profession.

Most of the girls are between 10 and 16 years old and come from families forced to flee the conflict in Afghanistan. Now they are participating in a programme organised by the Norwegian Refugee Council (NRC), where they have the opportunity to make up for lost schooling.

They want to be teachers, doctors and everything else that girls dream of becoming.

The class is part of a special educational initiative called the Better Learning Programme, which is designed to help students reduce their mental stress and strengthen their learning ability. The programme also consists of a series of physical exercises.

More than just learning to read and write

The teacher offers to show us some of the exercises. She asks the girls to stand against the walls to free up space on the floor. Five large sheets of paper are laid out on the floor, like small green islands on a blue sea.

The teacher strikes up a song, and the girls move around on the floor. When the song stops, they rush towards the nearest “island”, plant their legs firmly on the green sheet and hold onto each other. They stand close and keep a firm grip on their neighbour, so that no-one falls off the “island”.

It seems to me, as I watch, that this is a reflection of life. That we have to work together and support each other so that no-one ends up left behind. The teacher confirms my thoughts. Simple exercises like this have helped the girls get to know themselves and become part of a good learning environment.

Girls in areas affected by war and conflict are nearly two and a half times more likely to miss out on education than boys, according to UN figures. And when they reach secondary school age, nine out of ten girls in conflict-stricken countries are out of school.

Of the 3.7 million children out of school in Afghanistan, six out of ten are girls. In some provinces, as many as 85 per cent of girls are not in school.

Afghan women and girls who have been forced to flee their homes face significant constraints when it comes to accessing education, healthcare and paid work, according to a 2015 report from NRC. Seven out of ten say they have never been to school.

The girls say that their parents cannot read or write. One girl tells us that she is the only one in her family who has gone to school.

I ask them what they like to do in their spare time. One answers that she likes to watch TV. Most of the girls nod in agreement. They also like watching TV – preferably music videos.

A tall 16-year-old in tight-fitting jeans and a black leather jacket stands up. A pink shawl hides some of her long black hair. She raises her hand: “My favourite artist is Aryana Sayeed,” she says with no hint of shyness.

The female artist Aryana Sayeed is a megastar in Afghanistan. She has been a judge on the Afghan equivalent of The X Factor – Afghan Star. She lives in Canada, but often visits her homeland, where she holds concerts and performs songs about love and freedom.

I ask the girls how many of them want to be housewives. No-one answers. They smile, giggle and look at each other. If they fall victim to the statistics, one in three will get married before they turn 18.

Today, the UN ranks Afghanistan as one of the world’s least equal countries, and fewer than two out of ten women can read and write.

It dawns on me that this is more than a classroom. It is a sanctuary where the girls can relax, say what they think and feel, and cultivate their dreams.

(The interviews were made in December last year, before the pandemic also closed schools in Afghanistan)