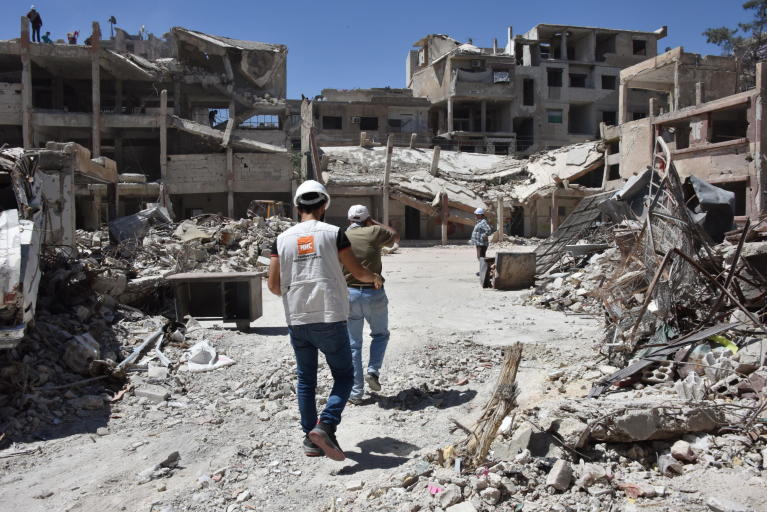 By Tareq Manadili Published 29. Jun 2020
Syria Children Education Syria crisis
Read caption Workers are restructuring this school building under NRC supervision in Harasta, Eastern Ghouta. Photo: Tareq Mnadili/NRC
Imagine your school being a constant reminder of the trauma of war. This is the case for children across Syria, whose schools have been severely damaged by the conflict. In Eastern Ghouta, a suburb of Damascus, the Norwegian Refugee Council (NRC) has supported the rehabilitation of schools and provided education support so that children can go return to learning without being haunted by the past.

The education sector in Syria has suffered greatly since the war began in 2011. According to the United Nations Children’s Fund, two of every five schools have been damaged or destroyed. An estimated 2.1 million Syrian children have been denied access to learning opportunities due to displacement, active conflict or school closures.

We believe that education is one of the essential pillars of humanitarian assistance and a fundamental right for every child. Therefore, we are working to rebuild damaged schools and support teaching staff and parents so that children can begin to look towards the future.

Children are the key

Manal, 35, is a teacher from Harasta in Eastern Ghouta, an area heavily damaged by the conflict. She believes that children are central to restoring Syria’s future.

“What matters for me the most is that even though the classroom lacked windows and doors and there is debris scattered everywhere, inside it, there is a teacher who is working hard to educate the students and support them,” shares Manal.

But for her son, who is in first grade, it was harder to see beyond the damage. “School was his least favourite thing to do,” she recalls. “Every morning he would cry and say that the school building was ugly and damaged.”

Schooling in Eastern Ghouta was at times disrupted while the area was under siege for three years, with some students having to carry on with classes in makeshift facilities or stay home. In 2018, following the change in territorial control, some displaced people began returning to the area leading to an increase in the school-age population.

In 2019, NRC began its Creating Welcoming Schools programme aimed at providing children with a quality learning environment. It involved not only the renovation of damaged buildings, but also equipping classrooms with desks and other materials, as well as providing training, coaching and mentoring to teachers and administrators. We also designed and implemented children-led activities for both children and parents.

The result? Teachers can foster more effective learning, classrooms are less crowded, and students don’t have to travel such long distances to reach school. The protective environment means that children can enjoy coming to school and can once again focus on their studies, which will reduce drop-out rates.

Manal has seen a dramatic improvement for her son. “After the rehabilitation of the school by NRC, my son’s spirits lifted, and he is happier than ever. Every night, he prepares his books, school uniform and the equipment he needs to participate in the activities,” says Manal.

Manal also feels the impact herself. “The new shape of the school, the beautiful drawings on the wall and the new way of teaching are what I like the most,” she explains. “Now I can better understand the child’s psychology, how to put myself in their shoes, to know their needs and feelings and in return deliver them the information through creative learning activities.”